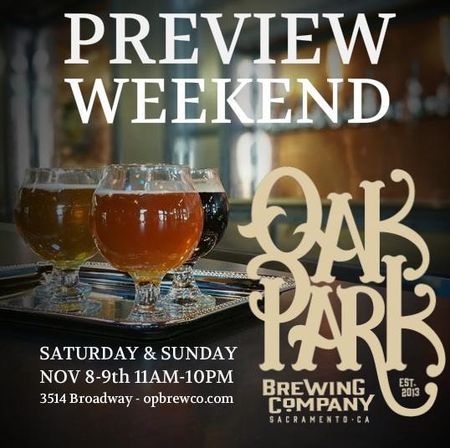 Oak Park Brewing Co. will open its tasting room for a preview weekend on Saturday Nov. 8, it announced via Twitter on Monday.

The tasting room is located at 3514 Broadway, and will be open from 11 a.m. to 10 p.m. on both Saturday and Sunday. They plan to serve several beers, a limited menu from their kitchen along with some non-alcoholic options such as root beer and cream soda.

Back in Sept., they announced that they would be open in late October. Credit to the owners for providing a pretty accurate estimate.

Unlike some of the other tasting rooms that have opened recently, Oak Park Brewing Company also intends to serve food, according to an interview on Beers in Sac.

In a recent interview with the Sous chef, Eric Marais, I learned what might make OPBC different from the rest. Eric is a local chef, trained first at the American River Community College Restaurant Management program, and then at the Culinary Institute of America in San Francisco...

Eric returned to Sacramento in 2000, and cut his cooking teeth at several local restaurants, including Tuli Bistro, the Waterboy, and One Speed before learning about the vision of OPBC. Eric explained it as an affordable, fine- dining experience inspired by fresh, local ingredients, and a menu created in collaboration with the beer. Think Magpie at a brewery. This goes far beyond pub food. Eric noted, “This won’t be freezer to fryer. It’s farm to fork.”

The owners also gave a video update on the progress the brewery was making last week.

Oak Park Brewing Co. can be found online at http://www.opbrewco.com.

Bacon and Butter: Go for the Burger - while I’ve tried many exciting, memorable dishes at this hot new establishment, Zoellin’s burger may just take the cake. The menu changes frequently, so I can’t promise you’ll find the same version when you drop in, but I have enjoyed both a lunch version (embellished with thick-sliced bacon, arugula, and tiny, crisp shallot rings) and a breakfast version, topped with a sunnyside-up egg. Kira O'Donnell in Sac Mag.

The Waffle Experience: Waffles for days - And here’s the rub: The ideas are great, the flavors well balanced, but the waffles are sort of tough. In some cases, this works to an advantage, as when a grass-fed beef burger is paired with the leek waffles and garlic aioli. They stand up well to the juicy meat and tomatoes. At other times, as with the berry-topped waffles, they are a bit overworked. Liège waffles are supposed to be crusty and dense, but these often seemed heavier than ideal. Ann Martin Rolke in Sac News & Review.

Let's eat: Three places to try around town - Looking for somewhere different for lunch? Our three places to try this week include a place adding wine and beer to their cheese and meat offerings, an upgrade to a restaurant and a family-owned Mexican restaurant in Folsom. Featuring The Culture & The Cured, 33rd St. Bistro, Mexquite Mexican Cuisine in Folsom. Andrea Thompson in Sac Biz journal.

VIDEO: Bacon And Butter Is Back - Bacon and Butter is back and at a brand new location Tina Macuha joins us live. And she picked up a shift. On Good Day Sac Part 1 | Part 2.

VIDEO: Gary Samples the Brew at Samuel Horne’s Tavern - FOX40’s Gary Gelfand gets a taste of the last stop on the Migration Tour that started in Miami back in March. Some of the best barrel-aged craft beers in the country. On FOX 40.

There isn't a Culinary Institute of America in SF. Did they mean California Culinary Academy? Or CIA in St. Helena? This is probably a point of pride for Chef Marais.