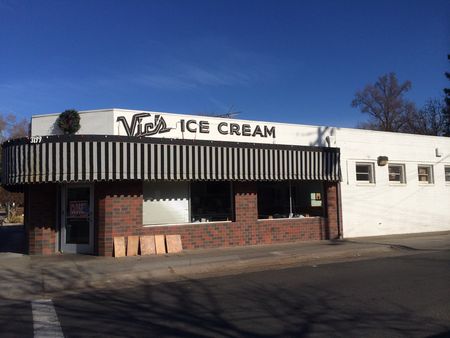 Vic's Cafe, the addition to the beloved ice cream parlor next door, has applied for a license to sell beer and wine, Cowtown Eats learned in a visit over the weekend.

The cafe, not yet a year old, plans to expand its evening business by serving alcohol. Since its opening, it has expanded from a very limited menu serving just coffee and breakfast pastries to lunch items such as wraps. This is the latest in their expansion plans, although they are not yet sure if they will expand their hours. 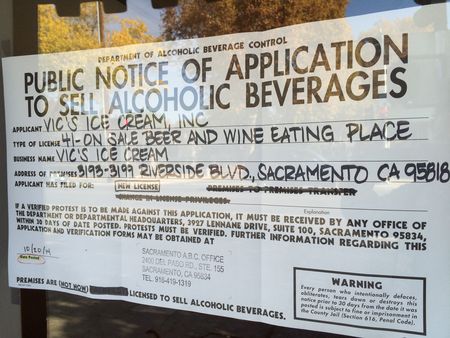 As a neighborhood resident, I'm very excited for another venue to grab a beer or a glass of wine within walking distance. Just a week ago, a group of friends and I had dinner at Masullo and wanted another after dinner drink, but felt guilty taking up table space with a line of diners waiting to eat. Nearby Riverside Clubhouse wasn't a real option since their bar is always busy on the weekend. We settled on Iron Grill, an adequate choice, but with a limited wine list.

Per the store personnel, the public notice has to be up at least 3 months before they can start serving alcohol. The posting went up on Oct. 20, which means that the end of January is the earliest they can start serving beer and wine. The type of liquor they've applined for will not allow Vic's to serve hard liquor.

I hope the Vic's Cafe team builds a great wine and beer program. The demographics of the neighborhood would certainly support a sophisticated and unique menu.

I can't wait to finally have a place that I can walk home from after several drinks.

Vic's Cafe is located at 3193 Riverside Blvd., and can be found online at http://cafevics.com/.

Shady Lady owners take over Monte Carlo Club - One of Sacramento’s oldest bars will debut in February with a new name and ownership team. The owners of Shady Lady Saloon at 14th and R streets – Jason Boggs, Alex Origoni and Garrett Van Vleck – have taken over the Monte Carlo Club a block away at 15th and S streets. The bar, which is undergoing a remodel, will debut in February with a new name, B-Side. Bret Bair, co-owner of Ace of Spades music club and Goldfield Trading Post, serves as the landlord. Chris Macias in the Sac Bee.

Streets of London changes owners, but fish ’n’ chips stay great - The recent newspaper ad caught our attention: “Keep calm. We are under new ownership.” Egad! Nobody called to tell us. Turns out the time-tested Streets of London Pub has simplified its name to Streets, expanded its menu and slicked-up its logo to show profiles of Sacramento’s Tower Bridge and the Tower Bridge in London. Allen Pierleoni in the Sac Bee.

The Best Thing Since Sliced Bread - I have loved sandwiches since I was a little kid.  Growing up in Ireland, my Mom always made me a packed lunch to take to school, a tradition she continued well into my high school years.  Everyone at school knew about my mom’s sandwiches, and she would often make me extras to share with “the boarders”—the students who lived in dormitory during the week and supplemented their cafeteria diet with large quantities of sugary snacks from the tuck shop.  The best sandwich my mom made, (and I’m hoping she will make when I visit over the holidays, wink!) is the roast chicken sandwich, which includes white and dark meat, sausage stuffing, arugula, mayonnaise, and a few slivers of red onion.  This was usually served on a perfectly fresh and crunchy French baguette.  I think because my mother is an artist and interior designer, she can’t help but express her superior understanding of the intricacies of flavor and texture and proportion even when making a humble sandwich. Featuring Dad's Sandwiches, Cafe Rolle, Corti Brothers, Juno's Deli & Mr. Pickles. Laurn Norton on Girls on the Grid.

Drought-defying tomato harvest breaks California record - In a year when most commodities saw declines in production, the tomato crop was 16 percent larger than last year. It surpassed the old record of 13.3 million tons harvested in 2009, according to the California Tomato Growers Association. Dale Kasler in the Sac Bee.

New locations open doors in Town Center - El Dorado Hills Town Center is continuing to expand and offer new retail and restaurant options to the community...After successfully opening four restaurants in the Sacramento region, Jason Enyeart recently launched Hop House next to Bistro 33 on the Waterfront. “I’ve worked in the restaurant business my entire life, starting as a busboy and working my way up the ranks,” Enyeart said. Laura Newell in the El Dorado Hills Telegraph.

VIDEO: How a Tweet Nearly Cost a Wine Maker their Liquor License - Simple tweets are causing some trouble for some local vintners and brewers who wanted to get the word out about a Sacramento event. Grape Escape was billed as one of the largest wine tasting events in northern California this summer. SaveMart sponsored the event. But if you’re one of those providing the booze, you’re not allow to say so. Ben Deci on FOX 40.

VIDEO: Mayahuel Margaritas - Today we are getting a special treat from the people from Mayahuel's in Sacramento! They're in studio making us some of their delicious cocktails. On Good Day Sac.

VIDEO: Golden Ox Restaurant - It's one of our favorite breakfast spots in Lodi, The Golden Ox. Heather Brent is there to check it out. On Good Day Sac.

VIDEO: Bloody Mary w/ Slider - Bloody Mary is a part of many people's Sunday morning. Inferno Sports Bar in Citrus Heights takes their bloody to another level, so we sent Cambi Brown to check it out. On Good Day Sac.