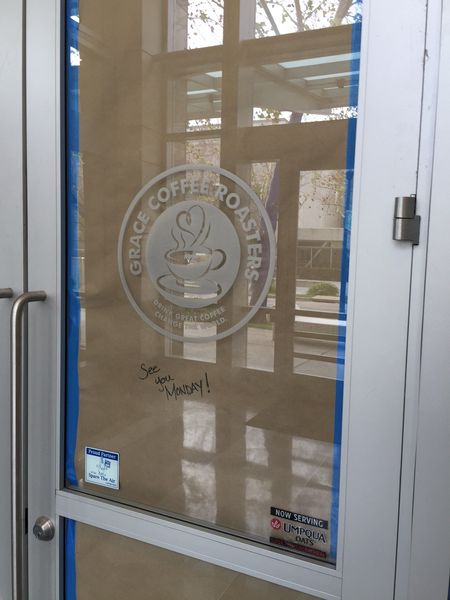 Not only does Grace Coffee Roasters serve high quality, but owner Gary Davis donates 10 percent of his profits to Courage House, a local home for girls rescued from sex-trafficking. Davis also serves as the mayor of Elk Grove.

Here's more about Davis, from a Sac Bee profile in July 2014:

“We didn’t just want to start a for-profit coffeehouse,” Davis said. “One of the highest rates of sex trafficking in the country is in Sacramento. We wanted to know what we could do to make a difference. We approached (Courage) and they were all over it.”

“His passion is to open a coffeehouse and to make a difference. He wanted to bring more awareness to Courage Worldwide,” said Stephanie Midthun, a Courage Worldwide community resource director. “Every chance he’s got, he talks about coffee and how to help the girls here. He’s done a lot to talk about the trafficking of children in the U.S. That’s his passion.”

This is the third location for Grace Coffee Roasters, with the other two in Elk Grove.

The coffee house plans to open at 7 a.m. on weekdays and 8 a.m. on weekends, closing at 5 p.m. everyday.

Find them on Facebbok at https://www.facebook.com/GraceCoffeeEsquire.

Old Soul Not Expanding at Little Prague in Davis - I received confirmation Thursday that “the landlord and Old Soul have decided to consider and pursue other opportunities” regarding the former Little Prague site at 330 G St. Wendy Weitzel in the Davis Enterprise.

Good Eats: Smoke ’em if you've got ’em - Don’t expect ambiance, because Good Eats is all about the food. There are tables with silverware, and a big-screen TV, but it’s dark and almost literally a hole in the wall. Ten months ago, McFadden carved out a dimly lit space behind a hastily erected wall, just off a big commissary kitchen...All the fried items are cooked to order and show off McFadden’s skill. The fried chicken dinner arrives with three big pieces that are thickly battered and darkly fried. The meat bursts with juice under the slightly peppery crust. Ann Martin Rolke in Sac News & Review.

Revolution Wines flies flag for Sacramento terroir - Haarmeyer is the head winemaker at Revolution Wines, a boutique urban winery in midtown, and proudly flies the “made in Sacramento” flag. He takes to social media with the #sacterroir hashtag to show his local pride in cyberspace. Sometimes he feels like an army of one. “It’s an uphill battle,” Haarmeyer said. “Most folks think ‘real’ wine couldn’t come from Sacramento, but it could come from Napa or the foothills.” Chris Macias in the Sac Bee.

Yang’s goes from good to great - I had not been to Yang’s since my positive review of this Chinese noodle joint in May, when I described it as “brightly lit, slightly shabby” and with “an almost fast-food feel.” Now that’s old news. Restaurateur and investor Jack Suh bought the place, shut it down for renovation in July, and then reopened it with a new look without losing what we loved about Yang’s in the first place – the amazing soup and noodle dishes. Blair Anthony Robertson in the Sac Bee.

VIDEO: Kick Off the New Year at Vito’s Ristorante - The morning crew got to enjoy a taste of what Vito`s Ristorante plans to serve to their guests for their New Year`s dinner. On FOX 40.

VIDEO: Beer and Pizza Pairings - Kristin Marshall is at The Tap Room checking out the best pizza and beer combination. On Good Day Sac Part 1 | Part 2.