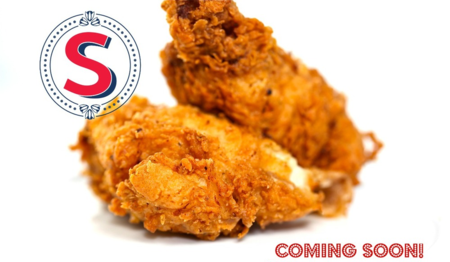 South will finally open on Tuesday, the restaurant announced on Facebook.

It had an inspection today, but some "minor fixes" were required. The inspector will return on Monday and the restaurant expects to be open the next day.

Here's a little more on the restaurant from Tori Masucci Cummins in Sactown Mag.

Other big news for the restaurant is that a new executive chef is coming on board: Rachel Kelly, formerly of Revolution Wines and Ella...Kelly has a fresh vision for South’s menu, mixing Southern influences with a clean California edge.

With the tagline “tradition reinvented,” the restaurant’s menu will be split into “old school” and “new school” eats. Look for classic items like the signature fried chicken (N'Gina’s mother’s recipe; it’s seasoned inside and outside) and a crispy fried tiger shrimp po’ boy. Fun twists on Southern staples will include Carolina rice balls (a twist on arancini) and a deep-fried oyster and steamed crayfish Louie.

Owner N'Gina Kavookjian also took to her blog to describe the anxiety involved in opening a highly anticipated restaurant.

The hype is getting to me...

We have been blessed with the attention, the articles, the blog love that we have received over the past two years, but I find myself in these really shitty panicky moments of feeling like all the hype about South could backlash against us. That Sacramentians that crave the next "it" spot may put us on pedestal that, not only did I not want to stand on, but could not live up to in the imaginations of what some people perceive South to be.

I'm really excited to give the restaurant a try and to experience it as the owners have conceived.

South is located at 2005 11th St, and can be found online at http://www.weheartfriedchicken.com/.

Not hipster-famous—yet - Our humble city's getting some national recognition on an episode of a show called Carnival Eats—airing on Food Network, the Cooking Channel and Great American Country—in which host Noah Cappe visits the California State Fair. In the episode, he'll sample the fair's “spaghetti ice cream,” (ice cream shaped like spaghetti and topped with a strawberry sauce) and lobster corn dogs. Jonathan Mendick in Sac News & Review.

Fahrenheit 250 raises the bar for barbecue - Ray Lettini and Gino Sardo opened Fahrenheit 250 in March. The primary concept was to offer quality meats cooked low and slow in the smoke of locally seasoned oak and fruit woods. This alone could set the restaurant apart from so many other barbecue joints that par cook meat before hot-smoking it, and which use wood pellets to create that smoke. But when you add in the other aspects of Farenheit 250, such as knowledgeable servers providing full table service, creative housemade side dishes and carefully crafted cocktails, you get a stand-out restaurant. Andrea Thompson in Sac Biz Journal.

VIDEO: Store In Roseville Claims To Have World's Healthiest Donuts - Dr. Bob's Donuts says they have the world's healthiest donuts. On CBS 13.