The space near the new Kings area is scarce and coveted. A developer tells CBS 13 that local restaurants will be filling out much of that space.

"We're still looking at incorporating some live music into our project," said Garrett Van Vleck, one of the owners of Shady Lady told CBS 13's Lemor Abrams. "But it's not going to be the total main focus as it originally was." 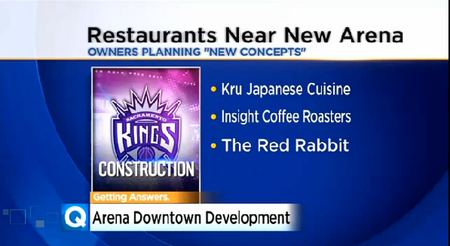 Other restaurants that will fill the 7th & K space will be concepts by Kru's Billy Ngo, Insight Coffee Roaster and Red Rabbit.

Counter Culture: Players Sports Bar & Grill needs a new food game plan - In this case, the sports bar and grill is all about the sports and the bar, and not the grill. We left long before Dallas got lucky with a recalled defensive pass interference call and won the game.  Allen Pierleoni in the Sac Bee.

Saffron Grill Cuisine: A new Persian empire - Diners can even try a taste trip to Iran via the Persian restaurant Saffron Grill Cuisine. In its second year, this family-run spot is an inviting way to experience something new. Saffron Grill is run by an Iranian-born husband and wife who base their dishes on family recipes. As with other Middle Eastern cuisines, the menu features rice, stews, salads and nuts. Persian food, though, is characterized by lots of saffron, pomegranates, walnuts and a sweet-and-sour profile. The restaurant space is small but warmly decorated, with twinkling lights and saffron-hued walls. Ann Martin Rolke in Sac News & Review.

Lola's Lounge - When you hear consistently good things about a restaurant, you are tempted to go and check it out for yourself. This was the case for me for Lola's Lounge in old downtown Elk Grove.  Word of mouth had been good and this was the night before BAR's not so enthusiastic review in the Bee came out. I'm glad I ate there before I had read his review. Catherine Enfield on Munchie Musings.

Try It: 33rd Street Bistro's Bag o' Doughnuts - It’s been quite a while since I’ve visited 33rd Street Bistro on Folsom Boulevard. But recently I had the good fortune of breakfasting twice at this popular East Sac dining institution—and both times enjoyed great meals and attentive service...But the most entertaining (and caloric) nosh was the kitchen’s made-to-order Bag o’ Doughnuts, tossed lavishly in sugar and served up with honey butter, a dense fudge sauce and juicy strawberry compote. Kira O'Donnell in Sac Mag.

Two eateries join Carmichael's planned public marketplace - A culinary hub that's in the works in Carmichael has secured its first two eateries. Mesa Mercado and Ghiotto Gelato have joined the lineup at Milagro Centre, which is billed as "Carmichael's gathering place." The retail center, which is patterned on public marketplaces, will transform the space filled by the forlorn Hillside Shopping Center on Fair Oaks Boulevard. Sonya Sorich in Sac Biz Journal.

VIDEO: SnoBites Ice Shavery and Teas - Satisfy your sweet tooth that allows you to make your own treats! Cambi Brown on Good Day Sac Part 1 | Part 2.

VIDEO: The Double Barrel Smokehouse in Lincoln - Would you be willing to try armadillo legs or frog legs? This restaurant is giving you the opportunity to try some exotic cuisine! Morgan Ragan on Good Day Sac.

VIDEO: Let’s Do Lunch -  Tina Macuha is catching up with her friends at Lido Cafe in Carmichael. On Good Day Sac.

VIDEO: Duke’s Plates and Pints at Arden Town Shopping Center - Just because this tap house has a multitude of beers, there is something for people of all ages! Cambi Brown on Good Day Sac.

VIDEO: Eat Healthy While Dining Out at Cafe Bernardo with Chef Kurt Spataro - There are ways to eat healthy while eating out and Kristin Marshall is finding out how! On Good Day Sac.