Dining News: New Rocklin Theater Brings Beer to Your Seat, Even During Movie

Studio Movie Grill, a Texas-based theater chain, opened a new location in Rocklin in December, and it's probably the best movie theater experience I've ever had.

(Disclosure: I was invited to the neighborhood/media preview night, so our movie, meal and a bottle of wine were comped to those who attended that night.)

First, a little about the concept of the theater. Studio Movie Grill's business model is to combine dinner and a movie. When you first walk in, there's a full bar where you can order food or drinks, if you arrive a little early. Don't worry about standing in line - you've already reserved your exact seat when purchasing a ticket, like you would at a sporting event. No more waiting in the cold outside a theater to make sure you're not sitting in the front row. 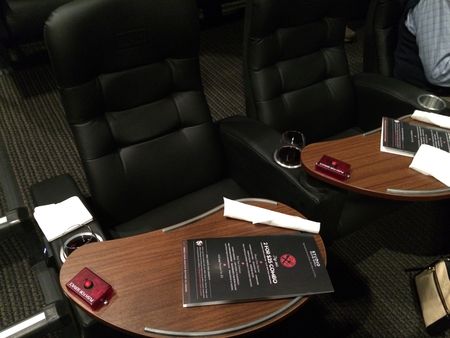 When they let you into the theater, you'll find the chairs are the most comfortable seats you've ever sat in at a movie theater. One of my biggest gripes with theaters is the lack of leg room. Fortunately, there's plenty - like I stuck my legs straight out while seated and couldn't touch the row in front of me.

There's a button you push on the little table (think college lecture hall swinging table) and waiters come to get your order. There's a full menu of appetizers, salads, burgers, pizzas, etc. and drinks - both with and without alcohol.

They'll do their best to bring you your food before the movie starts, but if they don't - it's not a problem. They'll bring it to you while the movie's playing.

If you want to order more food during the movie or want another drink, hit the red button, and a very curteous waiter will come take and deliver your order.

Before I got there, I wondered if we'd be able to see our food while the lights were off in the theater. Smartly, they left the lights along the side of the theater on so you could see your food.

As for the quality of the food, it was decent - like an Applebee's. It's not going to win any Michelin stars, but it's perfectly acceptable. Pro tip: Order something you won't have to spend much time looking at to eat. I ordered a salad and I had to constantly look down to continue eating. It led me to miss more of the move than I would have liked. Next time, I'll stick with finger foods or pizza.

The only problem for those who live near downtown is that it's a good 24 mile drive each way. I probably won't make it a monthly habit, but if there's a big, blockbuster move I really want to see, the first place I'll try to see it at is Studio Movie Grill. 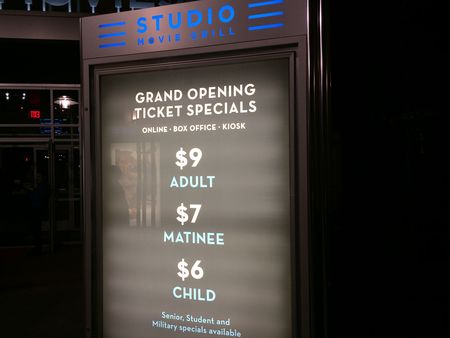 I encourage you to go and give it a try. It might ruin other theaters for you, but it's a unique & well-executed concept.

Studio Movie Grill is located at 5140 Commons Drive in Rocklin and can be found online at https://www.studiomoviegrill.com/.

Rocklin theater now offers dinner and a movie in style - Paul and Debbie Porter weren’t going to leave the comfort of home without some serious enticing. The Granite Bay couple had gotten used to streaming movies through Netflix, watching them at home on their 65-inch, curved-screen, ultra-high-definition TV. But Tuesday night, the Porters eagerly left home for a new Sacramento market offering: a movie house turned dinner theater with creature comforts, expansive food selections and alcoholic libations. Peter Hecht & Carla Meyer in the Sac Bee.

Finally! Dinner at the Movies - Studio Movie Grill - For ages I have been wanting Sacramento to get one of those theaters where you get to dine while watching the movie.  I was thinking more like the eclectic places like Foreign Cinema in San Francisco or Five Star Theater in Glendale. The new Studio Movie Grill has taken the concept mainstream and is opening up theaters across the country. Ours is in Rocklin at I-80 and Sierra College Blvd. Catherine Enfield in Munchie Musings.

What to expect at restaurant-movie theater in Rocklin - I recently traded my standard movie theater dessert, Sour Patch Kids, for a hand-delivered cup of frozen hot chocolate topped with Ghirardelli fudge. Somehow, I survived. Sonya Sorich in Sac Biz Journal.

VIDEO: Studio Movie Grill - Cody Stark is at a movie theater that delivers the food to you while you enjoy the newest films. On Good Day Sac.