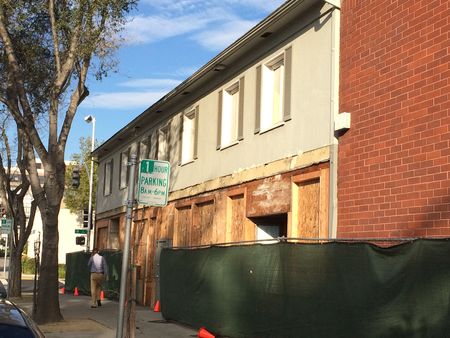 Status of restaurant on Monday afternoon.

Paragary's Bar & Oven, which closed in Feb. 2014 for a major facelift, has delayed its reopening until March, Cowtown Eats has learned.

Paragarys had initially hoped to be closed only two months, but the project will ultimately last at least 13 months. As recently as August, the owners hoped to have the restaurant open by January. Unfortunately, $600,000 remodelings take time. This is how the restaurant group's PR staff explained the delay:

We did encounter some permit delays that slowed things down a bit. The building that Paragary's is located in is over 100 years old and houses our corporate office upstairs, so we had to make sure that everything was updated to meet current structural and electrical requirements before we could continue construction.

The restaurant had been open 26 years prior to the current construction. It's taken longer than hoped, it's better to get it done right than just done quickly.

I was hoping to get to eat there during Dine Downtown again. I at there several years ago and was pleasantly surprised by the quality of the cuisine. I look forward to giving the remodeled digs another visit when they reopen.

When Paragary's reopens, it will be located at the corner of 28th & N Streets.

Asian Sweet Treats Part 2 - Frozen Delights - Often it seems like Sacramento is one of the last to the party in terms of some food trends. In this case, we are the leader and these Asian treats will become more in the mainstream market - not just a favorite with Asians, but with anyone with a sweet tooth. Asian snack food chains Quickly and Lollicup have been spreading, so it's easy to imagine that more of these Asian snack trends will as well. The first one was Vampire Penquin, which opened in Little Saigon and quickly became popular as word spread of their new treats...Next on the scene was Chelo, located in the Filipino mall at 611 Mack Road...Two more frozen treat places are Snowbee Tea Station and Snobites. Catherine Enfield in Munchie Musings.

Don’t pound beers, beers won’t add pounds - Can beer be part of the equation when you sit down to scribble out your do’s and don’ts for 2015? Can you say goodbye to the beer belly without bidding adieu to the beer? I have good news. The answer is yes. Sort of. Blair Anthony Robertson in the Sac Bee.

Psst! Here’s How To Drink at a Speakeasy Taproom - Leave it to a meticulous craft brewer to carefully curate a tasting-room experience as daring and delightful as the suds on tap. The recently opened Ruhstaller taproom downtown combines the exclusivity of a Prohibition-era speakeasy with the down-home earthiness of a Sacramento farm. If that sounds daunting, fear not: We are here to give you the inside scoop so you’ll feel like a quaffing pro. Janet Weeks in Sac Mag.

VIDEO: The Pancake House - Morgan Ragan is  at the Original Pancake House finding out about their special pancake dough that takes 5 days to prepare! On Good Day Sac.

VIDEO: Baagan Restaurant - It's officially cold and flu season, so we're at a local restaurant making and trying out their Indian Kitchari soup! On Good Day Sac Part 1 | Part 2.

VIDEO: Dishin’ With Tina: Jojo’s Pizzeria - Tina Macuha is at Jojo's Pizzeria where they're dishing up some delicious pizza. On Good Day Sac.