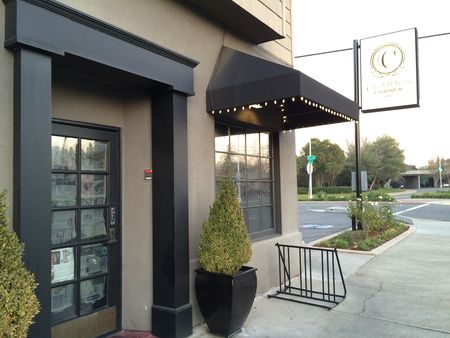 The restaurant, located just a stone's throw from Sac State at 57th & J, has not only closed its doors but covered its windows with newspaper. Its outdoor furniture remained on the patio, though.

Clark's Corner has also taken the unusual step of erasing its digital footprint, taking down its Web site and deleting its Facebook page and Twitter account. A cached version of its Facebook page gave no indication the restaurant was about to close. 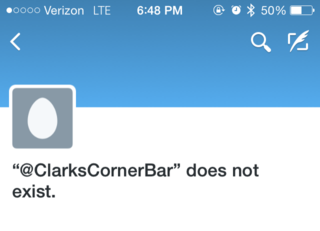 The owners left no signage to explain the abrupt closure and calls to the restaurant's phone number went unanswered.

The restaurant had recently hired Stan Moore (formerly of Tuli & Capital Dime) to become its executive chef. In September, the chef did a segment on Good Day Sac about creating the craziest hot dog in the NFL.

The first place I saw the closure reported was by the Sac Bee's Chris Macias on twitter.

VIDEO: Toby Keith Restaurant Closing Abruptly In Folsom - A country music-themed restaurant in Folsom is ending on a sour note as Toby Keith’s I Love This Bar And Grill is closing after two years.
Employees at the restaurant got word they would be losing their jobs over the holiday. Maria Medina on CBS 13.

Dr. Bob's vegan, gluten-free doughnuts barely resemble doughnuts - Dr. Bob’s doughnuts are vegan, gluten-free and steamed. They are round, but there’s no hole in the center. A heart is stamped in its place instead. They require toppings. And a spoon. Can they even be called doughnuts? Tasha Richards, a co-owner of Dr. Bob’s Donuts & DoYos, argues yes—but not super convincingly. Janelle Bitker in Sac News & Review.

Truffle Troubles - A looming global chocolate shortage threatens to damper the holiday season, but local businesses have yet to feel effects. John Blomster in Comstocks Mag.

Three New Pizza Joints in the Sacramento Region - Sacramento’s pizza scene has been straight up killing it for years! Masullo? Ah-freaking-mazing! Hot Italian? Consistently mind-blowing! OneSpeed? Yes, please! So the question is, can the Sacramento region handle more pizza? The short answer is, duh, you dummy. There can never be too much pizza! On the grid, there are a couple new spots you’ll want to immediately check out: Federalist Public House and Beer Garden (pictured above–2009 N Street, enter through the alley) recently opened in the heart of Midtown to much acclaim (don’t sleep on their amazing breakfast pizzas!). In Submerge Mag.

Slam Dunk: Cookies & Milk is an Epic (and Tasty) Win For Your Late-Night Munchies - After-hours food delivery services are limited when it comes to the proverbial cuisine pyramid, especially in Sacramento. When hunger strikes after a long shift at work or the munchies demand to be fulfilled with salty, crunchy nourishment, two choices appear to be consistent: a 10 p.m. craving for last resort chow mein most likely from a third-string Chinese restaurant, or the typical, medium-temperature pepperoni pie ordered somewhere down the pizza chain. The choices are slim. Do they really satisfy? No. If anything, after consumption, you recite a solid oath in your studio apartment never to order from such establishments again—or at least, until the next late-night shift occurs, the refrigerator is empty and the cycle resets. Enter Cookies and Milk. A convenient-mom-and-pop-style business that answers the calls and online food orders of late-night crowds with its warm, freshly baked cookies packaged with cold cartons of milk right at home. Is this real life? Yes. And it’s delicious. Steph Rodriguez in Submerge Mag.

Eating Farm to Fork in Sacramento - You have to admire Sacramento. After decades of being in San Francisco’s food shadow, a couple of years ago the city declared itself America’s Farm to Fork Capital. And why not? It’s the capital of the biggest food-producing state in the nation, it’s surrounded by farms that grow year-round, and it has the largest certified farmers’ market in California. The Farm-to-Fork campaign includes a showstopper annual dinner for 600 on the city’s Tower Bridge, a cattle drive on the Capitol Mall, and now Foodstock, a music event with a pig roast. Margo True in Sunset Mag.

9 fine soups to warm you up this winter in Sacramento - Winter rain and chilly winds are here, which means it’s the perfect time to bundle up and enjoy a bowl of warming soup. Ranging from savory ramen to rich and creamy chowder, consider trying out one of these nine flavorful offerings from around the region. Featuring The Mustard Seed in Davis, Mayahuel Tequila Museo, Blackbird Kitchen + Beer Gallery, Ryu Jin Ramen House, Pheasant Club, Muntean’s, Ten22 and more. Alex Hernandez in Sactown Mag.