Cowtown Eats
Mon Tues Wed Thurs Fri Sat Sun About
Save 10% on Sip, Date & Dine Event at Capitol Dime on Wednesday, 1/14
What You Missed Over the Holidays 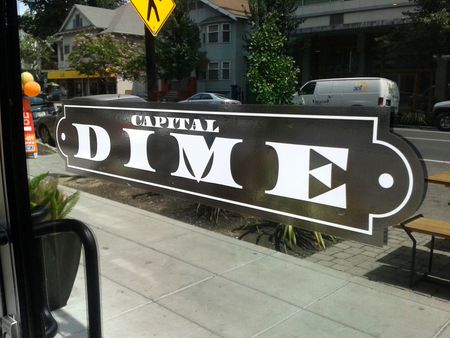 This news nugget was hidden in the long 32 Sacramento Restaurants Opening in 2015 post, but I thought it deserved its own post.

Team Broderick is slowly growing its empire across Sacramento. It started with a food truck, then a brick and mortar location, and then taking over Capital Dime and Trick Pony. What's next? A new seafood concept, co-owner Chris Jarosz tells Comstocks Mag.

I want to do seafood really bad. I used to love going to Blackbird when it first opened up; they would toss an octopus salad in front of me, and I loved it. But a lot of people don’t; you really have to ease them into it. Having a surf-and-turf-style restaurant that has some seafood that’s approachable for people but that also has a little flare is what it’s going to take. I have a concept that I would really like to roll out in the next year.

It's unclear whether this would launch at a new location, or at one of their current locations. Given that Broderick appears to be a success and the recent critical love that the new Trick Pony's received, if they do it at one of their existing locations, my money is on Capital Dime. But that's purely a guess.

I've also covered this ground in the past, but Team Broderick has earned their success the old fashioned way - through hard work. While the rest of us were nursing hangovers on New Year's morning, Jarosz on Good Day Sac promoting the BBQ they'd have that day at Capital Dime.

New Roseville doughnuts are healthy, but how do they taste? - The business boasts "the world's most delicious and nutritious doughnuts." Tasha Richard, its CEO, says her doughnuts are healthy because they're steamed, not fried...But can you have the tasty satisfaction of a doughnut when your order includes multiple references to chia seeds? The short answer: Yes, but if your sweet tooth is strong, you'll have to add lots of toppings. Or go somewhere else. Sonya Sorich in Sac Biz Journal.

Hook & Ladder draws diners with housemade pasta, pizza and happy hour - With cocktails, wine, beer and bites all for under $6, the happy hour is one of the city's most popular. But it's also worth it to pony up the $10 for one of the many house cocktails crafted by bar manager Chris Tucker and his team of bartenders. The drinks menu changes about eight times a year to keep things seasonal. Presently until Christmas, the restaurant is running a "12 days of toddys" special, with a different hot toddy on the menu every day. Andrea Thompson in Sac Biz Journal.

Try It: Oak Park Brewing Company’s Irish Fries - I had a delightful dinner recently at the new Oak Park Brewery on Broadway. The highlight of the evening was the kitchen’s irresistible “Irish fries,” smothered with rabbit gravy and melted Provolone cheese. Kira O'Donnell in Sac Mag.

Fahrenheit 250 has new additions and deals - One of our go-to ‘cue restaurants, Fahrenheit 250, has made some recent additions and added some deals. Yes, it’s known for its smoked brisket, pulled pork and St. Louis-style pork ribs, but let’s look at the menu add-ons. Allen Pierleoni in the Sac Bee.

Midtown Sacramento toy boutique, run by owners of food truck Wandering Boba, closing - A designer toy store in midtown Sacramento is closing, but will continue to operate as an online retailer. Dragatomi, which sells designer toys and art inspired by pop culture, announced in a Facebook post that its store at 2317 J St. will close Wednesday. Sonya Sorich in Sac News & Review.

The Asian Chipotle? - Last month, relatives of the owners of the original place opened a fast, casual restaurant called Viet Ha Noodles & Grill at 2417 Broadway, Suite A2. It has a near perfect rating on Yelp and appears to serve customizable Chipotle-style lunches. Jonathan Mendick in Sac News & Review.

Auburn distiller quickly joins the in crowd of decorated gin makers - An upstart distillery in Auburn received some news that made its year. Darjeeling Gin, produced by Ed Arnold at California Distilled Spirits, took “best of show” for gin and a platinum award at the World Spirits Competition, against such major brands as Tanqueray and New Amsterdam, a subsidiary of E. and J. Gallo Winery. Chris Macias in the Sac Bee.

AUDIO: The Pizza Bible - The main difference between good pizza and bad pizza is the craft. So, if you’ve got “Respect the Craft” tattooed on your arm, you’re probably serious about making pizza. And that’s exactly what Tony Gemignani is: serious about making pizza. It doesn’t matter if it’s New York thin crust or that fluffy ole Sicilian style, the 11-time world pizza champion, and owner of Sacramento’s restaurant Pizza Rock, has made it and probably won an award doing it. Now, he’s got a brand-new cookbook complete with all his acclaimed recipes. “The Pizza Bible” was released in October and has to be one of the most comprehensive pizza cookbook’s ever written. On Capitol Public Radio.