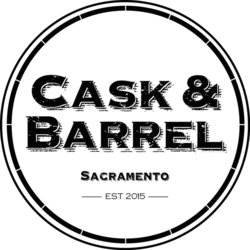 Cask & Barrel has been open less than a month. In that time, they've already started generating positive buzz in the food media. Here's a "first impression" from Chris Macias in the Sac Bee from February:

At $6, the plump skillet of mac ’n’ cheese is one of the best food deals in town. Flavor-wise, with its gooey aged cheddar and bacon bits, it’s also one of the best we’ve tasted in Sacramento...

Overall, the prices at Cask & Barrel are about on point, if not on the cheaper side in some cases, compared to Tank House, Farneheit 250 and other new-school bbq spots around Sacramento...

The food’s off to a solid start, and this concept could stick, especially given its reasonable pricing.

I agreed with much of what Macias wrote. I enjoyed the preview that I attended, and I plan to be back - soon.

Cask & Barrel is located at 1431 Del Paso Blvd., and can be found online atCaskandBarrel916.com. You can also find them on Facebook, Twitter andInstagram.

The Dinner Detective Interactive Murder Mystery Show (March 14 & 28) - Popular all over the country, The Dinner Detective is a fun, award-winning interactive murder mystery dinner show where everyone is a suspect (even you!) and the killer might be sitting at your very own table. The professional actors and producers that put on the show are masters of improvisation, creating unique one-of-a-kind experiences for all patrons. In Submerge Mag.

Ettore’s offerings include breakfast, lunch and dinner - Ettore’s is best known as a bakery that makes world-class cakes, but breakfast, lunch and dinner have been served for years. “There are still people who don’t know we have food,” said Ettore Ravazzolo, who runs the operation with his wife and company vice president, Meggan Rush-Ravazzolo. Allen Pierleoni in the Sac Bee.

Is tipless merely a trend, or dining-out’s future? - A movement around Northern California, and the San Francisco Bay Area in particular, is shifting away from the time-honored practice of tipping servers to simply adding a service charge to the bill. Gratuity has long been included in the bill at Chez Panisse in Berkeley and Yountville’s The French Laundry, and recently become the norm at such Bay Area restaurants as Comal and Trou Normand. In Sacramento, The Kitchen has traditionally tacked on a service charge in lieu of tipping. And now, the seasoned restaurant critic of the San Francisco Chronicle has added his 2 cents on the matter. In a Feb. 17 editorial for the Chronicle, Michael Bauer opined that surcharges and service fees should become the new normal. Chris Macias in the Sac Bee.

Ettore’s: Sweet on Sacramento for 30 years - You remember Gourmet Gulch, right? That stretch of Fair Oaks Boulevard from Howe Avenue to Munroe Street, so named because of its menu of then-iconic restaurants. Places such as Wulff’s, Mace’s, Mitchell’s, Lautrec, Amadeus, Moveable Feast and Fish Emporium. All are memories, but the bakery among them is still there and flourishing like never before. Ettore’s European Bakery & Restaurant celebrates its 30th anniversary today. How is that possible? Allen Pierleoni in the Sac Bee.

Try It: Cibo 7’s Seared Diver Scallops - If you haven’t visited Roseville’s new Cibo 7, I’d encourage you to give it a try. This upscale restaurant is cranking out some really creative and beautiful food, though the (eye-poppingly) high prices may be prohibitive for some. Kira O'Donnell in Sac Mag.

VIDEO: Nat’l Margarita Day - Cambi Brown is learning what it takes to make a great margarita at Mayahuel! On Good Day Sac.