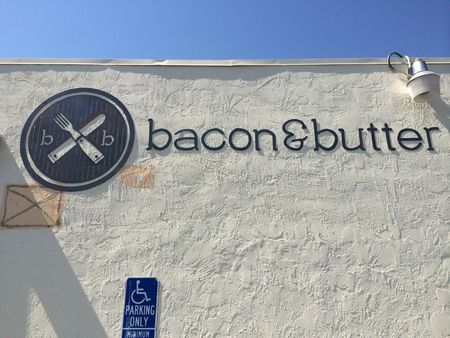 I still haven't braved the long lines to make it out to the new Tahoe Park location of Bacon & Butter. From Ann Martin Rolke's recent review in Sac News & Review, it sounds like I'm missing out.

Owner/chef Billy Zoellin, previously of Golden Bear, has put a lot of thought into this new version of the restaurant. The interior is like a diner, but updated. Sleek subway tiles and metal surfaces balance huge wooden ceiling beams and communal tables.

The food is even more noteworthy. For Sacramentans used to subpar pancakes with a side of clowns, Zoellin’s version of breakfast is a revelation. If you’re wondering how much can be done with bacon, eggs and toast, pull up a chair and prepare to be schooled.

It’s not just that the pancakes (“flapjacks” here) are thicker or the eggs fresher; Zoellin excels at the details that make the food stand out.

The flapjacks are served as enormous disks with a buttermilk tang, topped with diced apples and pure maple syrup. In his take on the benedict, poached eggs top four cheeses grilled on buttery challah bread, with thick-cut Beeler’s bacon and silky hollandaise sauce.

Bacon & Butter is located at 5913 Broadway, and can be found online at http://baconandbuttersac.com/.

Blaze Pizza: A speedy pizza revolution? - Masullo, Hot Italian and Il Pizzaiolo all have a much more obvious enthusiasm for pumping out quality pizzas which Blaze appears to lack with its mind-numbingly repetitive production line. While the fast-casual pizza concept of Blaze is a great idea for picky eaters with very specific topping preferences and families with several growing kids to feed (and without much spare time), there are much better options for quality Neopolitan pizzas in the Sacramento area. Jonathan Mendick in Sac News & Review.

These are the most common restaurant suggestions for Cesar Chavez Plaza - The survey received 191 responses, according to Carlos Eliason, a creative outreach specialist with the city manager's office. Locally sourced food, outdoor dining and lunch service were among the most common requests for the space, Eliason said. Which type of food should be offered? Popular suggestions included Mexican, "California fusion" and Greek/Mediterranean food, according to Eliason. He said there was an emphasis on fast-casual and healthy options. Sonya Sorich in Sac Biz Journal.

Five things to know about the Sacramento co-op's big move - It's a little easier to envision a new Sacramento Natural Foods Co-op location, thanks to renderings of the store's interior...The new store will be in a space bordered by 28th and 29th streets on the west and east, and R and S streets on the north and south. It's near Temple Coffee and the Sacramento County Department of Human Assistance. Sonya Sorich in Sac Biz Journal.

Legacy Crop: With J-E Paino at the helm, can Solano County lead the region to a rebirth of hops? - While Paino continued working with the Utterbacks, he was also getting hops from a few other farmers, including the HopsMeister ranch in Lake County, which, at 30 acres, is the largest commercial hops farm in the state. But in 2013, Paino decided it was time to roll up his sleeves and plant his own. Utterback was willing to serve as his agricultural mentor, so Paino found land at the edge of Solano County and two years ago planted three-quarters of an acre of hops. Allison Joy in Comstocks Mag.