Dining News: What You'll Pay to Drink at the IMAX

Starting today, we are the first movie theatre in Sacramento County to serve BEER and WINE! #esquireimax #beersinsac pic.twitter.com/8tU6QUBoVw

Moviegoers at downtown Sacramento’s Esquire Imax Theatre now can drink beer and wine while watching movies on a giant screen.

But much like their movie tickets, their drinks won't be cheap. Here's what you'll pay for the honor of sipping wine during the next flick you catch there. 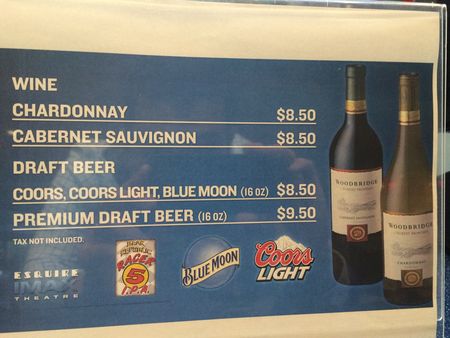 At those prices, only those real die hards who need a $8.50 Coors Light to go with their viewing of Furious 7 will partake. For me, these ballpark beer prices tempt me to behave like a much younger version of myself and sneak a brew into the theater. We'll see if there's actually demand at those prices.

The IMAX theater is located at 1211 K Street, and can be found online at https://www.imax.com/oo/esquire-imax/.

Sacramento Shines at Pebble Beach Food & Wine - A few weeks ago I wrote about how we had a collection of Sacramento chefs going to the Pebble Beach Food & Wine Show. After a tiring weekend of nonstop events, we are all back home and the chefs are exhausted. Unfortunately my press pass was very limited in that I only got to go to the tasting events. No dinners, seminars, or cooking demonstrations. Also no after hours parties and that's where Bill Ngo and Michael Thiemann were.  Never did catch up with Ramon Perez or Ravin Patel. I did catch sight of Kelly McCown as he was leaving. He was done by Saturday afternoon and heading home. Therefore my coverage only extends to Meatopia on Friday and the Grand Tasting Tents on Saturday and Sunday. Catherine Enfield on Munchie Musings.

Is Gyro Supreme planning a new restaurant? - It appears a new future is in the works for a gyro restaurant in Sacramento's Downtown Plaza. Next week, the Sacramento City Council will consider granting Vela Cafe a lease for city-owned property at 1000 I St., according to a meeting agenda. The cafe's owners are listed as Nadeem Haddad and Feras Jowaniyah. Sonya Sorich in Sac Biz Journal.

Downtown restaurant owner buys neighboring building, plans event center - The owner of downtown Sacramento's quirky Jim-Denny's hamburger restaurant has acquired an aging building next door and may turn it into a small events center, according to a broker on the deal. Ben van der Meer in Sac Biz Journal.

VIDEO: Stack’d and Brew’d - Lori Wallace is at a new Woodland restaurant whose sandwiches will have you coming back for more. On Good Day Sac.

VIDEO: Tank House Competed for Chili Master Award - The Sac Beer & Chili Festival was Saturday – and Tank House BBQ & Bar is one of several local restaurants who competed for the winning title. Gary Gelfand on FOX 40.