Dining News: Cielito Lindo to Repoen In The Next Week 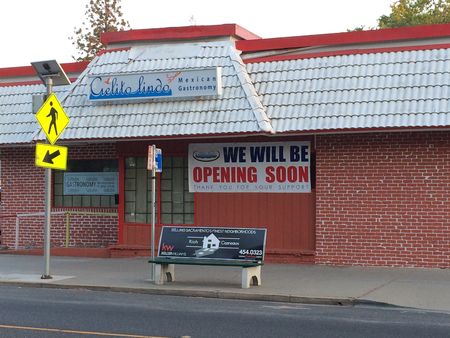 Cielito Lindo, which was ravaged by fire in April 2014, is scheduled to reopen its doors in the next week.

The building sustained approximately $100,000 in damage, per the Sac Bee's Chris Macias in May 2014, and the owner suspected at the time that the fire was intentionally set. At that time, he expected the rebuilding process would take six months, but as usual, it took longer than estimated.

Sac News & Review's Janelle Bitker has more on the reopening:

Now, Alarcon plans to reopen Cielito Lindo (3672 J Street) the first week of May: May 7 or 12, he wrote to SN&R with the help of a translator. The bold, complex flavors and upscale flair will remain, but regular customers can look forward to some big changes as well.

“The seating area will be much larger,” Alarcon said. “We’re adding two rooms and changing the colors. Everything is new and right now it is very pretty.”

The change in the interior design of the restaurant is notable because the Sac Bee's then restaurant critic criticized the drab building while praising the cuisine.

The restaurant originally opened in October 2013.

Cielito Lindo can be found at 3672 J Street, or online at http://cielitolindomexicangastronomy.com/.

Brunch out on Mother’s Day? Here are 5 ideas around Sacramento - This is how much we love Mom. Some 80 million adults partake in a restaurant meal for Mother’s Day, according to the National Restaurant Association, making it the busiest day of the year for eating establishments...The good news is we’ve helped simplify the work by considering Mom’s personality and the kind of food that she would prefer. Keep in mind that now is the time to make a reservation, as Mother’s Day brunch tends to book up quickly. Featuring Grange, Crawdad's, New Canton, The Waffle Experience and Florez Bar & Grill. Chris Macias in the Sac Bee.

Sacto Chicken Co. Shuts Down - The Sacramento Chicken Company, which took over the iconic, orange Merlino’s Freeze building on Stockton Blvd two years ago, has served its last chicken wing. They closed down in March. Greg Brown on SacramentoLand.

Chocolate replacing cupcakes at Roseville Galleria - A Berkeley-based chocolate maker that's expanding its retail based presence will soon have a location in the Westfield Galleria at Roseville. Tcho Chocolate will fill a kiosk previously occupied by Esther's Cupcakes, according to Heather Haskell, the company's e-commerce and retail manager. The cupcake store, which came from the owner of Estelle's Patisserie, closed last year. Sonya Sorich in Sac Biz Journal.

Soon you won't be able to smoke on a popular midtown patio - Meals on the patio of Old Soul at the Weatherstone will no longer be served with a side of cigarette smoke. As of May 1, the outdoor dining area of the business at 812 21st St. is going smoke-free. Sonya Sorich in Sac Biz Journal.

VIDEO: Countdown to SactoMoFo 8 with BaconMania - Just a few more days until 35 of Sacramento’s most popular food trucks join together to serve hungry Sacramentans. The 8th annual SactoMoFo Festival is April 25. Bacon Mania cruised by FOX40 to share its big pig, pulled pork sandwich it’ll be sharing at the event. Paul Robins on FOX 40.