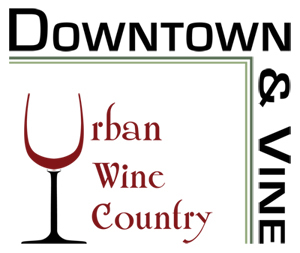 It all started as a chance meeting at an industry mixer.

Kate Chomko, owner of Downtown and Vine, and Jennifer Kaye of About a Bite met, got to know each other, and now are cooperating on a new space on K Street.

For Downtown and Vine, a hidden favorite for those who work around the State Capitol, it means expanding its kitchen, Chomko told Cowtown Eats last week.

For About a Bite, it means moving the business from Gold River, sharing a kitchen with Downtown and Vine, and opening a storefront.

First, more on Downtown and Vine. Their current menu, which I often enjoy with co-workers, is limited by the fact that they don't have a kitchen with a vent hood. That means they can't cook meats and instead have to serve sliced bread and cheeses, flatbread, chips and dip, etc. which don't require a stove.

Come June 1, their menu will expand where they san serve a lot more small plates, featuring meats, sausages, peppers, etc. They'll also be adding soups, salads and a juice bar to their offerings. Chomko says they'll grow their own microgreens and wheat grass.

Downtown and Vine's new menu will be farm-to-fork, where what they cook will be based on what's dropped off from the local farms and what's in season that week. As part of that, they'll return their compost back to the farm.

For those who haven't been to Downtown and Vine recently, when they opened, they were a multi-winery tasting room, which only permitted them to serve wines for places which they served as a tasting room. They now have an expanded liquor license so they can now serve wine and beer, regardless of what winery it came from.

The two restaurants will also share a new event space.

As for About a Bite, loyal Cowtown Eats readers learned recently that the bakery was opening an outpost on K Street. In a late April interview with Cowtown Eats, Kaye says that they're actually relocating their entire business.

Unlike their current location, About a Bite on K Street will also be a retail store where they will have a display case a la Ginger Elizabeth. The current location is just an industrial bakery and a spot to pick up pre-ordered desserts.

One of the reasons Kaye decided to move Downtown is to be closer to their clientele. They do a lot of corporate gift business, and they hope their increased visibility will help build the 3 year old business.

In addition to desserts, About A Bite will be offering gelato from Devine Gelateria.

About a Bite faces sharp competition for diners craving sweets on a street featuring Estelle's Patisserie, Vampire Penguin and Ambrosia.

Empress Tavern team dishes out Filipino, Hawaiian fare at pop-up - Thiemann’s wildly successful restaurant Mother is enough to build a rapid fanbase for Empress, his upcoming meat-centric concept located below the Crest Theatre. It’s expected to revolve around a rotisserie-spun meats, with craft cocktails and a formidable beer list. American food. So what are the dudes doing serving spam loco moco and lumpia? Fun, I guess. And to build a little buzz, sure. And maybe to prove the vegetarian restaurant owners can, in fact, cook meat. Janelle Bitker in Sac News & Review.

Big Italian food, sports bar to fill Little Prague - Little Prague Bohemian Restaurant has been closed since July, so when I saw a group of people chatting Thursday inside that courtyard, I stopped. I ended up meeting the guys who just signed a new lease. Jason Ojeda and John Russell are from the Vacaville area. They are among several partners in what they describe as a New York-style Italian restaurant and sports bar, serving pizza by the pie or slice, as well as calzones, strombolis, pasta and seafood. (Strombolis are similar to calzones, just rolled instead of folded in half.) Wendy Weitzel in Davis Enterprise.

VIDEO: Tower Cafe Celebrates 25 Years - Tower Cafe is a landmark in Sacramento. Known for its history, diverse and delicious menu and loyal patrons. The restaurant opened its doors on Earth Day 25 years ago – April 22, 1990.  Gary Gelfand took a stroll down memory lane and celebrated the special occasion with staff and regulars. On FOX 40.