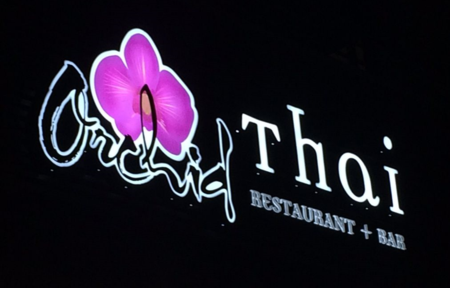 Days after the opening of Insight Coffee Roasters' Fremont Cafe, Orchid Thai is now soft open at the new complex at 16th & P.

Orchid Thai plans to have their grand opening on Sunday, May 24. According to their Facebook page, they've been open to the public since Wednesday, May 13.

When I walked by Sunday evening and poked my head in, it looked like the restaurant construction was complete and the establishment was fully functional, with a large bar featuring 10 beers on tap.

One of the diners, who had recently moved into the neighborhood, raved about the cuisine and said it compared favorably to Thai Canteen, located just a block away. (She did note that Thai Canteen is fast casual and Orchid Thai is more of a sit down establishment, so it may be an unfair comparison.)

I stopped by after dinner, so I wasn't able to give the place a try, but I hope to this weekend.

Orchid Thai describes itself on its Facebook Page as "Downtown's newest Thai restaurant that not only serves delicious traditional Thai cuisine but also some of the most creative craft cocktails."

This is the second Orchid Thai location, with the first being in Lincoln.

The Downtown Orchid Thai is located at 1609 16th St., and can be found online at http://www.orchidthai916.com.

Drug, alcohol abuse common in restaurant industry - But the recent survey takes on local significance with John Puckett. He’s worked in Sacramento-area restaurants since the age of 12 and came to a point where he had to face his substance abuse issues. Puckett’s now 49, a cook at Oak Park Brewery, says he’s nearly 14 years sober. Chris Macias in the Sac Bee.

Monk’s Cellar: Almost a monk's dream - So it comes down to this: Quality beer (the brewmasters have experience at Sacramento Brewing Co., Lodi Beer Co. and Sacramento Brewing Services) and a dark and beautiful ambiance (lots of brick and wood) are the best reason to visit Monk’s Cellar. Four stars for the brew and ambiance, three for the food. Jonathan Mendick in Sac News & Review.

Coffee: House of Worship - With a high-minded approach to sourcing, roasting and brewing, Temple Coffee attracts a loyal flock of followers. Marybeth Bizjak in Sac Mag.