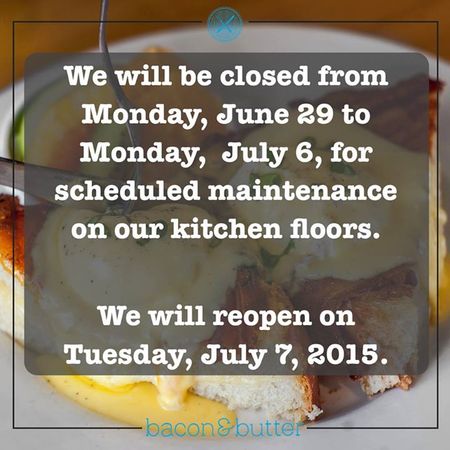 Those who were planning to spend the upcoming holiday weekend standing in a lengthy line for Bacon & Butter will have to find new plans.

Bacon & Butter announced last week that they'll be closed through Tuesday, July 7 for scheduled maintenance on their kitchen floors.

The restaurant, helmed by chef & owner Billy Zoelin, opened at its current spot in Sept. 2014 after a lengthy renovation of a building that used to be a Chinese restaurant.

Coincidentally, Magpie Cafe is also closed through July 6, as part of a planned move from their home of 5 years on R street to their new location at 16th & P.

The existing space will become Magpie's Nido Bakery Cafe, and will be open over the next month.

Magpie's new location is in a more modern building with more space, a newer kitchen, a bar and a large patio in the shade.

A fuzzy fizz: Cudera Napa Valley (2014), Ruhstaller - The line between wine and beer tastes fuzzy. Not literally fuzzy, of course, but Cudera is the product of grape must and wort co-fermented with both wine and beer yeast. Janelle Bitker in Sac News & Review.

Dining in the dark - Remember that scene in Wall-E, where the futuristic humans are strapped into hovering recliners whilst watching TV and gorging on food? Well, there’s a movie theater in Rocklin that feels a like a step toward that type of sedentary civilization. Studio Movie Grill (5140 Commons Drive in Rocklin) provides food service in the middle of watching a movie, the seats are huge and recliner-like, and all you need to do is press a button on your chair to order another margarita. My wife and I heard about it a few months ago and finally made the trek out east to investigate this new dystopia. Jonathan Mendick in Sac News & Review.

VIDEO: Dishin With Tina: South - Tina is checking out a restaurant this week that Cody and his southern roots would approve of. On Good Day Sac.