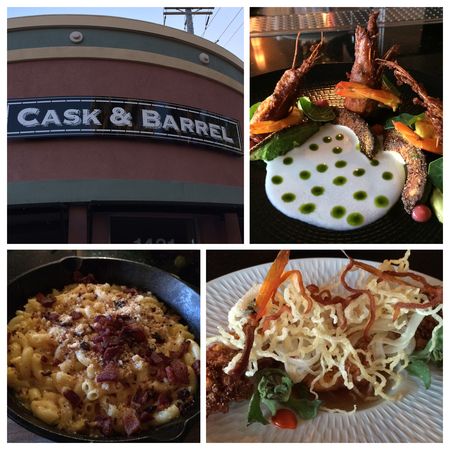 Cask & Barrel (disclosure: they're a valued advertiser) has been doing amazing things over on Del Paso Blvd.

I was there several weeks ago and Chef Gabriel Glasier described how his recipes aren't measured in ounces or minutes, but rather are so precise that grams and seconds are used.

When developing his Hangtown Fry recipe, he says he ended up eating 50 eggs that weren't quite what he wanted before he nailed the recipe.

So it's no surprise that others are also noticing what's going on at Cask and Barrel.

Here's a snippet of Carla Meyer's review in the Sac Bee:

Its dishes do not seem transitory. They wedge themselves into memory. You will think often of the meats’ tenderness, of the appetizers’ visual allure and of the local, seasonal ingredients Glasier uses. You will think of these things because nearly every restaurant you visit after this one will seem expensive by comparison...

Even if Cask & Barrel grows busier, Glasier said he will not change his 40-seat model. Here’s hoping that’s true. For me, Cask & Barrel has ruined that other restaurant model – the one charging a lot for quality ingredients and pretty presentation. It needs to stay as is.

Organizers cancel – then un-cancel – Davis Beer Week - We’re doing a lot of writing – and rewriting – here in the newsroom this afternoon, fresh off the news that organizers opted to cancel Davis Beer Week, then, in a matter of a few hours, reverse course and say the event is back on. Blair Anthony Robertson in the Sac Bee.

Food truck owner’s dog fatally shot in Sacramento home burglary - The owner of Drewski’s Food Truck is offering a $5,000 reward for information leading to the arrest and conviction of the person who shot and killed his dog and business mascot during a burglary of his home Saturday night. Cathy Locke in the Sac Bee.

Downtown Plaza's west end empties out. Now what? - In the food court, Gyro Supreme's last day of business is Tuesday and a sign at Panda Express says it's open through July 3. Sonya Sorich in Sac Biz Journal.

Don't Miss The Dish: Zabuton - Zabuton. When I saw a dish by that name on Grange’s menu recently, I almost passed it by, figuring it for some sort of fish. But when the server came to take our order, my curiosity got the better of me, and I asked about it. Turns out it’s beef—and absolutely delicious. Marybeth Bizjak in Sac Mag.

Should state allow beer tasting at farmers markets? Governor will decide - In an action that could bring swift resolution to this pressing first-world problem, Gov. Jerry Brown is poised to decide whether you can sample beer at the farmers market. Legislation pending before the governor would permit breweries to offer beer tastings at farmers markets that are located in a nearby county. Allen Young in Sac Biz Journal.

VIDEO: Dishin’ With Tina: Boucanes Smokehouse - Tina went to a BBQ restaurant in Folsom where they’re not telling you about their secret sauce! On Good Day Sac.