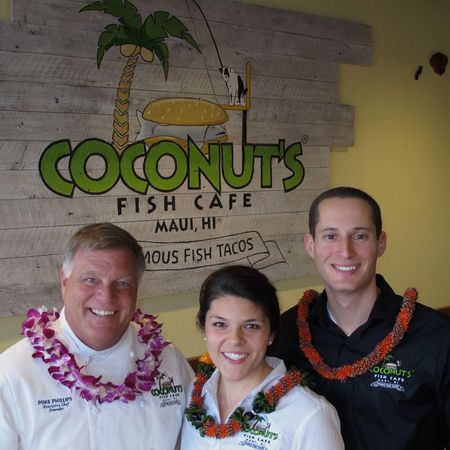 Coconut's serves items such as salads, fish tacos and entrees that combine fish and brown rice. "This is all about eating healthy with profiles and flavors that really explode," Phillips said. He prides himself on a "California cuisine take on Hawaiian culture food." The casual restaurants cover about 3,000 square feet and have an island theme.

Coconut's currently has four locations: two in Texas, and one each in Hawaii and Arizona. Phillips said he's sold 11 franchise locations, with more on the way.

The owners hope to open a location by the end of the year.

Disclosure: My wife used to work with a member of the family who owns and runs the growing chain.

News on MARRS - Over at the neighboring Block Butcher Bar, you can expect a slightly revamped menu coming soon....Now, A llyson Harvie is the culinary director of Block and LowBrau, and she’ll be adding a few new dishes on top of two desserts she started serving a few weeks ago. Harvie has held posts at formidable San Francisco restaurants, such as Citizen Cake, Ragazza and Absinthe. Janelle Bitker in Sac News & Review.

Garden to Grill: Step up your meatless game - While the savories are hit or miss, the baked goods are really pretty good. Enormous “Creamies” feature two large cookies sandwiching a vegan “cream” filling. The chocolate-mint version is a satisfying pairing. A creamsicle-flavored cupcake one day had vanilla filling and a light orange-flavored frosting. One benefit of gluten-free baking is that sweets are usually quite tender. Ann Martin Rolke in Sac News & Review.

Starbucks says it won't close Downtown Plaza store, for now - Despite the many business closures in the works, it appears Sacramento's Downtown Plaza will continue to offer a caffeine fix, at least for the time being. Sonya Sorich in Sac Biz Journal.

Get ready for more sweets as two bakeries expand - Reports of the sweet tooth's demise might be widely exaggerated. Two locally owned bakeries, About a Bite Bakery and Mrs. Kay's Sweet Treats, are expanding with new locations. Sonya Sorich in Sac Biz Journal.

VIDEO: Johnny Rockets Whips Up Burgers and Floats - Paul gets the scoop on Johnny Rockets’ special root beer floats and learns how they grill up their pastrami burger. On FOX 40.

VIDEO: Breadstick Sandwich - Olive Garden is making sandwiches out of their famous breadsticks, so we sent Cambi Brown out to investigate. On Good Day Sac.