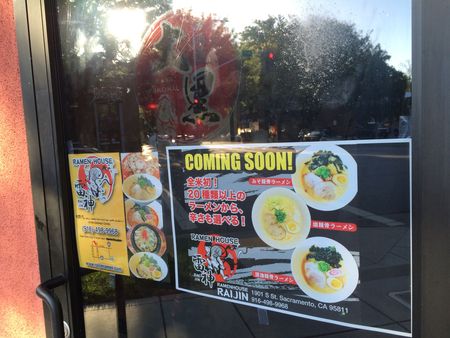 Izakaya Daikoku has closed and will become Ramen House Raijin, according to a sign posted on their door Saturday afternoon.

(H/T to Chris Macias, who first posted on Twitter that something was up with the restaurant.)

Ramen House Raijin should not be confused with nearby Ramen House Ryujin in the Safeway Parking lot, by the same owner. 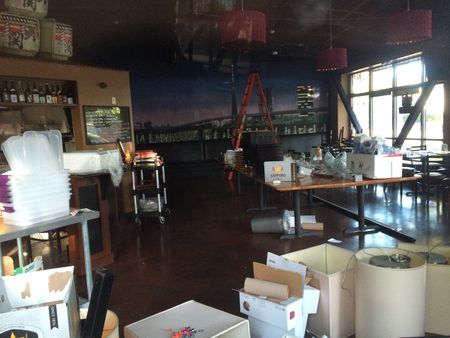 Izakaya Daikoku originally opened on Oct. 1, 2014, and I loved it because for its okonomiyakai, a sort of Japanese fried pancake. Unfortunately, subsequent visits showed that my enthusiasm for the place wasn't widely shared by the general restaurant-going public.

The Sac Bee's Ed Fletcher has a little more on the closing:

Restaurateur Sai Wong...said the new place is “going to be a different style (of ramen). More spicy. More fire...”

Wong said the restaurant, in a space formerly occupied by Sweetwater Restaurant and Bar, was doing well, but the business model wasn’t for him. He said he worried about people overconsuming sake.

While we're talking about restaurants by Wong, he sold Akebono last month, according to their liquor license (which records ownership transfers). The new owners are Han Young Lee.

The woman who picked up the phone on Sunday afternoon at Akebono says the restaurant will remain the same under the new ownership.

Ramen House Raijin will be located at 1901 S Street.

Dos Coyotes Opening Date - Dos Coyotes Border Cafe on R Street finally has an opening date. A sign outside the building says it will hold its grand opening on June 16. It's one of the businesses that fills a renovated building at 15th and R streets. Sonya Sorich in Sac Biz Journal.

Paragary's Restaurant Preview - Walking into the newly rebuilt Paragary’s Restaurant, it is undoubtedly recognizable as the masterpiece of Sacramento restaurateur, Randy Paragary. The strikingly contrasted exterior dons the name in bronze, proudly proclaiming ‘Est. 1983 Midtown Sacramento’. Approaching the bar you feel compelled to order that expensive scotch your hipster friend told you about, just in case Don Draper himself happens to turn up in the next seat. And you can let out a sigh of relief when your plates hit the table and you realize that this spot is exactly everything it’s been cracked up to be. Tyler Stacy on The City Scouts.

VIDEO: Sacramento’s Shady Lady Nominated for National Award - As a bartender drops a thick strip of orange peel in the Shady Lady’s ‘Jameson and the Giant Peach’ drink, he’s giving customers a taste of what made the place a spirited stand-out in the 9th Annual national Spirited Awards. More than 2,000 nominees poured in for the 16 categories featured in this major industry competition...The final four nominees for each category will be announced June 16. Sonseeahray Tonsall on FOX 40.

AUDIO: Cowtown Eats Explores Sacramento Food Scene - You can check Yelp for restaurant reviews but if you really want to dive into Sacramento’s food scene you may want to visit Cowtown Eats. It’s a food blog run by food-lover Darrel Ng (in his spare time) and it features an assortment of information about Sacramento’s dining scene. Ng started the blog in 2009 as a compilation of happy hour specials in the downtown grid. Now, the blog dips into social media exchanges between area chefs and features reviews by restaurant critics and Ng himself. Ng sat down in the Insight studio earlier this month to talk about Cowtown Eats and what he sees in the future for Sacramento’s’ restaurant scene. Rick Kushman on Capitol Public Radio.