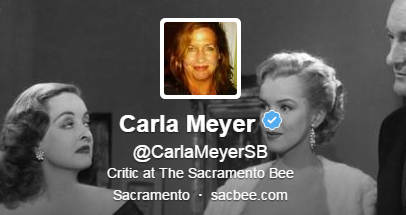 Carla Meyer, who published her first review over the weekend after she took over for Blair Anthony Robertson as the Sac Bee's restaurant critic, graciously agreed to do an e-mail Q and A to introduce herself to Cowtown Eats readers.

1. Before we get into your new job, can you tell us a little about your journalism career?

I have been a writer and/or editor at The Bakersfield Californian, San Francisco Chronicle and The Bee. I worked in news and sports but have spent most of my career in features departments. I became a movie critic in 2000, and I have been primarily that since, though I also covered pop music and a smidge of comedy and theater for The Bee.

2. Did you start your post college life in journalism, or did you have other careers along the way?

I was still in college when I got my first job, at The Bakersfield Californian, and it has been all journalism since.

3. Why did you move to Sacramento?

To be the movie critic at The Bee.

4. Have you ever worked in a restaurant before, and where was it, what did you do and for how long?

All my jobs before my first newspaper job were in agriculture or food service (I am from Shafter, a farm town near Bakersfield).

I worked in a Mexican restaurant from ages 16-18. It was a mom-and-pop operation, and I waited tables, did some cooking and a lot of prep work (I lost a small piece of my thumb in a lettuce-chopping incident).

The restaurant's owner was a great cook -- my mom still says his beef burrito, made with chili Colorado, was the best she's ever had -- and he taught me a lot about flavors and ingredients. He and his wife always struggled to keep the place open, and they finally closed it down just before I graduated from high school.

That summer, I worked at a fast-food restaurant along I-5, mostly taking orders at the counter. This experience taught me how to be part of an efficient, high-volume operation. During college, I worked at a dorm cafeteria, mostly on the serving line or in the big, industrial dish-washing room. That cafeteria was clean as a whistle -- the standards were exacting. It taught me a lot about food safety.

I later worked at two other fast-food restaurants. My last food-service job, before I was hired at the Bakersfield Californian when I was 21, was as a pizza-delivery person. I mostly delivered, because I wanted the tips, but I occasionally stayed in the restaurant and made pizzas.

5. As you start your tenure as the Bee's dining critic, what is your goal/mission?

My goal is to help guide readers through the local dining scene. As a critic, I always write with the consumer in mind, whether I am writing about movies or restaurants. But I also take into consideration a chef or restaurant owner's intention and whether she or he has achieved that goal. I will judge every restaurant on that individual basis. So it won't be a scale where only fine-dining places can reach four stars. I did the same with movies. I gave four stars to very few movies in the past few years, but one was "Mad Max: Fury Road."

6. What have you seen recently at a restaurant that delights you?

Really good, innovative food for a shockingly low price. I would say more, but it might reveal the place, and I've only made one visit so far out of three. Even though I am not an anonymous critic, I still want to be low-key about my restaurant visits, and not tip anyone off that I'm coming.

7. What are your pet peeves about restaurants?

Poor service. I don't count overtaxed or overwhelmed as "poor." I understand places get busy, and co-workers call in sick unexpectedly, and restaurants suddenly become short-staffed. If I can tell a person is trying, I am sympathetic, because I worked in food service. But if a server or a counter person just looks bored or uninterested, it drives me bananas. Your job is to serve the customer. Why else are you there?

Thanks again to Carla for agreeing to do the interview. You can find her on Twitter @CarlaMeyerSB.

If you missed her first review, she wrote about South, the recently-opened Southern restaurant in Southside Park.

Its fried chicken, offering a muted crunch and intriguing hints of citrus throughout, is exceptional. But it’s not the best thing on the menu, and on one of my visits, it arrived lukewarm alongside other, piping-hot items, suggesting the chicken had been sitting awhile.

I've only eaten at South on their very first night open, but I've been hearing buzz from friends that they're worth another trip. After reading Carla's review, I'll make sure to order the burger and Hush Puppies.

South is located at 2005 11th St., and can be found online at http://www.weheartfriedchicken.com.

Meet The Bee’s new restaurant critic - Meyer’s photo will appear with her reviews. She won’t be anonymous like previous Bee food critics, who labored to keep their identity a secret so they would receive the same treatment as average diners. Why have we decided to make this change?...By jettisoning this practice, Meyer will be able to interact more closely with Sacramento’s food and dining community. Tim Swanson in the Sac Bee.

New Shoki Ramen House set to open within two weeks - The building has a fresh coat of exterior paint. The new signage is in place. The inside has been scrubbed, and scrubbed some more. Shoki Ramen House, pending a few last-minute logistical details, is poised to open within two weeks, according to its owners, taking over the old Trails Restaurant building on 21st Street near Broadway. Blair Anthony Robertson in the Sac Bee.

French restaurant now open in former Broiler location - A sign nearby still directs people to The Broiler, but Brasserie Capitale is officially open on the bottom floor of 1201 K St. in downtown Sacramento. Sonya Sorich in Sac Biz Journal.

VIDEO: Taste of Summer Preview - Local Sacramento restaurants are coming together to offer a "Taste of Summer" the 1st weekend of June. Featuring Jason Poole from Dawson's Steakhouse. On News 10.

VIDEO: New Restaurants, Updated Lounging Area Coming To Terminal A At SMF - Terminal A at Sacramento International Airport is getting a facelift. On CBS 13.