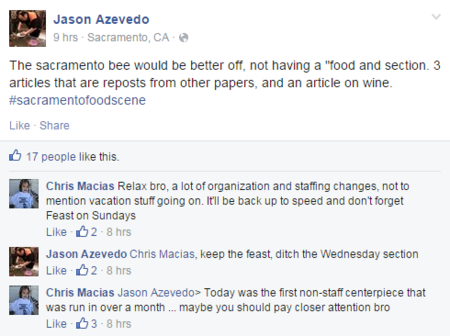 Jason Azevedo, the executive sous chef at Esquire Grill and formerly at Mighty Tavern, started out with the observation that there wasn't much local news in this week's Food and Wine section of the Sac Bee.

That set off a lengthy Facebook discussion with (among others):

In the end, Chef Pechal probably summed it up best in his comment.

I think it's great when chefs and media can have open dialog about this stuff. It's healthy and it's good for everyone. Keep up the good work gang!

Shady Lady nominated for national bar award - With a reaction similar to shooting overproof whiskey, the Shady Lady team was knocked back and happy to hear news that their bar is up for one of the cocktail industry’s largest awards. On Monday, the R Street establishment received word it had been nominated for “Best American High Volume Cocktail Bar” in the 2015 Spirited Awards. Chris Macias in the Sac Bee.

Six ways to get your sugar fix - D'oh! National Doughnut Day rolled around again on Friday, June 5. In case you're unprepared, we’ve baked up a list of six sweet spots around town where you can celebrate this hole-y holiday. Featuring Baker's Donuts, Danny's Mini Donuts, Marie's Donuts and The Parlor. Jason Pham in Sactown Mag.

12 ideas for Father’s Day feasting - Mother’s Day may be a time for Sunday brunches at fancy restaurants and mimosas, but Father’s Day tends to be a time for dressing down, grabbing a beer and a pizza, or forking cold chili from the pot while leaning over the kitchen sink. In that spirit, we offer places Dad might enjoy if he’s got a hunger goin’ and prefers homey over haute. Note: It’s always wise to call first for days and hours. We’ve alphabetized this recommended list. Featuring Broderick Roadhouse, Field House, Limelight, 36 Handles and T&R Taste of Texas. Allen Pierleoni in the Sac Bee.

VIDEO: Gummies & Wine? Oh Yeah! - Ever wondered what flavor of wine would go best with your favorite candy? Bethany Crouch stopped by Andy’s Candy Apothecary where owner Andy Paul and wine expert Rick Kushman show her how to pair her favorites. On FOX 40.

VIDEO: Donate food for the needy at Reserve Food Truck - The Reverse Food Truck will be out at the Farmer’s Market on Capitol Mall collecting food for local food pantries. Mike Teselle on KCRA.