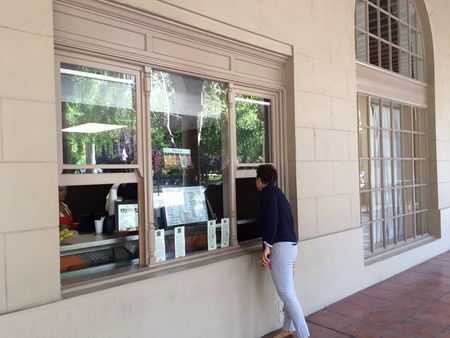 The Buzz Coffee Brewery, which relocated from 500 Capitol Mall to the Senator Hotel at 12th & L, opened on Monday.

The cafe operates out of a small space in the front of the office building formerly occupied by a Bank of America ATM.

Bryan Martin, the owner of The Buzz, told Cowtown Eats in a quick interview on Monday that he opened a coffee cart at 500 Capitol Mall, knowing that Specialtys Cafe would eventually move in and displace him. He then looked for and found this new location. 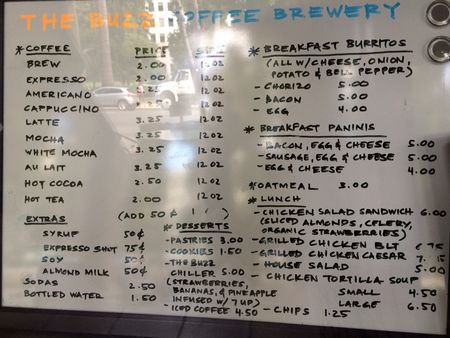 In addition to coffee, the cafe serves breakfast burritos (Martin recommends the chorizo breakfast burrito), soup and salads at lunch and desserts by Vesela Peneva. Vesela's desserts are also served at Stick Gator, where she has gotten rave reviews. 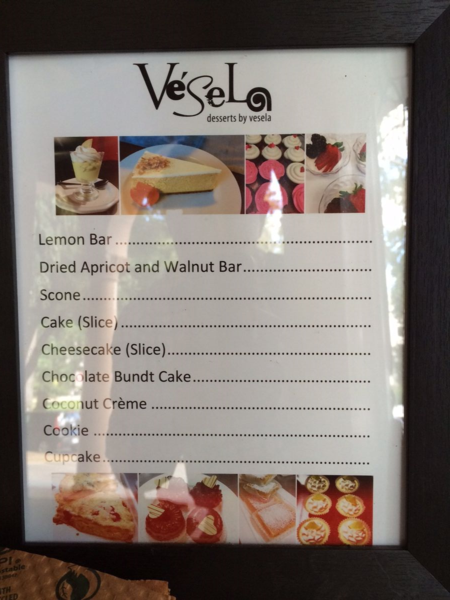 Reviewers on Yelp seem to like the lunch offerings. "Brian makes the BEST tortilla soup EVER. Hands down. I could never stand tortilla soup until he offered me a sample of the tortilla soup and now I can't live without out it!!   He also makes killer panini sandwiches. Always adding something new and yummy to the menu," wrote Kita E. on Yelp.

Martin also said that he's considering getting a beer and wine license for the evening crowd to enjoy a drink on what might be Sacramento's best view of the State Capitol.

In recent weeks, the Senator Hotel has been bought by new owners. This move was in the works prior to the ownership change.

According to the Sac Biz Journal's Ben van der Meer, the building's new owners are considering a ground floor restaurant.

Miles said the plan is to keep the building in office use, as it has been for the last 30 years. Among the upgrades being planned are some exterior renovations and the addition of a first-floor restaurant with outdoor space, a fitness center and some conference rooms, he said.

Cowtown Eats confirmed Monday that the planned restaurant would be in addition to The Buzz Coffee. (Update 6/3/2015: Martin told me on Tuesday that according to building management, the new ground floor restaurant is at least 3 years out.)

(Disclosure: I work in that building, and I'm excited for all the new food choices.)

The Buzz Coffee Brewery can be found at 1121 L Street.

What's going on with the former Monte Carlo Club? - The blank exterior space might suggest otherwise, but plans are still underway to reinvent the former Monte Carlo Club. The nightlife venue's new incarnation -- called B-Side -- likely will open in late June, according to Garrett Van Vleck of the local Shady Lady Saloon, who is one of the new managers. Sonya Sorich in Sac Biz Journal.

Wicked ’Wich: Carbo loading - Hot breakfast items include a breakfast panini with frittata, cheese and a spicy Fresno chili aioli. Or, you can start the day with a sugar jolt via the Nutella-and-banana panini with cinnamon sugar. Steel-cut oats in two sizes are also offered, with seasonal fruit and brown sugar. Actually, the panini are the cafe’s best items. They’re much smaller than the food truck monsters, but deliciously crispy and warm. Ann Martin Rolke in Sac News & Review.

Beer Run: 10 brews worth drinking - It’s Memorial Day weekend, with the summer swelter just around the corner. Maybe you’re looking for a new beer or two to try. So let’s take a look at the ones I’ve most enjoyed so far in 2015. Many of them are available at local bars and restaurants, though when and where can be a moving target. Some you can find at bottle shops and quality grocers. A few are hard to come by but are so good you might want to put them on your wish list. Featuring Bike Dog Brewing, Knee Deep Brewing, Mraz Brewing, New Helvetia Brewing, Oak Park Brewing, Track 7 Brewing and Device Brewing. Blair Anthony Robertson in the Sac Bee.

We’ve waited for it for long enough… patio dining season is finally upon us! - It’s that time of year! The weather is getting warmer and many restaurants are beginning to re-open their outdoor seating areas. What better way to take your culinary experience to the next level than a beautiful outdoor ambience? Here at Sac Foodies, it’s patio dining week! We’ve assembled a few of our favorite Sacramento-area restaurants for outdoor eating and will be featuring them in a series of posts this week. Today’s featured patio places include Ten22, Mulvaney's B&L, Selland's East Sac. On Sac Foodies.

VIDEO: Starbucks mulls selling beer, wine at NorCal stores - A plan is brewing for Starbucks to launch an evening menu of beer and wine to a number of Northern California locations. Linda Mumma on KCRA.

VIDEO: Robbery Leaves Midtown Business in a Pickle - At Preservation and Co. in midtown Sacramento, their pickles were pilfered, along with business equipment. All together, a thief or thieves made-off with about $8,000 worth of goods. “Yeah. They hit the pocketbook pretty hard, which is rough,” Gomez said. That money was going to buy a label maker, for the fledgling company’s artisan gherkins. Ben Deci on FOX 40.