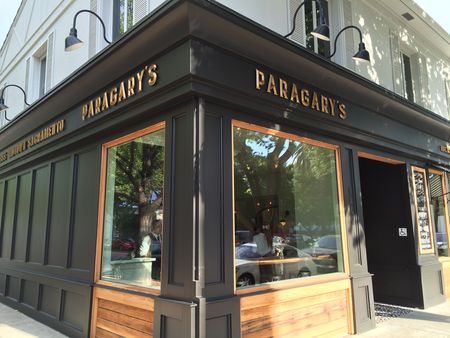 Thousands of words have been written about Randy Paragary over the last few weeks with the debut of his namesake restaurant Paragary's Midtown. But none is as good, revealing or complete as this article recently posted by Sactown Mag.

Here's a tidbit from Patrick Mulvaney:

And the learning didn’t stop when they left. Patrick Mulvaney says that he turned to Paragary frequently when he first started his own celebrated establishment Mulvaney’s B&L. “The first couple of years I would call and say, ‘Hey, I need help.’ The phone call was always returned promptly and he’d say, ‘Here’s the answer’ or ‘This is a big one—come down to Esquire and you buy the wine and I’ll buy dinner.’ ” That, he adds, is how Paragary deals with all his workers when they move on.

“He does have a kindness that not everyone is aware of,” says Spataro. “Usually, you see it when individuals ask for help. They might be employees, they might be friends, whatever. He can be kind and generous in that way. A lot of people don’t see that because he doesn’t make a big deal about it.”

That mentoring and largesse has pushed him to be called the godfather of Sacramento’s ever-growing restaurant culture enough times to make the moniker stick.

If you want to know why the dining scene is the way it is in Sac, read the entire story by Anita Chabria.

They also have a great infographic of the Paragary "coaching tree" and how he's touched so many restaurants in Sacramento.

Booze coming to another theater - Alcohol might be coming to the movie theater at Folsom's Palladio at Broadstone. The theater, Palladio 16 Cinemas, has applied for a license to sell beer and wine, according to the California Department of Alcoholic Beverage Control. Sonya Sorich in Sac Biz Journal.

Potted plant desserts are a thing you can now buy in Sacramento - It may look like a shovel plunging through a potful of dirt—disturbing whatever green thing is trying to grow—but it’s actually tiramisu. With a shovel-looking spoon. Yeah. Janelle Bitker in Sac News & Review.

The Firehouse Restaurant - Life just got a little sweeter at The Firehouse Restaurant, which unveiled three new desserts on June 5 created by pastry chef Kam Golightly, who joined the Old Sacramento establishment in April and whose résumé includes stints at Oakland’s Oliveto Restaurant & Cafe and Yountville’s Redd (which Esquire magazine listed as one of the best new restaurants in the country in 2006). Tori Masucci Cummins & Jessica Rine in Sactown Mag. (Fourth Item.)

Beer Run: Expansion on tap for Sac Brew Bike - I was one of those who wondered if this venture, owned by the husband-and-wife team of Chris and Sarah Ferren-Cirino, would be around a year after launch. Leave it to Beer Run to wonder if a real-life beer-run business would actually pan out. Here’s your answer. There is no longer one 15-passenger bike. There are three, each costing $50,000 or more. And those bikes are often booked six weeks out for weekend and prime-time tours. Chris and Sarah, who left jobs in the insurance industry to take a chance on this, have hired a manager and seven part-time employees to make Sac Brew Bike run smoothly. They recently added a Reno Beer Bike recently as well. Blair Anthony Robertson in the Sac Bee.

VIDEO: Coffee Shop Offers A Place To Do Business - Gary checks out new coffee shop, The Trade. The Trade allows coffee lovers a ton of space to essentially run a business and drink good coffee. Customers can rent out space by the hour or even monthly, providing a space for those with businesses but no actual building to run it out of. Gary Gelfand on FOX 40.

VIDEO: Dishin’ With Tina: Valley Cafe - Tina is visiting a cafe in Fairfield where customers love the homemade cuisine. On Good Day Sac.