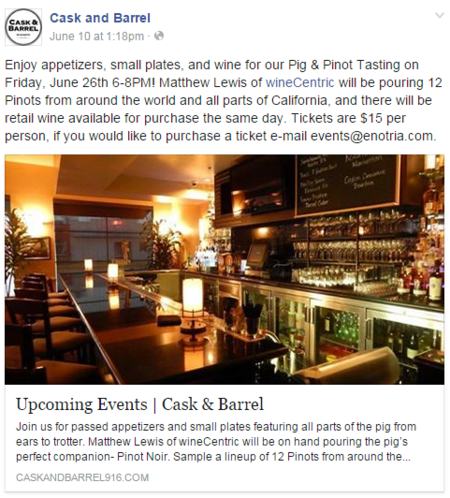 If you haven't been to Cask & Barrel recently, you're missing out.

(Disclosure, they're an advertiser, but I really do love them. This is not a paid post.)

Executive Chef Gabriel Glasier, Pastry Chef Kristel Flores and the rest of the team are turning out some of the most inventive and creative food in Sacramento. And that's before you even get to their BBQ, which is smoked for 7 hours and then cook sous vide for another 48 or 72 hours (depending on the meat).

But here's your chance to sample the restaurant without too much of a commitment.

On Friday, June 26, Cask & Barrel will have a Pigs & Pinot event, where the chef will roast a 60 pound Berkshire pig from the Heritage Group in a Caja China Box. (I didn't know what one was either. Basically, it's an aluminum box with coals on top. The pig will cook in approximately 5 hours. One way to visualize it is a way to do a Hawaiian pig roast, but above ground. Here's more info.) In addition, the chef told me recently he will likely season it Filipino style. He'll also go whole hog and serve trotters, ears and other parts of the pig as treats at the event.

With that delicious pork will be wine tasting with 12 pinots from California and around the world, curated by Matthew Lewis of WineCentric. The first wine on the list? A premiere cru from Beaune-France. That bottle itself costs $60.

The event is only $15. To get tickets or for more info, visit CaskandBarrel916.com.

Paragary's reveals 'drastic' remodel - A simple goal dominates a remodeled Paragary's restaurant: Don't be boring. "It just didn't keep up with the competition. It became boring. We don't want to be boring anymore," local restaurateur Randy Paragary said of his flagship restaurant at the corner of 28th and N streets in midtown Sacramento. Sonya Sorich in Sac Biz Journal.

About a Bite Bakery - This local bakery, which specializes in mini confections, plans to open its first storefront on K Street at the end of June, replacing the former Blush Ultra Lounge nightclub next to Tequila Museo Mayahuel. Tori Masucci Cummins & Jessica Rine in Sactown Mag. (First Item.)

VIDEO: ‘Off The Hook’ Cooking - Tanya Hill and Andre Perry of Off The Hook restaurant on Del Paso Blvd. make some delicious soul food/Asian fusion! Paul Robins on FOX 40.