Can anyone help me understand this?We had a terrific brunch at the new Magpie Cafe this morning, but when the bill...

It's been a big month for Magpie. At the beginning of the month, they moved from their original R Street location to a new building at 16th & P.

Magpie instituted a new tipping system, the first restaurant in Northern California to institute this back of the house reward. I had a conversation with Magpie owner Ed Roehr on Sunday morning at Nido, and he helped provide the information for some of the answers below.

A: In addition to the traditional system where a receipt lists the food and drink total and adds a line for a server gratuity, Magpie has added a line for a kitchen tip. The rationale is that while the front of the house staff has much to do with how satisfied with how a diner is, the kitchen staff/back of the house and the food they prepare also plays a role.

Q: Why don't restaurants just collect the tip and split it among the servers and kitchen staff?

A: In California, that's illegal. According to the California Restaurant Association's Web site, tips can only be pooled and distributed to those in the chain of service, not to the kitchen staff in the back of the house. Wait staff may voluntairly share their tips with the back of the house, but servers are still responsible for paying tax on that money before it gets gifted. If you're really interested in the nitty gritty of the topic, read this Nolo.com article on tipping.

Q: Why not just charge more for food and eliminate tipping?

A: One of the biggest problems with this is that the restaurant owner isn't required to pay his or her employees more. Diners may be paying 20% more for your food, you may not be leaving a tip at the end of the meal, but the restaurant staff isn't guaranteed a penny more in base wages than what they would make at a restaurant down the street.

Q: Where did Magpie get this idea from?

A: Alimento, a "creative and soulful Italian restaurant" in the Silver Lake neighborhood of Los Angeles, which implemented the kitchen tip in Dec. 2014. Read more at Eater.com.

Q: Will I see this in other restaurants?

Q: So how much should I tip on each line?

A: Tipping is always voluntary. However, Magpie suggests that you add a buck or two to your bill to reward the kitchen staff. Here's a note they include with each bill: 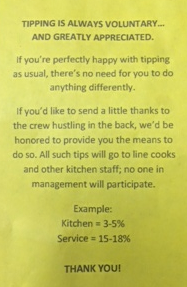 Q: How is it working out thus far?

A: It's only been in effect for several weeks and the response has been all over the map. Some people aren't taking advantage of the opportunity to leave the kitchen a tip, some are tipping the same amount but redistributing it between the two lines, and there are some very generous people who are leaving the server tip the same and leaving a hefty kitchen tip too. It's too soon to draw conclusions from their data.

Q: How did the servers take it?

A: At first, there was a lot of apprehension, but after Magpie owners fully explained the concept, they say servers have started to come on board.

Q: What is this Nido you refer to in the intro?

A: Nido Cafe replaced Magpie at 14th & R. It's a cafe run by the same owners, serving breakfast and lunch only for now. I had a delicious biscuit, egg and bacon sandwich there on Sunday morning. It was like a delicious and from scratch version of the one you get at McDonald's when you're hung over.

Thanks again to Magpie owner Roehr for taking the time to talk to me and explain.

You can also read a long Facebook post with many comments on the new kitchen tip here.

First Impressions: Magpie offers more space, same seasonal freshness - The move to a larger space was a smart one, considering the amount of business Magpie draws. The food on our lunch visit was as high quality as ever. The heirloom tomatoes in the BLT were fat and juicy, and the bacon crisp yet malleable. That bacon also contributes to the ingredient- and flavor-stacked goodness of Magpie’s burger, which is anchored by a substantial, perfectly seasoned Niman chuck patty. Carla Meyer in the Sac Bee.

Bakery/cafe is ready for its debut on R Street - Well, that was fast. Weeks after opening a new location at 16 Powerhouse, the owners of Magpie Cafe are ready to reopen their R Street site with a new format. Sonya Sorich in Sac Biz Journal.

New brewery prepares to open in East Sacramento - The wait is almost over for fans of Twelve Rounds Brewing Co., a new brewery in East Sacramento. The venue will hold its soft opening Aug. 1, according to a Facebook post from the business. Sonya Sorich in Sac Biz Journal.

Transcendent berries: Strawberries and cream, Localis - Strawberries, both raw and roasted, are served with purple shiso, a delicate panna cotta and a delightful little serving of strawberry sorbet. It sounds simple, and it is. It's the eloquent execution that's so transcendent. Garrett McCord in Sac News & Review.

Questionable Trivia at Easy on I - Do you know the lyrics to every Beatles song by heart? How about the name of the dog that Russia shot into orbit during the space race? Or what “apiology” is the study of? You’re in luck: Your useless knowledge can be put to work. At the cozy Easy on I bar and grill on Thursday nights, charming quizmaster Matt Russell, owner of Questionable Trivia, rattles off ever more challenging questions relating to the night’s three categories, typically broken up by two rounds of specific topics, which change every week, and one catch-all round of general knowledge. Barbara Harvey in Sac Mag.

Try It: Lemon Grass’ Salad Rolls - Thai food has been all the rage lately, and few do it better than Lemon Grass. Their fresh, hand-made Southeast Asian dishes are as refreshing as they are delicious. Kristopher Hooks in Sac Mag.

Want a drink? Need a haircut? Bottle & Barlow offers both on R Street - There are barbershops, and then there are bars. And then there is Bottle & Barlow, filling a need that Sacramento might not have even known it had by putting the bar in “barbershop.” The new establishment—which opened on July 11 at 12th and R streets on the ground floor of the Warehouse Artist Lofts—conjoins a sleek watering hole overseen by Jayson Wilde (previously of the San Francisco hot spot Bourbon & Branch) with a gleaming salon run by Anthony Giannotti, the proprietor of the local hipster hair mecca Anthony’s Barber Shop. S.T. VanAirsdale in Sactown Mag.

Something Fishy in Sacramento - Anna Larsen, a formally trained opera singer and lover of seafood, wanted to take the guessing game out of purchasing sustainable seafood by delivering it right to your door. Her concept echoes the community supported agriculture produce model in which the customer agrees to pay up front for a share of a farmer’s harvest and in return receives a regular box of produce fresh from the field. Larsen created Siren Fish Co. as an ocean-to-fork program that operates from a similar boat. Customers pay for for shares in advance and then receive a box of freshly caught, local and sustainable seafood each week. Amber Stott in Comstocks Mag.

VIDEO: Mamas & Tapas Food Truck - The studio is being filled with food straight out of Puerto Rico with a little Caribbean Fusion added to it! Cody Stark on Good Day Sac Part 1 | Part 2.

I was told by a friend who works there that they've seen their tips drop in half. Rather than splitting the tip as the little sheet recommends (15 to 18 to the server, 3 to 5 to the kitchen), people are largely splitting the same amount of money, often equally. The server is being forced to consider leaving or taking on another job.