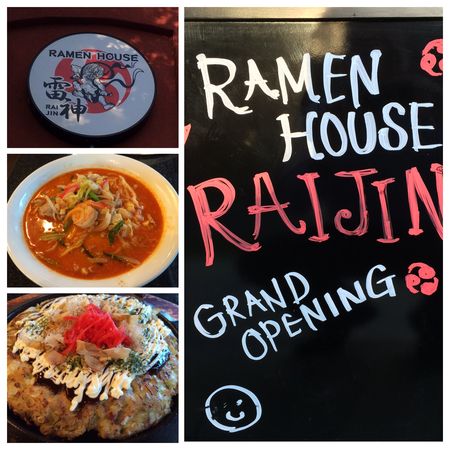 The restaurant is the most recent effort by Sai Wong, who recently switched concepts for that location from Izakaya Daikoku.

Wong also owns nearby Ryujin Ramen House, located a half block away in the Safeway parking lot. He previously owned sushi restaurant Akebono in Land Park, but recently sold the business.

I ate at Raijin last weekend and found it to be surprisingly busy for a new restaurant without much publicity surrounding its opening.

They continued to serve okonomiyaki ($10), a savory Japanese pancake, but had new styles of ramen not served at Wong's other restaurants including a Spicy Champon ($10). This is what Wikipedia says about this style of ramen:

Champon, also known as Chanpon, is a noodle dish that is a regional cuisine of Nagasaki, Japan. Due to the inspiration from Chinese cuisine, it is also a form of Japanese Chinese cuisine. Champon is made by frying pork, seafood and vegetables with lard; a soup made with chicken and pig bones is added. Ramen noodles made especially for champon are added and then boiled. Unlike other ramen dishes, only one pan is needed as the noodles are boiled in the soup.

If you're a ramen aficionado, I'd definitely recommend checking the place out.

Small-Batch Food Stars - It must be something in the water. After all, how else do you explain the large and constantly expanding number of food entrepreneurs in Sacramento? The region is an incubator for all manner of homegrown food businesses, from small-batch whiskey distillers to artisanal beef jerky producers. Just call us the Silicon Valley of delicious startups. Meet our makers. Featuring Amador Distillery, Gold River Distillery, The Good Stuff preserved fruit, Tule's Cookies, Midtown Jerky, Ocean Beach Foods. Co curry and Fork Lifter Food Truck.  Marybeth Bizjak in Sac Mag.

The Chef’s Table - The Rocklin-based eatery is expanding. Earlier this month, it acquired the space next door that currently houses Kona Café, which owners Erick Johnson and Jon Irwin plan to turn into a new breakfast and bar area for the cozy eatery by fall. In Sactown Mag. (Fifth Item.)

Metro Kitchen + Drinkery - Metro Kitchen + Drinkery is putting a new spin on the juice “bar” in their space by serving mimosas, hard ciders, kombucha and healthful cocktails like the Mary Verde, made with Han Vodka and the drinkery's Leaves + Juice (which includes kale, spinach, bok choy, cucumber and lemon), as well as their cold-pressed juices. In Sactown Mag. (Third Item.)

Summer Food Events - What will you eat this summer? - The great thing about Sacramento is that we have food events all year long.  Our name of Farm-to-Fork Capitol is appropriate with everything from Baconfest to the Banana Festival. In fact, sometimes competition is fierce for your attention and your dollar. We are also blessed to be in the middle of so many destinations. With Napa, Tahoe, Reno, San Francisco, Santa Cruz, Monterey/Carmel, and Yosemite so close by, there are events to select from throughout Northern California. Below is the Foodie Calendar through September's Farm-to-Fork Festival. The ones with comments are my favorites that I return to year after year. Catherine Enfield on Munchie Musings.

Temple Coffee to Open in Davis - Temple Coffee will open its Davis doors on Saturday, Aug. 15, at the southwest corner of Third and G streets. Wendy Weitzel in the Davis Enterprise.

Sacramento Guide to Retail Beer - So where does one go to stock up on the good stuff to enjoy while lounging on the balcony or kicking it with friends in the backyard as the kids run around? This is City Scout’s guide to some of Sacramento’s finest locally owned bottleshops – the curated retail establishments where you can pick up some excellent brews that don’t come around on tap very often. Featuring Taylor's Market, Pangaea Bier Cafe, Corti Brothers and Capitol Beer & Taproom. Chris Tan in City Scout.

Roseville taproom serves up sweet deal to franchisee next door - It was no such cakewalk when the Karimis arrived in Roseville. They knew they had to build the name recognition for their two brands. With a limited budget for advertising, the Karimis said, they decided to focus on nurturing an informal partnership with the neighboring Final Gravity Taproom & Bottleshop. Cathie Anderson in the Sac Bee.

Insight Coffee Roasters bring Farm-to-Cup Experience to New Location - Ryan says that Insight plans on expanding even more in the coming months. They anticipate an expanded coffee program with the new Edible Pedal in West Sacramento, where Insight coffee has already been served in limited forms. Ryan hopes to make the full experience available to that side of town. On top of that, a new café on the 700 block of K street is in the works. Alia Cruz in Submerge Mag.

VIDEO: Dishin’ With Tina: Off The Hook - Tina is at restaurant where they specialize in tasty seafood. Tina Machua on Good Day Sac.