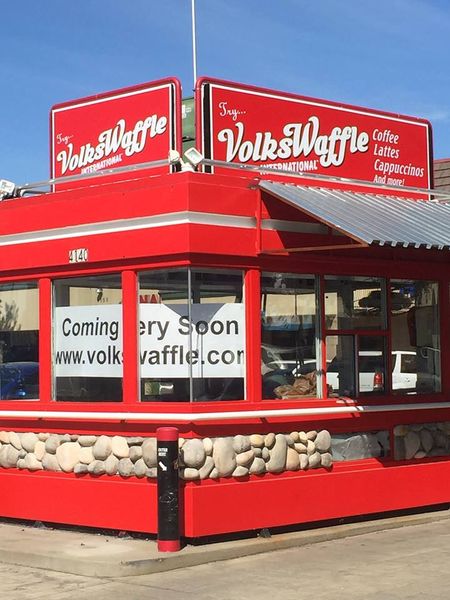 Volkswaffle, the delightful food truck that serves liege waffles, has opened its long-awaited brick and mortar location in Carmichael.

According to a liege waffle blog, "authentic Liège waffles are one of life’s great indulgences — caramelized sugar glistening on the most delicious buttery-sweet, vanilla-laden treasure beneath."

In addition to their signature waffles, Volkswaffle will be serving hot, iced and blended coffee and a new Flemish Brussles Waffle soon.

So what's a Brussels Waffle and how is it different than a Liege waffle? I didn't know either, but this is what the Internet says:

Brussels waffles were made with a thin, yeast-leavened batter which makes them lighter and their appearance is more rectangular with deeper holes and smooth edges. Liege waffles (named after a town in Eastern Belgium) are made with a batter that is more like bread dough; thick and sticky.

Volkswaffle is one of my favorite sweet treats. Every time I see them, I pull over and grab a waffle.

Volkswaffle is located at 4140 Manzanita in Carmichael, and can be found on Facebook.

Rita's Italian Ice opening first local store this month - About a year after announcing plans to enter the region, Rita's Italian Ice is opening its first Sacramento-area location. A store at 1177 Riley St. in the Folsom Central Shopping Center is expected to open at the end of July, according to the Pennsylvania-based franchise. Sonya Sorich in Sac Biz Journal.

Innovative dive bar set to rise from the Embers - A trendsetting Bay Area restaurateur and cocktail innovator has picked an unlikely site for his first Sacramento venture: the former Embers strip club on Auburn Boulevard. Tom Schnetz, a Sacramento native who owns five East Bay restaurants and bars, is teaming with boyhood pal Jeff Tochterman to open a bar and cocktail lounge called the Cinders. Bob Shallit in the Sac Bee.

Beer Run: Sacramento’s Twelve Rounds Brewing goes the distance - There were moments over the past three years when Dan and Elle Murphy, frustrated by delays and staggered by cost overruns for overhauling an old building that was not up to code, felt like scrapping the whole idea. But Twelve Rounds Brewing wasn’t merely a business plan or a job. It was a dream. Dan had been brewing beer at home for years. He had won raves from friends. He’d racked up numerous awards in home-brew competitions. This brewery, if he and his wife could ever pull it off, was going to be his life. Blair Anthony Robertson in the Sac Bee.

Speak-easy boba: Milk tea, Vampire Penguin - Ordering boba milk tea at Vampire Penguin felt like how I imagine ordering whiskey would have been at a speak-easy during Prohibition. I couldn't find any drinks on any menu, so I just walked up and asked, “Got any drinks?” Answer: Thai tea or milk tea. Jonathan Mendick in Sac News & Review.

Doughnut shop combines screams and sprinkles - This doughnut knows what you did last summer. But don't let that distract you from the allure of its bacon topping. A new business that combines doughnuts and the horror genre is in the works at Watt Avenue and Kings Way in Arden-Arcade. Sonya Sorich in Sac Biz Journal.

10 delicious ways to roll with it on International Sushi Day - As International Sushi Day rolls around on Thursday, June 18, we’ve packed together 10 of the region’s most popular rolls—from a fiery seafood sensation to a sweet roll made with Rice Krispies Treats—for you to sink your teeth (and chopsticks) into. Featuring Akebono, Azukar Sushi, Blue Nami, Ju Hachi, Kru, Lou's Sushi, Mikuni Kaizen, Soho Sushi, Tokyo Fro's and Zen Toro. Jason Pham in Sactown Mag.

Bombolone Cafe - Located on the first floor near the southwest entrance next to Starbucks and Jamba Juice, the desserterie will offer ice cream-filled donuts, ice cream sandwich cookies and other desserts like bread pudding. In Sactown Mag.

VIDEO: Magpie’s New Location - The popular restaurant is at a new location that is bigger and better. Tina Machua on Good Day Sac.