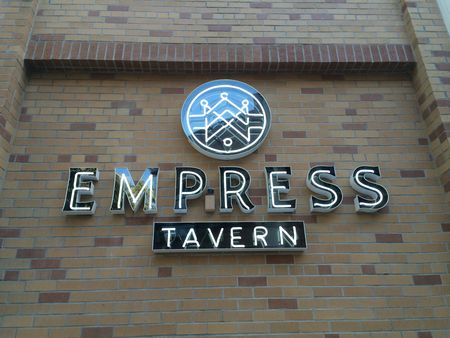 Empress Tavern is scheduled to open on next week, and they've been giving previews to local media. The Sac Bee's Chris Macias tweeted that the space is a "game changer."

Here's a little more from S.T. Vanairsdale in Sactown Mag.

Thiemann promises a meat mecca when Empress opens, a carvery rooted in the sanctity of the French dip and with heaping servings of everything from prime rib to short ribs to seafood and even the turducken—the Thanksgiving specialty of chicken stuffed inside duck, then stuffed inside turkey, that Empress will offer year-round.

Former Mother chef and longtime Thiemann confederate Matt Masera will lead the kitchen, a massive space with a rotisserie oven at its heart, pastry and ice cream stations at the ready (desserts are Masera’s forte) and a halo of gleaming pots, pans and other implements dangling from the ceiling.

“It’s like a steakhouse, but with all meats, which allows us to keep the price point really reasonable,” says Thiemann, who emphasizes Empress highlights like salmon and Hangtown fry (the oyster omelet delicacy hailing from the Gold Rush) nearly in the same breath as bone marrow with escargot.

Vanairsdale also reports that the opening date has been refined from the week of Aug. 31 to 5:30 p.m. on Wednesday, Sept. 2.

Empress Tavern is located at 1013 K Street, and can be found at EmpressTavern.com.

Here's what happened after I ordered a glass of wine at Starbucks - Instead of "tall" or "grande," I was deciding between pinot noir and sauvignon blanc. And strangely, extra whipped cream was not an option. Welcome to the new Starbucks experience. Sonya Sorich in Sac Biz Journal.

Sacramento’s thriving cocktail culture lures back a hometown star - Scores of Sacramentans have faced this dilemma: Should I stay, or should I go? Jayson Wilde grappled with this choice five years ago. Burned out from his desk job at a Roseville insurance company and unhappy that his punk band was stuck in limbo, he took a side job as a bar back at the Shady Lady Saloon on R Street. There, he found his calling making craft cocktails – impeccably prepared mixed drinks featuring fresh ingredients and dynamic flavor combinations. Chris Macias in the Sac Bee.

Truly, deadly, delicious - Formoli’s Bistro radically changed its lunch menu for the first time since, well, ever. The only remaining items are the stuffed dates and—don’t freak out—the whiskey burger. That means there are a whole lotta new dishes to try. I recently sampled a simple salad with perfectly seared salmon ($12); a fried chicken sandwich that surprises with a light tempura-beer batter ($10); and deadly, deadly braised lengua tacos ($9). Sometimes, the taco plate offers pork instead. But when it’s lengua—my goodness—you must. Janelle Bitker in Sac News & Review.

Sweet, savory, seasonal: Prosciutto and watermelon pizza, Paesanos - Meat and melon on a pizza? I wasn't so sure about it going in, but I've seen the light. Paesanos' delicious seasonal pizza ($13.95) has just the right balance of sweet and savory on top of a tasty crust. Meg Masterson in Sac News & Review.

The Berhane sisters serve up coffee with a side of sass at Tiferet - Sabrina and Makeda Berhane have made their East Sacramento business, Tiferet Coffee House, such a neighborhood gathering place that not long ago, a young man who had just passed his bar exam brought in champagne for the sisters and their customers. The reason: He had done most of his studying there. Ed Goldman in Sac Biz Journal.

The Porch - Midtown’s low-country restaurant has launched a new dessert menu and brought a new bar manager on board. Bar manager Ben Smith has been with The Porch for just four months and is already shaking things up, drawing on his extensive experience at San Francisco bars and restaurants, like the Mission District’s Beretta, to reinvigorate the cocktail menu with a list of seasonal drinks. In Sactown Mag. (Fourth Item.)

VIDEO: Dishin' with Tina: La Trattoria Bohemia - Tina is checking out a place where they make tasty Italian and Czech cuisine. On Good Day Sac.

VIDEO: New Rocklin Barbecue Spot - Gary is out in Rocklin at Heavy Kevy’s BBQ digging into meat fresh out of the smoker. Heavy Kevy’s is now in their fourth week of operation but owner Kevin has been barbecuing for 25 years. Opening a restaurant with his family has been a dream of Kevin’s.; check out their menu items in the video. On FOX 40.

VIDEO: Northern California growers experiencing early grape harvest - The grape harvest is early this season as growers said the early spring got things off to a quick start. David Bienick on KCRA.