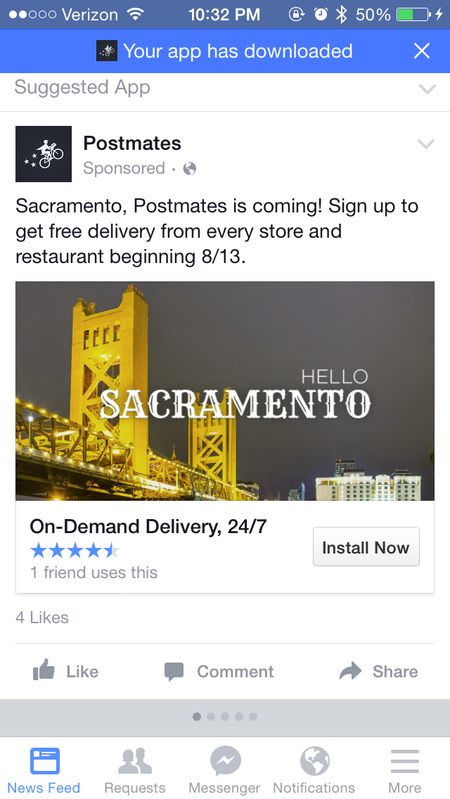 Postmates, an app that promises on demand delivery from any restaurant or store that prepares to-go orders, will launch on Thursday in Sacramento.

Here's how the company describes itself:

Imagine being able to order in brunch from Cafeteria 15L, dinner from Mikuni Japanese, a charger from the Apple store and groceries from your local market — with a couple of clicks. Postmates makes that possible by picking up from merchants that don't offer delivery themselves. The app, available for iOS and Android, as well as Postmates web, allows users to browse an inventory of thousands of restaurants and stores in their city, add items instantly, watch their rated "Postmate" moving on a map, and track their order status in real time. Deliveries start at $5 and customers pay for everything within the app — including tip — so you never have to run out and get cash.

To help promote their launch, they're offering FREE sandwiches from Roxie Deli from Thursday, Aug. 13 through Sunday, Aug. 16 from 11 a.m. to 7 p.m. Realistically, you could have lunch and dinner on Postmates (and their venture capitol funders) for four days from Roxie over that time span for free. Their free offer includes both the delivery fee and the price of the meal. Everything is free. Just download the app, select the Free Roxie Deli On-Demand store, add your choice of specialty sandwich and request delivery.

In addition, for the first 500 people who download the app and enter code SACVIP will get $50 in credit (good towards delivery fee) added to their account (expires 9/15).

Finally, they're waiving all delivery fees for the entire month of August.

So what are you waiting for? Your annoying friends in San Francisco and New York are already enjoying the on demand lifestyle. You should too.

Here's where they serve: 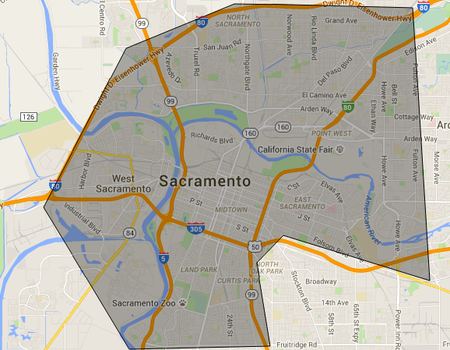 6 Farm-to-Fork Events You Might Miss (but Shouldn’t!) - When the Sacramento Convention and Visitors Bureau declared Sacramento as America’s Farm-to-Fork Capital in 2012, the region exploded with ideas and events. The Farm-to-Fork Festival will take place on Sept. 26, but Sacramentans have embraced the farm-to-fork identity with their own activities beyond SCVB’s planned events. Here’s the beat on six unique events that will get you out of traditional city spaces for a combination of farm and urban culinary experiences, beginning in Farm-to-Fork Month and extending into the fall harvest season. Amber Stott in Comstocks Mag.

Feast Q&A: Winging it for charity - Nick Berruezo’s inspiration for the Sactown Wings Festival was simple: Sacramento loves festivals, and people love wings. The charity event, set for Aug. 15 at Cesar Chavez Park, debuted last year with more than 1,300 attendees. This year, organizers expect the crowds to return to enjoy more than 40,000 wings from at least eight different local vendors. Jeanne Kuang in the Sac Bee.

The next Subway? Get ready for more sandwich chains - An innovative food trend is spreading throughout the Sacramento region: meat, cheese and produce between two slices of bread. Sound familiar? You're right. Amid seaweed-topped hot dogs and doughnut ice cream sandwiches, the tried-and-true sandwich is alive and well. Featuring Jersey Mike's, Jimmy John' and Which Wich Superior Sandwiches. Sonya Sorich in Sac Biz Journal.

Comparing Fast Casual Pizzas - As a personal preference of ranking, I definitely thought it was Blast as the best and Pieology and Blaze as being pretty much tied. Blast wins because of the better crust, the large assortment of cheese and toppings, and finally with the selection of spice blends to add at the end. Pieology had better crust than Blaze, but Blaze had more toppings and spicy sauce. Catherine Enfield on Munchie Musings.

A Trip to Sonoma Where Something New Is Brewing - Though it’s still best known for its wines, northern California’s Sonoma County has a burgeoning craft-beer scene that’s drawing a crowd. Debra A. Klein in the WSJ.

VIDEO: 2nd Annual Sactown Chicken Wings Festival - Everybody loves a festival, and pretty much everyone loves chicken wings right? So why isn’t there a festival dedicated to this delicious food?! While Sacramento has plenty of beer fests, bacon fests, and chili fests, there was a severe lack of tribute being paid to chicken wings in the area, and we set out to change that! Join us at Cesar Chavez Park on August 15, 2015 from 3-7pm for Sacramento’s 2nd annual chicken wing festival, Sactown Wings. There will be music, games, cheap beer, and over 40,000 chicken wings! Gary Gelfand on FOX 40.