Dining News: Noodles to Thai For to Replace Shoki on 24th 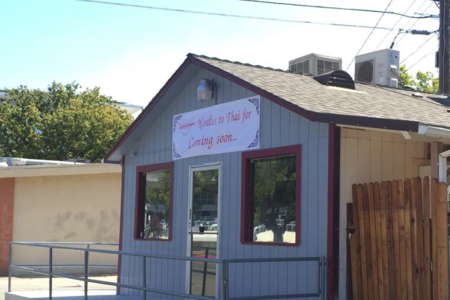 Shoki Ramen House, which is in the process of moving from its original location on 24th St. in Curtis Park to the old Trails Restaurant on 21st St., will be replaced by Noodles to Thai For.

I reached out to the restaurant owners on Thursday afternoon for more details, but did not hear back as of the time of publication.

On Twitter, this is how they tease their restaurant:

The restaurant, which had targeted an August opening, now expects to open in September.

As for Shoki, I drive by their new location once a week, but it still looks like construction is going on inside the building. I'll let you know when it opens. Of course, those seeking their Shoki fix can still head to their R street location.

Hot-pot restaurant Boiling Avenue joins local dining mix - While hot pots are often a group endeavor, Boiling Avenue will specialize in "mini personal hot pots," according to Tran. Each guest will prepare his or her own meal in a personal-size pot over heat. Individual meals usually take between five and eight minutes to cook. Sonya Sorich in Sac Biz Journal.

Downtown Sacramento sports-bar owner to revive Beermann's in Lincoln - The developer of a high-profile new sports bar near Golden 1 Center has another project in the works — reviving Beermann’s in downtown Lincoln. Curtis Smith owns the building that formerly housed the Zokku nightclub at 419 J St. in downtown Sacramento. Another group will open and operate sports bar Triple Double in that building within the next month. Ben van der Meer in Sac Biz Journal.

Blackbird Kitchen + Beer Gallery - Major changes include what co-owner and executive chef Carina Lampkin calls a “bigger, badder" 30-foot-long redwood bar that will run the length of the downstairs tavern (as opposed to two smaller bars in the space)...She expects renovations to be complete by mid-September. In Sactown Mag.

Sacramento Ranks Among Craft Beer-Loving Cities - It’s no secret that the River City loves its craft beer. According to Market Watch, craft brew accounts for a third of all the beer sold in Sacramento. Ian McDonald on FOX 40.

Pre-Flite Lounge Re-Emerges at a New Location, Bringing With It Many Familiar Faces - Where there once was a bar, hidden in a seemingly abandoned basement corridor of the downtown mall, there now exists a crater under construction. The Pre-Flite Lounge was a 40-year-old time capsule, a quaint bar untouched by time, that perhaps lingered because it was forgotten. The Pre-Flite Lounge was lukewarm domestic beer served in frosted mugs to offset the tap temperature. A heavy hand poured no-nonsense cocktails like whiskey-water, gin-tonic and vodka-soda. When the craft-craze of artisanal beer and cocktails swept through Sacramento, the Pre-Flite didn’t balk and no one seemed to mind. Former regulars look back and their memories are unified by signifiers like “unpretentious” and “classic.” Everyone remembers their first time and becomes protective of who they tell out of respect for the bar. Blake Gillespie in Submerge Mag.

AUDIO: Kushman By The Bottle: Vineyards And Wildfires -  Many wine grape growers in Northern California are harvesting early this year. You might think lack of water is causing the grapes to ripen earlier, but that’s not exactly the case. In this month’s installment of Kushman By the Bottle, Capital Public Radio’s resident wine expert Rick Kushman explains how warm weather affects grape maturity. On Capitol Public Radio.