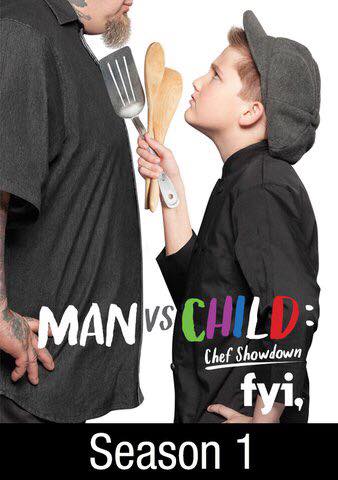 Chef Keith Breedlove, a chef about town who was recently the official State Fair Chef, will appear on FYI TV's Man vs. Child: Chef Showdown show on Thursday at 6 p.m. and again at 9 p.m. (depending on your cable feed).

Culinary and literal giant, chef Keith Breedlove muscles his way into the kitchen to see what all the fuss is about. But when he squares off against 7 year-old chef Estie in the "Poulet-Trois" will he crow like the rooster? Or run away chicken? Legendary Master Chef, Ludo Lefebvre, joins to blind taste and judge the winner takes all final round.

You can find Chef Breedlove normally on his Culinerdy Cruzer. Late last year, the Sac Bee's Chris Macias wrote a great profile of him, detailing his journey as a chef and how he uses his Asperger's to his advantage.

These kids can out-cook any ordinary grownup, but can they face off against their favorite chefs? The competition is HUGE on an all-new #ManVsChild: Chef Showdown, Thursday at 9/8c!

These kids can out-cook any ordinary grownup, but can they face off against their favorite chefs? The competition is HUGE on an all-new #ManVsChild: Chef Showdown, Thursday at 9/8c!

You can find FYI TV on the following channels:

For those who don't have cable (like me), Chef Breedlove is hosting a watch party at The Falls Event Center in Elk Grove at 5:30 p.m.. Click here for more details.

Local and seasonal: Chefs preview five-course menu for Tower Bridge dinner - With an emphasis on the region’s rich bounty and the crossover from summer into fall, chefs on Monday previewed the five-course menu for the eagerly anticipated Sept. 27 Tower Bridge dinner...A closely guarded secret for weeks, the menu promises to offer plenty of creativity, technique and variety, including a sturgeon pastrami with heirloom beets, endive and, yes, chicharones made with the skins of the fish that are fried until they are puffy and crisp and, we’re told, mouth-wateringly delicious. Blair Anthony Robertson in the Sac Bee.

The Parlor Ice Cream Puffs - This popular ice cream shop, best known for its donut ice cream sandwiches, expanded to Roseville with a new location that opened Aug. 8. Larger than the original ice creamery in Arden-Arcade, the Roseville space includes a room for guests to reserve for special occasions and an airy interior with modern tiling and foliage spilling from planter boxes lining the light gray walls. In Sactown Mag. (Third Item.)

Bakers celebrate 25 years of a flourishing business - Walking into the Grateful Bread bakery is to become enfolded in an aromatic cloud of homey comfort. Is there a more enticing smell in the food world than freshly baked bread, or one more evocative of sweet childhood memories? The family-owned wholesale-retail bakery turns 25 this month, still occupying the same quarters in Loehmann’s Plaza that it did when husband-wife Joe and Dianna Artim mixed dough for their first loaves in 1990. Allen Pierleoni in the Sac Bee.

Beer Run: From IPAs to German brews, ‘The Beer Bible’ sets record straight - Whether you’re a bona fide beer geek, are studying to be a cicerone or simply want to know why your coolest friends always seem to be heading to a brewery taproom with their kids and dogs in tow, there’s a big new book that will enlighten and entertain you for 600-plus pages. There are plenty of good beer books out there, but none is as thorough, wide-reaching and accessible as “The Beer Bible” by Jeff Alworth (Workman, $19.95, 644 pages). Its publication is a big deal because, it turns out, the more you know about beer, brewing and the history, geography and culture of beer, the more likely you are to become a devoted beer lover. It’s a simple formula: More knowledgeable consumers will buy more good beer. Blair Anthony Robertson in the Sac Bee.

Drowning in ice cream and coffee - Is it really counterintuitive to make ice cream that doesn't contain any cow cream? Of course not; it is a deliciously wonderful idea, and the proof is in the affogato. The Italian treat of coffee and ice cream (which means “drowned” in Italian) gets the latter from Maiden Sacramento Ice Cream, the apparent dessert branch of the food tree whose canopy also contains Mother and the forthcoming Empress Tavern. Shoka in Sac News & Review.

Playboy likes something about Sacramento, and it's probably not what you think - Sacramentans have a reason to say they read Playboy magazine for its articles. Well, at least one in particular. On Aug. 21, Playboy spotlighted Sacramento's Shady Lady Saloon at 1409 R St. as one of its "bars we love." Sonya Sorich in Sac Biz Journal.

VIDEO: Temple Coffee Roasters - Temple Coffee is a quality-focused retail and wholesale roaster based in Sacramento and Kristin is checking it out. On Good Day Sac.

VIDEO: Jimboy's Tacos, Sacramento fast food landmark, heading to India - Jimboy's Tacos, a fast food Sacramento landmark, is expanding to other states like Texas and Washington. But it's also heading to a place where many people least expect it---India. Mumbai, India is a city that can overwhelm the senses with sounds and color, flavors and tastes. It's a perfect place to savor six decades of a Sacramento tradition with the anticipated arrival of a Jimboy's Tacos restaurant. Suzanne Pham on News 10.

VIDEO: Small Businesses Take a Hit on Egg Prices - Shoppers can pass on buying high-priced eggs, which are averaging over $6 for a dozen at most supermarkets. But small bakery owner Terri Littleton says she doesn’t have options. Lonnie Wong on FOX 40.