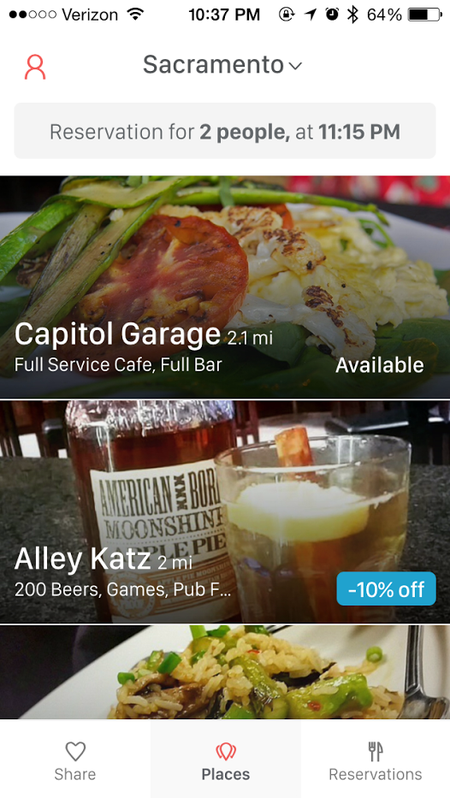 Requested App, by a team that includes Sonny Mayugba, a partner in midtown's Red Rabbit, recently launched version three of its restaurant app.

I asked him to help Cowtown Eats readers understand what the app does and how it works.

Here's an e-mail Q & A I did with Mayugba over the last week:

1. A third iteration of Requested was just released. How has the concept evolved over time and what does it do now?

Our core concept has not changed at all: we want to help independent merchants keep doing what they love and connect great customers to great places. However, the way we’ve tried to achieve this through the product has evolved like crazy!

First, we gave users the ability to name their own price in a Request and merchants the ability to approve or deny those Requests. People liked the concept, but the app was too complicated. We spoke with hundreds of users and restaurant partners, listened to their feedback, and simplified the experience. It is the best thing we’ve ever done. Now users view a selection of dynamically-priced table options they can book which vary in price depending on time of day.

That’s just the discovery side of the app, however. The real magic of Requested is in the dining experience itself. After your table is booked, you go to the restaurant and the host already knows your name. You get excellent service and when you’re done, you can just leave. The payment for your meal, including tip (a percentage you can adjust in the app during your meal), is calculated and handled through the app. You never have to worry about waiting for the check or calculating the tip, and we email you your receipt when you walk out the door.

The seamless payment system through Requested saves servers and diners an average of 10 minutes per table, and that really adds up. The other side of it is that our default tip percentage in the app is 20%, and while users can lower the tip amount, most do not. So the value of a customer using Requested is generally higher for servers, which makes for a better, happier experience all around.

While 20% may sound steep to some people (and like I said before, they can adjust the percentage), as someone who has worked in the restaurant industry for decades and now co-owns a restaurant, I believe that staff deserves that level of tipping, so I love that the app is inadvertently helping out some of the hardest-working people I know.

2. Why did you move away from some of the previous features?

Data and behavior. When you build a product or create anything - a song, a poem, a restaurant, a new car - you have preconceived notions on how people will react. And as entrepreneurs, we’re always too optimistic. And as founders, we all have two things in common: notions of what will work and things we want to build that will make our time spent meaningful. But those two things can be nebulous and shifting. The one factor we all can agree on is data.

We launched in March of 2015. And between then and now, we shipped a few cool features. But there were three glaring data points that caused us to pivot:

Forcing our restaurant partners to say “no”, even to a seemingly obvious ludicrous request, was damaging across the board.

We could dive deep for hours into this question, but those were the primary factors that caused us to look at changing how the app functioned. Everyone - foodies, restaurants, press and investors - really loves our concept. But in order to accomplish our goal of making the restaurants more busy and foodies happy, we had to do the following:

Make the app two taps with an instant guaranteed yes every time.

And that’s exactly what we did.

3. What restaurants in Sacramento participate?

Independent, locally owned and operated places that are awesome. We curate our merchants. You can’t just sign up. You will not see a Subway, Panera or Wendy’s on Requested. I’m not against those places, I even love In N’ Out, but our mission is to grow the business of our independent restaurants without incurring any additional fixed costs. And we’re literally doing that and it’s providing true incremental margin to their bottom line.

With the success of our latest version of the app, we’re actually a little backlogged working to get a bunch of new places live! The best way to know which places are on Requested is to take out your phone and launch the app right now. Keep checking, because the list keeps growing.

4. How does the app know how much of a discount a restaurant is offering?

Some things need to remain a secret.

5. You guys are nice guys, but there must be something for you. What's the revenue stream

Awww, thanks! Of course there’s something in it for us, we need to be around forever and you can’t do that on nothing. Our app is 100% free to consumers and there is no upfront cost or fees to our merchant partners. However, when someone places a reservation and enjoys their experience, Requested receives a percentage. We’re like eBay and HotelTonight. We only get paid if both sides of our market are successful and happy.

6. Why should someone use the Requested App instead of some of the other reservation systems out there?

There are two key differentiators:

Requested has 8 employees, four of which are founders and we’re all local to Sacramento:

Sonny Mayugba, Nichole Barnum, Jon Shumate, and Carlos Rivera are all founders. Dani Loebs heads up growth, Randy Balzarano heads up sales, Carlos Sola-Llonch is our Senior software developer and Katie Stein is our Merchant Ambassador. We also have a key Angel investor, Dave Pringle, who leads a lot of our structure and financial development and lead our first friends and family round of investment. We have an Advisory Board of amazing and active people. Our seed series round was led by Jason Calacanis, so we work closely with him and his tribe. Plus, we were funded by Social+Capital Partnership, so they weigh in on our development as well. We also have half a dozen part-time employees. We’re a small, scrappy team driven by a love of tech and restaurants and bars.

8. Is there anything else that I haven't asked that people should know about?

That’s a great question. I want our mission to be clear: we help high quality local businesses do what they love. So as we evolve, we are saluting this everyday.

On a fun note, something we’ve started with Requested that has been really fun are our happy hour parties. We partner with our restaurants and users every week or so to talk about the app, stay in the know about innovation and happenings in Sacramento and always keep the feedback and dialogue open with our users base. To find out more about our events, I’m just going to give a quick shout out to Like us on Facebook and subscribe to our events, because usually we give away free cash on the app.

One more thing! We have a pretty killer referral program built right in the app itself. Users can send $10 to their friends to try Requested, and if the friends use it, the user who sent the invite gets $10 dropped into their account as a thank you. So if you have a big social network and love Requested, we’ll pay you to spread the word.

Lastly, I encourage anyone and everyone to contact me directly. My cell is 916-320-3560 (text me) or email me at sonny@requestedapp.com or tweet me at @sonnymayugba. Most of all, thank you for all the support. -Sonny Mayugba

For Cowtown Eats readers who are just trying out the app, you can get a $10 credit by entering the by getting the app here. (Disclosure: I get $10 also when you get the free $10 in credit.)

The Requested Team is also holding a Happy Hour at Alley Katz on Wednesday, Aug. 26 from 6 to 9 p.m., where they'll give you a code for $5 (which is basically buying your first beer) and 15 percent off the rest of the night. Click here to register.

Bottle & Barlow's Jayson Wilde - Earlier this summer, bartender Jayson Wilde teamed up with barber Anthony Giannotti to open Bottle & Barlow, Sacramento’s first bar and barbershop under one roof. Wilde grew up near Natomas and learned the cocktail business as a bartender’s assistant at Shady Lady Saloon before going to work at San Francisco’s famed Bourbon & Branch. SF Weekly named him one of San Francisco’s new generation of bar stars when he was 28. Now 33, he’s back in his hometown, planting his craft-cocktail flag on the city’s white-hot R Street Corridor. Marybeth Bizjak in Sac Mag.

Pieology has quick, crispy pizza down to a science - The thin crust is perfectly crisp, with char visible on bottom, and tastes just salty enough to be memorable. There’s not enough material here to compare it with local craft pizza houses’ crusts, which tend to be larger. But crust crispiness remained consistent through the 10 Pieology pizzas we tried. Carla Meyer in the Sac Bee.

Temple Coffee & Tea - The local third-wave coffee mecca is taking its first step out of Sacramento and opened its doors in a new downtown Davis location on Aug.15. The interior will feature Japanese-inspired design with a 32-foot-long solid oak community table, thoughtful touches like a mid-century modern clock. In Sactown Mag. (Fifth Item.)

Bring the Funk - It looks like 9999 Thai-Laos Boat Noodle could still use more luck. On multiple visits, the spacious restaurant was completely empty, or contained just one other party. That meant more than 120 seats lay vacant, plus a large, desolate bar. A karaoke stage and its accompanying dramatic music videos hint at 9999’s potential as a nighttime destination. But for now, it’s just another undiscovered gem in south Sacramento. Janelle Bitker in Sac News & Review.

VIDEO: Lord of Rice - Finalists in Mikuni's Lord of Rice competition will go head-to-head to see who reigns supreme when it comes to rice. On Good Day Sac.

VIDEO: Wienermobile Comes To Sacramento - Mae and Christianne are having a good time in the Oscar Meyer Wienermobile. On FOX 40.

AUDIO: The Waffle Experience Garners Large Following - The Waffle Experience in Natomas has been open for about a year and already has a huge fan following. Word of mouth--including from Sacramento Mayor Pro Tem Angelique Ashby--is spreading the word about this restaurant which features everything waffles--with burgers, with salmon, with eggs, etc. Owner and manager Jeff Belaski and Chef Michael Donoho joined us in studio with their creations. On KFBK.