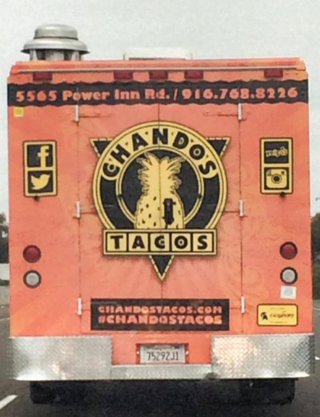 To celebrate one million rides in Sacramento, Uber is will deliver Chando's Tacos from 11:30 a.m. to 2:30 p.m. on Tuesday.

Specifically, you'll get three carne asada tacos and a side of chips for $5, a 20% savings from the menu price. Plus they deliver it to you instead of you having to drive to their restaurant.

While Uber only provides rides in Sacramento, it has dabbled in food delivery in other cities such as Los Angeles, Austin, Chicago and San Francisco. In those cities, Uber partners with a handful of restaurants to deliver food from, with the restaurants changing daily. Click here to learn more.

Sacramentans who want to order the $5 Chandos combo can do so via the Uber app, which you can download at Uber.com.

Cask & Barrel - This North Sacramento hot spot, which opened in February at the site of the former Enotria restaurant, just started serving brunch last weekend, with a menu that boasts items both sweet (the sugar-dusted French toast is made with Pugliese bread soaked in spiced crème brulee custard and served with jams, salted caramel and seared foie gras) and savory (the smoked pork shoulder hash features summer squash from Passmore Ranch, red-eye gravy made with Chocolate Fish Coffee and a buttery poached egg from Long Dream Farm in Lincoln). In Sactown Mag. (Second Item.)

Cold poke, Hot Italian and a warm Temple welcome - Hoping to start a wave in Davis, a Sacramento couple plans to open a Hawaiian poke restaurant, featuring build-your-own sushi bowls and boozy shaved ice. Zuma Poke and Lush Ice will fill the last ground-floor spot in the 3+G building, next to Temple Fine Coffee and Tea at Third and G streets. They hope to have it open by late November. Wendy Weitzel in The Davis Enterprise.

Track 7 Brewery Holds Annual Chili Cook-Off - Band leader and trumpeter Harry James once said, “Next to music there is nothing that lifts the spirit and strengthens the soul more than a good bowl of chili.” I think Harry may have been onto something, because spirits were lifted and souls were strengthened at the Third Annual Track 7 chili-cook-off at the taproom in Curtis Park. Greg Brown on SacramentoLand.

Hot Italian Coming to Davis - I have confirmed that the pizza and panini bar Hot Italian has plans to come to Davis Commons, filling the former Ben & Jerry’s spot last occupied by The Melt. The details are still being finalized, owner Andrea Lepore said Thursday. Wendy Weitzel in the Davis Enterprise. (Third Item.)

VIDEO: Ninja Sushi Anniversary - Ninja Sushi is celebrating their two year anniversary today and Cambi is checking it out. On Good Day Sac.