Dining News: And the Winners of the Sac Burger Battle Are... 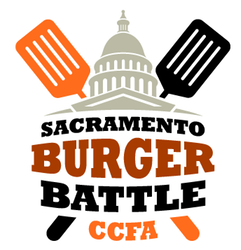 Coming in second for the judge's award was LowBrau, followed by Iron Grill.

The annual event, by Rodney Blackwell (also known as @BurgerJunkies on Twitter) to benefit the Crohn's and Colitis Foundation of America, pits 15 or so local restaurants against each other to determine whose burger reigns supreme. (Read a profile of the King of Burgers in Sac News & Review.)

This was the second burger-related accolade won in the last week by Pangaea Bier Cafe. The Sac News & Review tasted 50 restaurant burgers and deemed these the best burgers:

Cielito Lindo emerges from fire with good food - Cielito Lindo’s food approaches that of Mayahuel, Zocalo and Centro Cocina Mexicana – other local Mexican restaurants with ambitious menus – in quality, though its decor renders it visual country cousin to those upscale city slickers. Yet Cielito Lindo’s entree prices, running about $14-$25, are on par with, or higher than, those other restaurants' prices. One might consider Alarcon cheeky for charging those prices. But for my money, Cielito Lindo is the most interesting of the four restaurants. Within its mix of sophisticated flavors, busy colors and harsh lighting, one can see talent, trial, error, perseverance and a manifestation of one immigrant’s dream. Carla Meyer in the Sac Bee.

Please Wait to Be Seated: Dozens of new restaurants will be opening their doors in Sacramento in the coming months. But are there enough patrons to fill all those seats? - However — and this is a large however — many people, including Brown, worry that Sacramento could be roaring into a restaurant glut that could put pressure on current restaurants and those arriving soon. There’s no exact number (many owners haven’t announced plans or pulled permits), but the estimate from restaurant and real estate insiders is that 40 new restaurants will open in the city’s core in the next two years. Rick Kushman in Comstocks Mag.

Tiny Mraz Brewing seems bound for greatness - One name I would not be surprised to see pop up at GABF 2015 in two weeks in Denver is Mike Mraz of Mraz Brewing. He’s a skillful and creative brewer appreciated mostly by serious beer geeks, for now. Blair Anthony Robertson in the Sac Bee.

Another food gets its own celebration in Sacramento - Local restauranteurs are planning a multi-day "pizza extravaganza," according to event details posted on Facebook. The celebration, called Sliced, will be held Oct. 17 through Oct. 25. It's scheduled to include nightly specials, chef competitions, instructional sessions and a tour from Sac Brew Bike. So far, the list of participating restaurants includes Federalist Public House & Beer Garden, Hot Italian, Masullo, Chicago Fire, and Pizzeria Urbano. Others are expected to be announced later. Sonya Sorich in Sac Biz Journal.

Feast Q&A: Sacramento’s Vegan Chef Challenge in October - The fifth annual Vegan Chef Challenge is coming up, but if you’re not a vegan, that doesn’t mean you’re left out. Anyone interested in healthy restaurant options, creative cooking ideas and, with any luck, the discovery of a new favorite dish, will find this monthlong concept more than a curiosity. Bethany Davis, a teacher who has been a vegan for going on five years, created the challenge to get chefs thinking about food just a little differently. The dozen or so restaurants participating next month will be announced soon. A vegan dish, by the way, means no meat or other animal products, including cheese, butter and eggs. If you’re looking for more details about the health benefits of plant-based eating, check out the Forks Over Knives website. Blair Anthony Robertson in the Sac Bee.

Nutella brioche: Dessert for breakfast - My favorite way to satisfy both needs is the Nutella brioche ($3.50). It looks like a muffin, but it's infinitely superior. Janelle Bitker in Sac News & Review.

Botanical brew: Red Heather, Zeal Kombucha - Regardless of what those probiotics do or don't do, I will keep coming back to Zeal Kombucha's fantastic Red Heather...The result is a nuanced, crisp and refreshing brew, with a sour beer-like funk. Janelle Bitker in Sac News & Review.

VIDEO: Ludy’s Barbecue in Woodland - Paul & Sarun from Ludy's Main Street Barbecue in Woodland stopped by and surprised us-- they made Chicken Marsala! We weren't expecting that from one of our very favorite BBQ Joints. It turns out that Ludy's is also a full-service caterer, and there's lots more to their menu than simply delicious barbecue. Paul Robins on FOX 40.

AUDIO: Farm To Fork Event Sets Food Donation Record - Sacramento's Farm To Fork event organizers say they have broken the record for the most fresh food collected at one time. The record was 25,000 pounds. The new record is more than 170,830 pounds. Bob Moffitt on Capitol Public Radio.

AUDIO: California Craft Beer Summit In Sacramento - Sacramento is home to more than 40 breweries, giving beer drinkers more choices than ever. But the ever-growing craft beer scene makes it hard for any one brand to make a name for itself. Joining us to explain the difficulty of setting yourself apart and distributing your beer in a crowded market is JE Paino, owner of Sacramento’s Ruhstaller brewery. Rick Kushman on Capitol Public Radio.