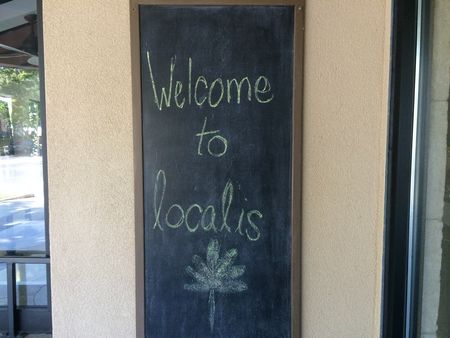 Localis, the latest in a string of restaurants at 21st & S, has been open almost two months, and its getting rave reviews.

The latest is from the Sac Bee's Carla Meyer:

That carpaccio dish also held cherry tomatoes, dressed in a foie gras vinaigrette, that flirted with best-thing-I-ever-tasted status. More seafood and/or vegetables, and less game, would have been welcome in the tasting menu. But the meal tasted special and thought-out, and Barnum makes a good host/chef. Friendly but low-key, he mostly lets his food speak for him.

Read the entire First Impressions column in the Sac Bee.

I've only had dessert there, and I found their strawberry dessert to be unique and impressive. I have it on the list of restaurants I want to head back to soon.

Strawberries and Cream for dessert at @eatatlocalis. ($9) Delicious. Bound for greatness.

On a side note, I think Meyer is really hitting her stride as the Bee's restaurant reviewer. Her writing is more confident and I've noticted that her more recent reviews have been more assertive. (Please don't intrepret that as a backhanded compliment. It's not intended to be.) I look forward to reading as her restaurant critic voice gets even stronger.

Downtown eatery resurfacing - Sacramento’s popular Blackbird Kitchen + Beer Gallery is set to reopen in late September – about four months after closing because of water damage linked to a broken pipe. Owners initially expected to have the repairs done in four to six weeks, but it took much longer to reach an agreement with insurers over how much of the damage was due to the broken pipe and how much was pre-existing in the century-old building at 1015 Ninth St., said Anthony Priley, a partner in the venture. Bob Shallit in the Sac Bee.

East Sacramento butcher at forefront of latest trend: Meat from the entire animal - The owners of a new butcher shop in East Sacramento want you to think beyond the ribeye. V. Miller Meats is expected to open within the next eight weeks at 4801 Folsom Blvd. As a whole-animal butcher shop, it will offer meat from the "entire animal, from nose to tail," according to Eric Veldman Miller. He owns the approximately 1,465-square-foot store with fellow chef Matt Azevedo. Sonya Sorich in Sac Biz Journal.

Bigger, brighter, cooler - Broderick Midtown officially opened last week and the menu is identical to the West Sacramento post. But the interior is an entirely different story. It’s Broderick the way Broderick is supposed to be—open and bright; rustic and casual; with a huge bar and, more importantly, a much bigger kitchen. The place just feels cool, in large part due to the striking number of vintage Edison-style lightbulbs strewn around. Janelle Bitker in Sac News & Review.

Food trucks, craft beer and live music at Harvest for Hunger event - Nab a scoop of gelato or a glass of Track 7 IPA for a good cause at the 7th annual Harvest for Hunger event. Thurs., Sept. 10. The lively street festival benefits the River City Food Bank, Sacramento’s oldest continuously serving food bank, whose volunteers have provided assistance to children, seniors, the homeless and the working poor for nearly five decades. Gregory Allen in Sactown Mag.

Hot Italian preparing to heat up Davis pizza wars - Plans are coming together for Hot Italian in Davis Commons. I met with founder Andrea Lepore, who is “super-excited to be here.” Lepore hopes to have the pizza restaurant open by late fall. It takes over the space last occupied by The Melt, and will expand into the spot behind it, where Verizon Wireless is, and add more patio seating. Verizon will move to Pinkberry’s former space. The Davis Commons center is at 500 First St. Wendy Weitzel in the Davis Enterprise.

First Taste of the Farm-to-Fork Gala Dinner Menu - According to Patel, the late-September date allows this year’s menu to “straddle the seasons.” Ridgeway agrees. The blend of ingredients — from squash to fig, tomatoes to greens — reflects both late summer and autumn, a time of year many chefs adore. “The table doesn’t look like July,” says Jim Mills of Produce Express, a local food purveyor. “And it doesn’t look like winter.” Amber Stott in Comstocks Mag.

VIDEO: Italian Ice From The East Coast - Gary is out at Rita’s Italian Ice in Folsom trying some tasty frozen treats. Rita’s is very popular on the east coast and they’re are bringing something new to the area. The grand opening celebration is not until September 24 but they are open for business now. On FOX 40.

AUDIO: Sakuramento Will Celebrate Japanese Culture at Their Sukiyaki Dinner - Coming up on September 12 is the Farm to Fork Sukiyaki Dinner here in Sacramento. The dinner in part is meant to raise funds for the Sakuramento Tree Foundation. The Sakuramento Hanami Line is a massive planting of Flowering Cherry Trees along the Sacramento River in downtown Sacramento to provide an important civic gathering place year-around that celebrates the rich cultural contributions of Japanese Americans in California. Kitty O'Neal on KFBK.