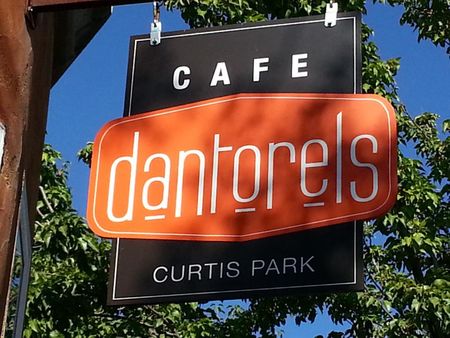 After fire closed Crepe Escape in Land Park in 2013, Meet & Eat, by the owners of Cafe Dantorels in Curtis Park, will fill the space, reports Bob Shallit in the Sac Bee.

Turns out it’s going to be called Meet and Eat and will have a mix of locally sourced menu options. The opening date? That’s still not certain. And a beer and wine license application for the place is still pending...

One employee, who asked not to be identified, said the new place will have a “European” feel with a smaller menu than Dantorels and will provide full service at dinner as opposed to the counter service offered at the Curtis Park location.

If you've never been to Cafe Dantorels, here's what then-Sac Bee dining critic Blair Anthony Robertson said in May 2014:

My search for answers about why this restaurant is so crowded so often came up with the only one that makes sense: The people in the Curtis Park neighborhood really want it there and want to see it succeed. It’s certainly not a destination eatery, and I can’t say it’s worth driving across town to check it out. I do recommend it as a place for a quick bite and some good beer or wine. It’s also a good bet for breakfast with quality coffee.

But if Cafe Dantorels is going to maintain its momentum and embrace the obvious goodwill from the neighborhood, it must take a careful look at what’s missing in the kitchen and take meaningful steps to improve the food.

If there's one thing going for it, Meet and Eat doesn't face strong competition in that part of town. I hope they find success.

Drinking with your dog: Canine-friendly breweries, wineries abound - Sacramento is fast becoming a dog-friendly city, with a dozen off-leash parks and a long list of restaurants allowing pooches on patios. For wineries and breweries, which typically don’t have the health complications of having food preparation on the premises, courting canines seems like a no-brainier. Many drinking establishments with outdoor areas easily accommodate pet lovers without degrading the experience for those with allergies or fear of dogs. Others have created special playpens to accommodate animals. All stress that owners are ultimately responsible for their dogs’ behavior. Featuring Track 7, Bike Dog Brewing, Oak Park Brewing and many others. Sammy Caiola in the Sac Bee.

Ballad of chicken hearts - All around, the flavors were simple but spot-on; the execution flawless...With the bustling open kitchen, large and striking full bar and ridiculous beer bottle list of something like 40 rare brews, Empress promises to be one of the hottest destinations in town. My only question: Can you eat too many chicken hearts? Janelle Bitker in Sac News & Review.

Sacramento Farm-to-Fork Festival sets a record — and it hasn't even started - This year, the festival features five live cooking demonstration stages, up from three last year. The festival is a chance to meet the region’s chefs, growers, farmers, grocers and other foodie-type groups in the community. The vendors include everything from food trucks to ranches and supermarket displays to restaurants and museums. Sonya Sorich in Sac Biz Journal.

New Galleria restaurant opened this week - A major new addition to the dining lineup at the Westfield Galleria in Roseville is almost ready to serve customers. Locally owned restaurant Land Ocean opened at 11 a.m. Friday, pending final approvals, according to a post on the eatery's Facebook page. It's the second location for Land Ocean, which is co-owned by Mark Platt and Karoline Platt. The restaurant serves entrees such as steaks, chicken and seafood. Sonya Sorich in Sac Biz Journal.

New wine bar to open downtown in October - Oenophiles, get ready to be wined (and dined). San Francisco restaurateur John Marco is adding to downtown Sacramento’s transformation with the opening of a new wine bar at 4th and L, next to Foundation Restaurant & Bar and one block from the Golden 1 Center. Whired Wine (which gets its name from the combination of “white” and “red”) is set to open its doors in mid-October, and will feature a rotating menu of local wines, along with six taps of regional beers and even sake. It will also serve small plates, cheese and charcuterie. Amanda Lash in Sactown Mag.

Sactown Restaurant Service - the next two years - You may think Sacramento has a fine collection of restaurants as it is. Well hold on tight because we are about to see an explosion of restaurants in the next 18 months. Some are already beating others to the punch. In June there were the openings of the remodeled Paragary's, Iron Horse Tavern, Roxie Deli, Dos Coyotes. In July we got the moved Magpie, Localis, Fish Face, and Metro Kitchen & Drinkery. The midtown Broderick's and the long awaited Empress Tavern just opened up. Here's the thing. Competition is going to start getting fierce to not only hire all levels of staff for these restaurants, but also to hold onto them. The truth is, Sacramento does not currently have enough staff for all of these restaurants. There are not enough servers, chefs, line cooks, general managers, bartenders, bussers, dishwashers, etc. for the current number of restaurants, let alone the 30+ slated to open in the next 18-24 months. Catherine Enfield on Munchie Musings.

Tank House raises the bar on barbecue - The smoky, tender baby backs – so much more flavorful and texturally rich than standard spareribs – were nearly flawless, and the succulent pulled pork and tender brisket were complementary co-stars. Hot links can be really good or not so much; these scored high on the wurst-o-meter. Allen Pierleoni in the Sac Bee.

VIDEO: Cooking With Frank Fats - Frank Fats has been a staple part of Sacramento for years and this year they will be participating in Farm-to-Fork Restaurant week. The two-week event will showcase the Sacramento region as a culinary powerhouse. Area restaurants will be hosting special events, menus and participants will have the opportunity to meet the farmers, winemakers and brewers who make Sacramento America's Farm-to-Fork Capital. Executive Chef Mike Lim shares some items off the menu. Bethany Crouch on FOX 40.