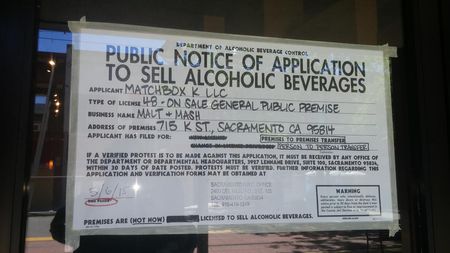 The collaboration of of Bob Simpson and Trevor Shults have revealed more details of their planned three restaurant complex at 7th & K to Sonya Sorich in Sac Biz Journal.

El Rey, the taco restaurant, fills part of a space. It's expected to open in November, serving tacos filled with braised and slow-cooked meats in addition to other menu items such as ceviche and margaritas. Shults called it a "high-energy restaurant" that will have multiple TV screens. El Rey will bring new life to a space that's been vacant for about two years...

Malt & Mash, the Irish pub, will fill a former Starbucks space that's been empty for three years. It will offer Guinness on draft, Irish coffee and a food menu with about eight items. It's expected to open in mid-November or early December.

Guests will be able to walk between El Rey and the unnamed venue without going outside. Malt & Mash, the only 21-and-older venue of the three, will require separate access.

Wrap N’ Roll’s sushi burritos inspire a deeper look - But tastes and textures come together beautifully in some of Wrap N’ Roll’s non-wrap dishes, starting with its “volcano” nachos. Wonton chips provide a crispy foundation for minced spicy tuna, which, bunched on chips, mimics refried beans. The nachos hold Sriracha and habanero mayonnaise along with the spicy tuna, yet the overall heat remains manageable enough for you to notice how freshly made the wonton chips taste. The guacamole was tasty as well, though not tasty enough to overcome my dismay that it was not wasabi. (Wrap N’ Roll does not offer wasabi, or fresh ginger, as sushi sides.) Carla Meyer in the Sac Bee.

Go, go Ricezilla: Ricezillas, Lou's Sushi - The Ricezillas ($5) at Lou's Sushi are a hefty little appetizer that'll stomp your taste buds with a dense, rich flavor before a swath of burning wasabi cleans up your palate. Anthony Siino in Sac News & Review.

Apple Hill farms open for annual autumn fun - As the air gets cooler and the leaves begin to fall, Apple Hill farms and ranches start preparing for their most popular time of year: apple season. Located in El Dorado County, Apple Hill farms and ranches feature many specialty wares from berries to wine, pumpkins to Christmas trees, some available year-round. In September, most farms celebrate the fruit they’re famous for, opening for apple season Labor Day weekend. Lydia McNabb in the El Dorado Hills Telegraph.

The Wienery: So Many Dogs, So Little Time - The warm feeling you get when walking into The Wienery can only be earned with decades of hard work and a willingness to curate what has already been established. Owners Hector Meza and Carolyn Canas kept this in mind when purchasing the business more than five years ago. Ronnie Cline in Submerge Mag.

Status Check: Milagro Centre Nears Completion - Envisioned as a higher-end dining and social experience modelled after the likes of Napa’s Oxbow Market, local developers Allan Davis and his late wife Nancy Emerson-Davis wanted to bring flavors of downtown Sacramento to Carmichael, while creating a social hub for the otherwise-decentralized suburb. Sadly, Nancy, the second of four children born to local builder Joe Benvenuti, passed away in March of this year just as the project was materializing. Andy Galloway in Comstocks Mag.