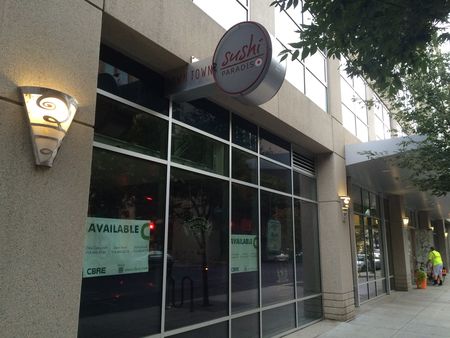 Sushi Paradiso has met the same fate as the two other restaurants that preceded it in that space - Table 260 and Trio.

The sushi restaurant located at 826 J Street closed over the last month. A For Lease sign was visible in the window during a visit on Monday evening.

The restaurant didn't leave any parting messages on the door or on their social media platforms, which had been dormant for over a year.

The Sac Bee recently described the restaurant as "Ho-Hum" in  Nov. 2014:

At this point, I cannot recommend it as a viable option simply because the quality of the food does not hold up to superior competition like Lou’s Sushi. The dinner scene lacks the vibrancy and urban style of a place like Mikuni. Why would you eat at Sushi Paradiso? Most people need more of a reason than 50-percent-off rolls.

There are other issues. During one visit, several items on the menu were not available; some had been discontinued altogether, but the menu had not been revised. That just feels like a lack of effort. The chirashi sushi – a selection of fish set atop rice – was sub-par. The fish didn’t taste fresh, especially the salmon, and the rice had clearly been sitting for too long and was dry and dull.

Sushi Paradiso originally opened in early 2014. I ate there several times at the beginning and also found the restaurant looking for a crowd. I distictly remember loving the house-cured salmon roe, though apparently that delightful ingredient wasn't enough to keep the restaurant afloat.

Sushi Paradiso is owned by Hoon "Mike" Jang, who also owns Sensei Sushi in Rancho Cordova. A late night call to Sensi Sushi was not answered.

Paragary’s: Pretty on the outside - With Scott Ostrander (formerly of another Paragary restaurant, Esquire Grill) leading the kitchen, the dishes also match the interior’s beauty. Though not quite tweezer food, Ostrander’s plates boast dots of sauces, little leaves for color and other flourishes. Yes, the $29 scallops look like they should cost $29. The $25 chicken ballotine looks like $25. With the atmosphere and excellent, attentive service, a night out at Paragary’s should feel like the ideal special occasion destination. Too bad the food is generally underwhelming. At times, crushingly so. Nothing is awful. You won’t walk away from Paragary’s repulsed, but you’ll likely walk away wondering why you didn’t spend the evening somewhere else. Janelle Bitker in Sac News & Review.

Sacramento’s Farm-to-Fork Festival: Events from rarefied to earthy - As Sacramento’s third annual Farm-To-Fork Celebration, which kicked off Wednesday, eats and drinks its way toward culmination on the Tower Bridge with a multicourse meal Sept. 27, let’s spotlight five must-do events among dozens on offer. Find details and tickets at www.farmtofork.com. Allen Pierleoni and Carla Meyer in the Sac Bee.

California Craft Brewers Showcase wows with 'can you top this?' beers - Held last Saturday afternoon on Capitol Mall under a splotchy, smoky, orange-brown sky, with the skeleton of the new downtown arena looming to the north, the California Craft Brewers Showcase served as the final blowout for the two-day California Craft Beer Summit. The summit was all bout speeches and symposia, but the beer did the talking on Saturday afternoon, and the nature of the event seemed to inspire a “can-you-top-this?” attitude in the breweries. Daniel Barnes in Sac News & Review.

On the Hunt for the Elusive Rare Beer - Looking to boost your rare-brewski cred? The easiest way is to drop by local bottle shops and grocery stores on a regular basis and strike up a conversation with the beer buyer. These people can tell you what’s trending, what’s all hype and no substance, what’s coming in next and what they’re hiding in the back for discerning customers. This technique works best when you’re looking for a trendy but not super-rare beer (I got Clown Shoes’ Photosphere Phil this way) or a beer with a time-limited but widespread release. (Think any of Firestone Walker’s Proprietor’s Reserve Series.) A couple of weeks back, the buyer at Roco Wine & Spirits slipped two Crux Fermentation Project beers in my hand and advised me to post photos of the bottles on social media. “They are Instagram gold,” he told me. Diana Bizjak in Sac Mag.

Brewery project planned in Folsom - Plans are in the works to open a brewery at the site of a former childcare center in Folsom. The mixed-use project, called The Brewhouse Plaza, centers on a building at 13407 Folsom Blvd. The building covers 8,932 square feet and was previously occupied by CCLC Folsom, a local branch of a national childcare system. Now, the space will be transformed into a brewery, as well as office and retail space. Sonya Sorich in Sac Biz Journal.

VIDEO: Craft Beer and Food - Cambi talks to Patrick Mulvaney of Mulvaney's B&L and Loomis Brewing Company about what to pair with beer! On Good Day Sac Part 1.

VIDEO: Farm to Fork Celebration - Cambi is getting educated on what the farm to fork movement is all about! On Good Day Sac Part 1 | Part 2.

VIDEO: New Businesses Open on K Street in Downtown Sacramento - With construction on the Golden 1 Center about one year from completion, the transformation of downtown Sacramento is accelerating. Last week, a ribbon-cutting ceremony celebrated two new businesses, Harvest Bar and About a Bite Bakery, sharing a space on the 1200 block of K, next to Downtown & Vine Wine Bar/Restaurant. Dennis Shanahan on FOX 40.