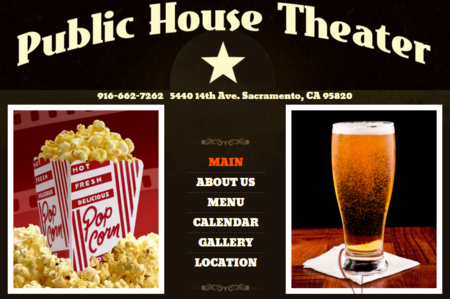 After a six month journey, Public House Theater soft re-opened over the weekend after resolving a permitting issue with city authorities.

When we last heard about Public House Theater, the owners closed the theater portion of their business in March 2015, but their pub remained open.

At the time, Sac News & Review's Janelle Bitker wrote that the theater shutdown was related to not having the proper licenses to show films (though in a subsequent Facebook reply, Public House Theater says it had "NOTHING to do with the mpaa").

On April 6, they announced that the pub was also forced to close, without explanation.

A Go Fund Me plea posted at the end of April seems to shed some light on the issue.

So we started this journey a year ago. We hired a design group to do the plans and get our permits. They lead us to believe that we had our permits and to continue building and open. We have since found out that what they had told us was far from the truth. We did not have any permits and should not have opened. We have been working on getting our drawings done by a great customer (friend). The community has been so good to us and has been behind us all the way. They had a party for us and raised almost $3000 for us. We are almost there but we have a little bit more to go. We need money to pay rent and taxes while we are closed. Thank you for your support and time.

This story is corroborated by city permitting records, which list details for a May 15, 2015 request for a Commercial Housing Department permit:

REMODEL WOP 15-005476 QUAD FEES Public House Theater Parking Lot with interior remodel of space becoming the theater. Use is allowed but the parking provided is currently under review as an Administrative Parking Review IR15-015 and the parking lot improvements are under Site Plan Review DR14-310. Signed Concurrent Review is attached.

When Pubic House Theater first hit our radar screens in Sept. 2014, it looked like it would be one of the first places locally to allow drinking at a movie theater and there was much enthusiasm for the project. Since then, the concept has become less unique with the openings of Studio Movie Grill in January 2015 and the addition of alcohol to Esquire IMAX's menu in April.

With that said, many locals seem to love the theater and rallied around it on Facebook when it looked like it was closed.

Public House Theater can be found at 5440 14th Ave., and can be found online at http://www.publichousetheater.net/.

10 Things You Didn’t Know About Bogle Winery - In September, Bogle Vineyards (Facebook, Twitter, Instagram) invited Girls on the Grid for some vino and good times at their tasting room in Clarksburg. Here’s some fun stuff that we learned about this wonderful winery...On Girls on the Grid.

Dan Barber visits Sacramento - Barber talked about the importance that chefs can play in educating and changing the way we eat. He also explained how, when he made his changes to serving dishes with rotational crops and lesser known ingredients, he switched to a prix fixe menu. Prix fixe menus mean that you eat what the chef decides instead of choosing off a menu. So, in his case, you were eating offal and rotation risotto (risotto made with other grains such as barley and millet) whether you wanted to or not. Catherine Enfield on Munchie Musings.

Folsom makes significant change for new bars, micobreweries - Folsom has made it easier for microbreweries and bars to set up shop in specifically zoned parts of the city. The Folsom City Council made those changes in two votes Tuesday night. One created a definition for microbreweries in the city’s code while establishing where they would and wouldn’t be generally permitted. Ben van der Meer in Sac Biz Journal.

Get comfy with creamy polenta and meatballs - Adamo’s Kitchen in midtown has steadily grown its customer base since opening in July 2014, demonstrating the power of word-of-mouth...As good as the wings are, our “destination dish” is creamy polenta and meatballs, topped with marinara, Parmesan cheese and basil ($10). The substantial pork-beef meatballs are tender and moist, an ideal balance of flavor and texture. Allen Pierleoni in the Sac Bee.

AUDIO: Bisto 103 Featured at the Auburn Wine and Food Festival for PlacerGROWN Month - Bistro 103 is a new fixture in Old Town Auburn, serving dishes from scratch daily using all fresh ingredients and produce from local farmers. Patty and her husband, John, opened Bistro 103 in February, in the old Tsuda Grocery Store. They honor Auburn’s rich history by integrating historical artifacts into the cozy, modern rustic design the the restaurant-and providing diners with a creative and modern farm-to-fork take on classic comfort foods, of course. On KFBK.