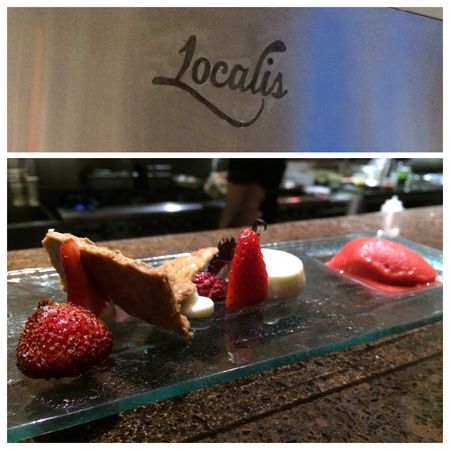 Localis, the restaurant which replaced Tuli/Trick Pony at 21st & S in July, continues to get rave reviews from the critics. The latest is from Ann Martin Rolke in Sac News & Review.

However, the food is worth seeking out. Barnum, most recently at Cibo 7 in Roseville, presents food with the eye of an artist. The menu changes daily, dependent on local and regional ingredients, as well as “curated” planters of herbs alongside the patio.

The bacon and eggs ($11) included a golden-fried square of fine-grained polenta in which a raw duck egg was nestled. The heat of the polenta barely cooked the egg, which combined with the pesto to make a creamy sauce. Crisp jamon serrano and pea shoots rounded out the dish.

Rolke did ding the restaurant for "cramped tables and lackluster patio" though. The one time I ate there, I sat at the bar/chef's table area, and I loved my experience. It could be one of the best seats in town.

Previously, the Sac Bee's Carla Meyer was effusive with her praise.

That carpaccio dish also held cherry tomatoes, dressed in a foie gras vinaigrette, that flirted with best-thing-I-ever-tasted status. More seafood and/or vegetables, and less game, would have been welcome in the tasting menu. But the meal tasted special and thought-out, and Barnum makes a good host/chef. Friendly but low-key, he mostly lets his food speak for him.

Since we're on the topic of Localis, the restaurant, led by Chef Chris Barnum, started serving lunch this week, with entrees in the $10 to $15 range. Here's a sample lunch menu. 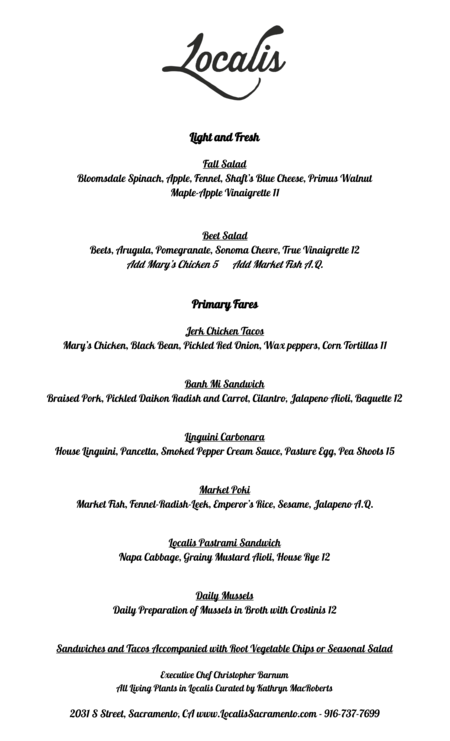 An inside look at one of the restaurants coming to DoCo - At Sauced, I was satisfied with the money I spent. Everything was cooked and presented well. Alcohol is a big component of the Sauced experience. There's a long beer list, in addition to craft cocktails. I opted for one that involved lemonade. Sonya Sorich in Sac Biz Journal.

Popular local Mexican restaurant to open downtown location - Carolina's Mexican Food, a family-run business that's been in the region for more than 20 years, is opening a location downtown. A sign is displayed outside the restaurant at 906 J St., which is across from Cesar Chavez Plaza and already has its own Twitter account. Sonya Sorich in Sac Biz Journal.

Work could begin soon on new Broadway home for The Kitchen - Planning entitlements in hand, developers of a Broadway building that will become a new home for The Kitchen are moving ahead on building permits. Scott Maxwell, one of the partners in the proposal, said depending on the city, construction could get underway by year’s end. Ben van der Meer in Sac Biz Journal.

Icing on the Cupcake - After closing its doors for part of 2014, the Rocklin-based dessert shop Icing on the Cupcake is now expanding, with plans to open two new locations by early 2016. The new spots – which will be located at 2379 Iron Point Road in Folsom and at 1730 J Street in midtown – were chosen based on customer feedback via social media, word of mouth and orders. In Sactown Mag. (Fourth Item.)

Jimmy John’s Now Open in Natomas - A new Jimmy John’s Gourmet Sandwiches is now open in Natomas Town Center. As reported by THE NATOMAS BUZZ in May 2015, the new eatery is the first franchise for the sandwich chain in the greater Sacramento area. On Natomas Buzz.

Happy Hour Hound: 3 Fires Lounge - When football season kicks off, I begin my annual search for the best Monday night happy hours in Sacramento. There’s always the popular locations that we all know and love, but as they quickly fill up, I often like to duck out and find an alternative to the crowded sports bars and pubs. Surprisingly there are still some hidden gems that I have been lucky enough to uncover. Ronnie Cline in Submerge Mag.

Good Eats Made Easy: Caviar delivery service launches partnerships with Sacramento restaurants - Sacramento dining is about to get a little more convenient. Food-delivery service Caviar, acquired by the San Francisco-based Square in August of 2014, uses a fleet of drivers to offer delivery services for restaurants that wouldn’t otherwise invest in their own on-staff delivery. The company works in 17 markets across the nation, including Minneapolis, Chicago, Seattle and Portland — and starting Oct. 13, Sacramento has been added to that list. Allison Joy in Comstocks Mag.

AUDIO: Hank Shaw's Crowdfunded Book, 'Buck, Buck, Moose' - One of the Northern California’s celebrated food bloggers and author is forgoing the traditional publishing route for his latest cookbook. Hank Shaw, the 2013 James Beard award winner for Best Food Blog for Hunger Angler Gardner Cook, has turned to Kickstarter to fund "Buck, Buck, Moose," his third cookbook. We’ll talk with Shaw about why he decided to go solo after publishing two successful books for legacy publishers and how "Buck, Buck, Moose" will be different from any other old venison cookbook. Rick Kushman on Capitol Public Radio.