Dining News: 5 Things to Know about the 'World's Biggest Pop-Up Pub' on Saturday 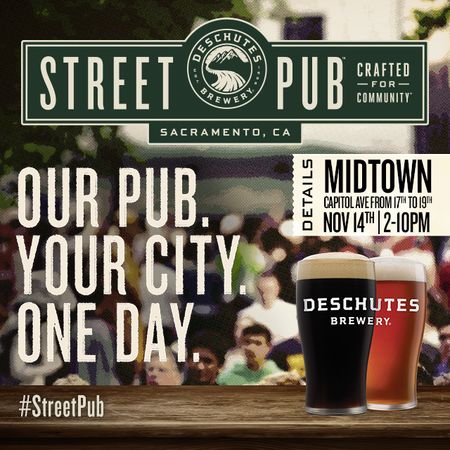 While the annual Georgia/Flordia rivalry game has been dubbed the World's Largest Outdoor Cocktail Party, Sacramento will host the World's Biggest Pop-Up Pub this weekend. Here's what you need to know about it.

2. Sounds great. When and where is it?

The event will be held on Capitol Ave. between 17th and 19th Streets on Saturday, Nov. 14 from 2 to 10 p.m. Don't forget to bring a jacket. The high temperature on Saturday's expected to be only 68 degrees.

The event is free and family friendly.

4. Will they have food and music?

5. Who does the event benefit?

The proceeds from the event go to Runnin' 4 Rhett, named after Rhett Seevers, a boy with cerebral palsy who passed away at the age of 7. Their mission is to LET RHETT’S STORY INSPIRE those who feel defeated, UPLIFT those who feel down and ENCOURAGE all to take that first step, and MOVE INTO LIFE.

You can learn more by visiting https://events.deschutesbrewery.com/events/street-pub-sacramento/.

Taste: Delicious Cold Brew Coffee Delivered to Your Door Every Week Via Seasons Coffee - Coffee geeks rejoice. Local coffee roaster Seasons have found a new way to get quality coffee into your hands without you even leaving the house. And while $19 for a 64-ounce bottle may seem on the pricey side at first glance, do remember you pay close to $5 for a subpar macchiato or blended shit drink at Starbucks. Eddie Jorgensen in Submerge Mag.

Three Mile Brewing in Davis Sets Opening Date - Construction is underway at Three Mile Brewing, the small brewery and taproom going into the Court N’ Cedar courtyard at 231 G St. Joe Runner, one of the owners, said they’re shooting to open on Friday, Jan. 15. Wendy Weitzel in the Davis Enterprise.

VIDEO: Let’s Do Breakfast - The second Corner Bakery Cafe in the Sacramento area is set to open in Elk Grove on Monday, November 2nd. Tina Macuha on Good Day Sac.

VIDEO: Dog Town Foods - Dog Town Foods is a food truck that has the best hot dogs in the area and they’re dishing up some menu favorites. Cody Stark on Good Day Sac Part 1 | Part 2.