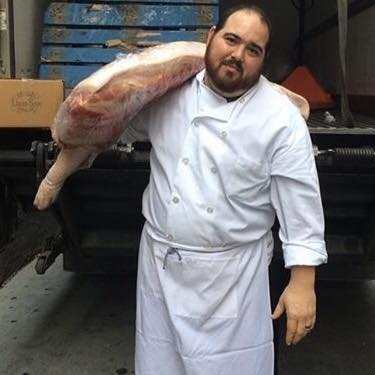 Chef Jason Azevedo has been tapped by the Paragary empire to be the chef de Cuisine at Hock Farm.

According to his Facebook page, he started the new gig on Wednesday.

Most recently, Azevedo was executive sous chef at Esquire Grill, where he and executive chef Pedro Depina teamed up for Hotgoberfest. The event/promotion celebrated the whole hog by serving every bit of a Rancho Llano Seco hog, including porchetta, chicarrones, terrine and more.

Prior to that, Azevedo was the chef at Mighty Tavern in Fair Oaks, chef de cuisine at Nuggett Market and the chef at Old Soul.

He's probably best known for his skills as a butcher and in making charcuterie.

In addition to that, Azevedo has been very generous with his time. I ran into him at a Sac Bacon Week event, and he talked to me for more than 15 minutes about the economics of running a restaurant and things chefs have to consider as they create their menus. It was very classy of him.

I've not always been a fan of the food served at Hock Farm. I have confidence Azevedo will remedy that.

A Twitter direct message to Azevedo and a phone message left at the Paragarys corporate office seeking comment in recent days were not returned.

Hock Farm is located at 1415 L Street and can be found online at http://www.paragarys.com/sacramento-restaurants/hock-farm.

Sandwich or ‘hamwich’? - We got a craving for one when we spotted the sign for the HoneyBaked Cafe outside the HoneyBaked Ham store in Fair Oaks. You know HoneyBaked ham, right? It’s the applewood-smoked spiral-cut ham (topped with “sweet honey crackling glaze”) that’s so often a guest at traditional holiday dinners. Allen Pierleoni in the Sac Bee.

VIDEO: Cooking: It’s Nacho Truck… It’s Mine - Nathan Hufford and Keith Franzen of It`s Nacho Truck stop by the studio with some delicious nachos of all varieties. Paul Robins on FOX 40.

AUDIO: Kushman By The Bottle: Wine For Thanksgiving - Thanksgiving is coming up and resident wine expert Rick Kushman has some useful wine advice for the big meal. Kushman will also explain a new study about wine, the atmosphere and how our body's chemical response to it. On Capitol Public Radio.

VIDEO: Cheese Platter 101 - Picking out the correct cheese to serve at any party is important that's why Tina is with Whole Foods' Certified Cheese Professional Danielle Slater who will teach us how to make a cheese platter for any party. On Good Day Sac.

VIDEO: Cooking: Sloughhouse Inn & Elegant & Easy Gourmet - Mae is in the kitchen with Betsy Hite cooking up a big Thanksgiving spread. On FOX 40.

VIDEO: Pieology Donates to ‘Stand Up and Play’ - Pieology -- Roseville and Downtown -- will be donating 20% of sales on Veterans Day to a veterans organization that makes it possible for paralyzed veterans to "Stand Up and Play". Kevin Patton, spokesperson from Stand Up and Play, demonstrates how the Paramobile units on works and allows veterans with impaired mobility to have a little extra fun. Alisa has the details. Alisa Becerra on FOX 40.