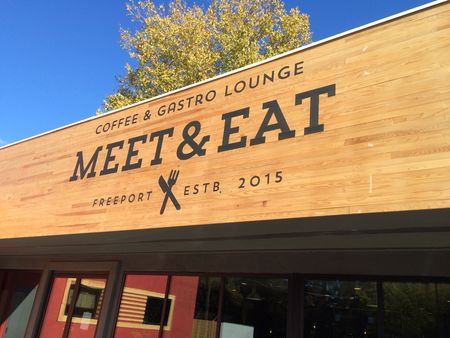 Since then, it's held its soft opening.

The current menu, which displays words such as "artisan" and "organic," features a variety of interesting options. Morning selections range from french toast ($10) to breakfast tacos ($12). Later in the day, a "taco bar" option features three tacos served with tortilla chips for $13 to $15.

There's an assortment of salads, burgers and sandwiches as well. Many include unique twists, such as the veggie sandwich ($13) that filled with beets and eggplant and served with fries. The salmon salad ($13) is equally intriguing, as its toppings include paprika-filled green olives.

The Sac Bee's Bob Shallit also has a couple more details on the place:

The plan is to offer “high-end” burgers and tacos, salads and a lot more. Breakfasts, traditional and European style, also will be served. Once its alcohol permit is awarded, the restaurant will have 24 craft beers on tap along with a diverse wine selection.

Read the entire article in the Sac Bee. (Third item.)

From what I hear, the liquor license will be in place before Thanksgiving. I look forward to giving the place a try.

So bubbly: High Mountain Tea Creama, ShareTea Davis - Because it's from the birthplace of boba, we expect Taiwanese company ShareTea to craft pretty legit tapioca drinks, even amid its rapid expansion across the United States. Luckily, the Davis post meets those lofty expectations. Janelle Bitker in Sac News & Review.

Happy Hour Hound: Club Pheasant - I can easily see myself heading to West Sacramento for happy hour or a proper dinner at Club Pheasant in the near future. While I was there I overheard customers raving about the lamb stew and steak sandwiches, both of which I’m excited to try. Club Pheasant’s happy hour is Tuesday through Friday from 4 p.m.–6 p.m. Ronnie Cline in Submerge Mag.

VIDEO: Sweet Potato Vodka - You can make vodka from sweet potatoes and Cambi is checking it out! On Good Day Sac Part 1 | Part 2.