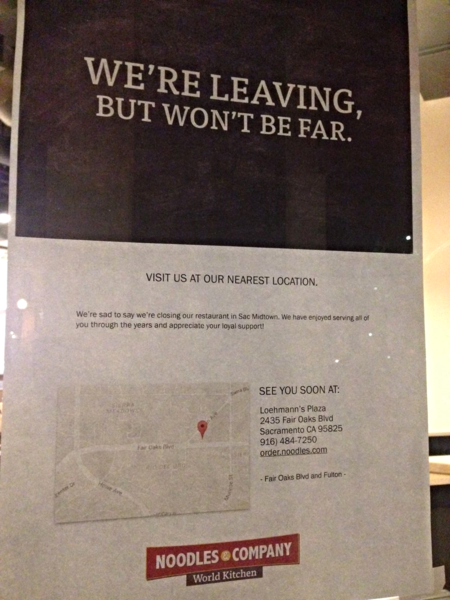 Noodles & Co., a chain restaurant serving noodle dishes from all over the world, closed its location on 16th street.

The location was open less than 6 months in the new Legado de Ravel building at 16th & O streets.

By Thursday evening, the exterior signage had already been taken down, and a sign on the door read:

We're sad to say we're closing our restaurant in Sac Midtown. We have enjoyed serving all of you through the years and appreciate your loyal support.

A phone call to the phone number on their Facebook page goes to a pre-recorded message that says in part:

Thank you for calling Noodles & Co. This restaurant has closed. We have enjoyed being your neighbor...

The location has also been removed from the restaurant's corporate Web Site. 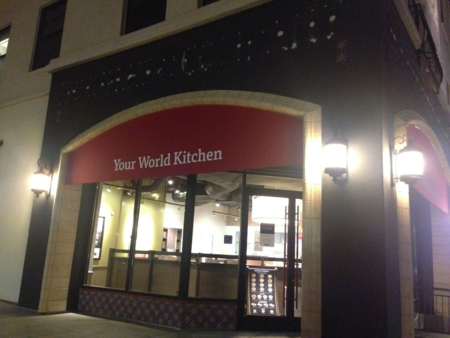 Earlier on Thursday, Noodle & Co. reported a loss of $9.8 million for the quarter and told investors that they would be closing 16 restaurants by the end of the year. There's no word if this closure was one of the 16.

Despite the closing of the midtown location, fans of Noodles & Co. can still find the restaurant at Loehmann's Plaza, Rancho Cordova, Elk Grove Citrus Heights, Roseville x2 and Rocklin.

Thanks to loyal Cowtown Eats readers for tipping me off to the restaurant's closure.

Why an Oregon brewery is coming to midtown - Midtown Sacramento is getting a new brewery, but only for one night. Deschutes Brewery from Bend, Ore., will hold an "ultimate craft beer block party" as a fundraiser for a local nonprofit. The family-friendly event will be held Nov. 14 on Capitol Avenue from 17th to 19th streets. It's scheduled to begin at 2 p.m. and end at 10 p.m. All proceeds from the "street pub" will benefit Runnin' for Rhett, a nonprofit that offers fitness programs for adults and children throughout the Sacramento area. Sonya Sorich in Sac Biz Journal.

A cinematic feast: 8 food films more palatable than ‘Burnt’ - In “Burnt,” Adam gets some blowback for his bullying, but not enough to make storytelling sense. Elsewhere on the jerk front, Adam seems to lack regard for his customers, or food in general, apart from its ability to win him Michelin stars...As a film-turned-food critic, I can recommend the movies (available for home viewing) below over “Burnt.” We’ve also designated each film’s pièce de résistance, or its most mouth-watering or story-defining moment. Carla Meyer in the Sac Bee.

Fish Face: Addicted to poke - The strength of the poke lies in the utter freshness in every piece of seafood and produce served. Ingredients are respected and smartly executed. Service is friendly and informative, which is great as those used to stagnant sushi menus may be daunted by the sheer number of options as to what fish goes with what sauce goes with what add-ons...All I can say is that if Kru didn’t solidify Ngo’s role as Sac’s seafood master, Fish Face certainly does. Garrett McCord in Sac News & Review.

Koreana Plaza owner wants to turn Rancho Cordova into destination spot - A bit of Las Vegas-style glitz is coming soon to Koreana Plaza, the Rancho Cordova shopping center that’s perhaps the region’s most impressive commercial tribute to diversity. Owner Byong Joo “B.J.” Yu is in the midst of expansion at the center, which already includes a Costco-size supermarket and food court with more than 80,000 products from well over 100 countries. Next month, Yu is opening an upscale Korean barbecue restaurant, to be called Red Alcove, where guests can cook their own steaks and seafood on tabletop charcoal grills. Bob Shallit in the Sac Bee.

VIDEO: Clarksburg Check Out - Jason Maloney is checking out some local amenities Clarksburg has to offer at Husick's Country Store. On Good Day Sac.

VIDEO: Cooking with Magpie Cafe - Ed Roehr from Magpie Cafe is in the studio whipping up some pumpkin guacamole -- perfect for the fall season. On FOX 40.