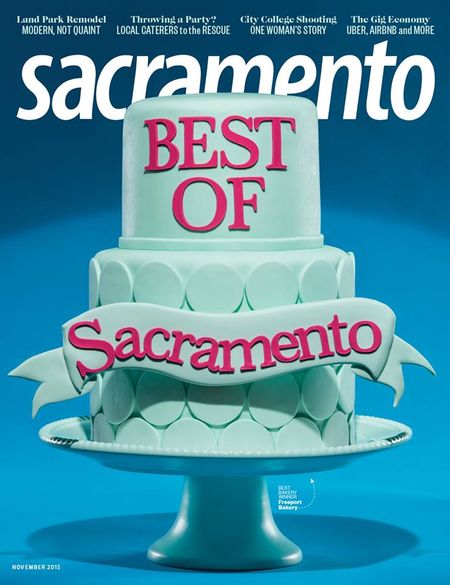 I'm not a huge fan of Best Of contests where readers choose (and that's why you haven't seen one on Cowtown Eats).

It becomes more of a popularity contest rather than something based that a reasoned critic might select. It also tends to clog up my social media feeds with appeals for people to vote.

However, after perusing 2015 Sac Mag's winners based on the votes of their readers, I think the list gets it mostly right. None of the winners were blatantly wrong, though I might have selected a different winner if I took the time to vote.

Here's a short sample of the winners:

BEST OF THE BEST (MONEY NO OBJECT)

BEST OF THE BEST (INEXPENSIVE)

Happy Hour Hound: Iron Horse Tavern - Sacramento has a new laid-back and mouthwatering place where happy hour dreams really do come true. Specialty cocktails, pint-sized brews, wings, wood-fired pizzas and fried goodies are only some of the options at Iron Horse Tavern. Being an unhappy and starving artist, I had a ripe $20 bill burning a hole in my pocket, so I decided that this had to be the place. Plus, I don’t think there’s anything better than drinking somewhere on a patio at 3 o’clock in the afternoon. Derek Kaplan in Submerge Mag.

Blondie's Pizza in Davis - Work has begun on Blondies New York Pizza Co., after the City Council allowed a hardship exemption from the 45-day moratorium on larger bars. The owners agreed to a long list of restrictions on hours, security and alcohol-related promotions. Wendy Weitzel in the Davis Enterprise.

Midtown brewpub to open with bit of ‘Soul’ - A couple of Bay Area transplants are hoping to launch a craft beer success story in the midtown Sacramento building where the Old Soul coffee company got its start. Alex Larrabee and Larissa Meltz recently leased space at 1716 L St. fronting the alley-facing cafe that Old Soul opened a decade ago and retains as its flagship location. Bob Shallit in the Sac Bee.

Doughnuts of death - Just in time for Halloween, a business has started up with a focus on terror, carnage and gore. We’re talking doughnuts here. Donut Madness opened this month at 2648 Watt Ave. with what store manager Jake Smith calls a “horror film vibe." Bob Shallit in the Sac Bee. (Second item.)

Try It: Mikuni's James Roll - If you're one of those people who cringe at the thought of sushi, the James Roll from Mikuni will most likely change your mind. It's loaded with salmon, panko-crusted shrimp, crab, and even a little bit of eel to get you out of your comfort zone. Sara Stidham in Sac Mag.

Worth It? Caviar – Restaurant Delivery - From my experience with other delivery services, Caviar is different in that the food is delivered HOT. The driver uses a hot bag similar to pizza companies. The packaging from the restaurant was the same as before but this time I did not need to reheat the food prior to consumption. Also, there is no order minimum. I have found using other services that I need to order way more food than I want because of their minimums. One service in town has a $75 minimum for Bombay. That’s a lot of naan! Cristina Guccione on Girls on the Grid.

Feast Q&A: A career in meat-cutting, well done - As manager of the Corti Bros. Market meat department, master butcher Mike Carroll has been a familiar face for 37 years. He’s the guy who will cut a steak to your specs and suggest how to cook it. He’s the guy who singlehandedly corned 3,000-plus pounds of brisket each St. Patrick’s Day. “Beef has been great to me,” he said. Carroll, 56, is retiring Friday, Oct. 30 (“I thought Halloween would be a good time to go”), but will return part-time in December to “supervise” the hectic holiday rush. After that, he plans to travel with his wife, spend time with family and hang a “gone fishin’ ” sign whenever possible. Allen Pierleoni in the Sac Bee.

VIDEO: Sacramento bakery bakes up some ghoulish treats - Megans Bake Shop in West Sac has all the spooky treats for you this Halloween. On KCRA.

VIDEO: New Legislation Lets Craft Liquor Distilleries Sell Alcohol - After some hard lobbying, Steller got the legislature to pass and the governor signed AB 1295. It’s a bill that allows tasting rooms to sell a small volume of spirits, hold special events, hold a majority interest in a handful of restaurants, and lets tasters experiment with mixed drinks. Ben Deci on FOX 40.

Regarding the Sac Magazine list -- really, SacMag readers, best pizza "Round Table"? That makes as much sense as "Land Ocean" being selected for appetizers. Not that its terrible, but there are so many more better tasting and more inventive choices.