Dining News: Sneak Peek at the Not Yet Open Meet & Eat 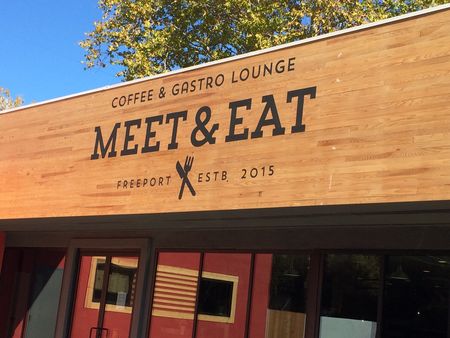 Over the last four days, I've been getting tips that Meet & Eat on Freeport Blvd. had opened. Their new sign prominently announced their location, and cars filled the parking lot.

I stopped by during my lunch hour today to discover that they're not quite open yet, but I was able to get a quick preview. (Apparently, their sign was supposed to stay covered until they were ready to open, but Mother Nature had different plans and the recent storms forced their hand.) 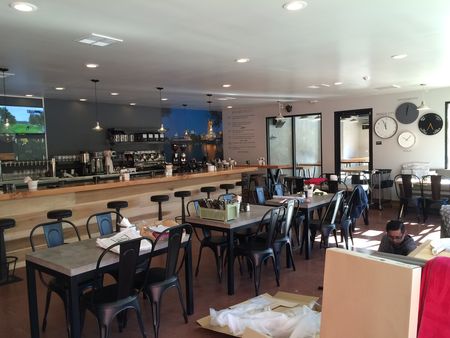 The space was still a work in progress with workers busily assembling furniture and working on the finishing touches. However, they had turned what was a decaying and empty space into a handsomely-decorated neighborhood spot. It felt like a modern version of a soda fountain. 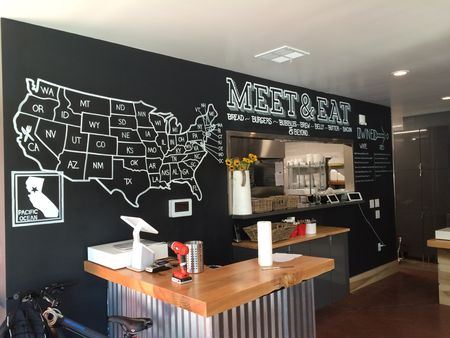 The staff present weren't ready to commit to an opening date, though barring any hiccups, my guess is that they'll be open well before Thanksgiving. They were also still finalizing the menu and weren't quite ready to share.

I live in Land Park and I'm excited to have a new neighborhood spot with ample parking to frequent. Meet & Eat is owned by the same family who run the very solid Cafe Dantorels. I look forward to giving this new restaurant a try.

When it opens, Meet & Eat will be located at 3445 Freeport Blvd.

Café Dantorels - Having lived in Land Park for well over 7 years now, I’m a little embarrassed that it’s taken me this long to try Café Dantorels in neighboring Curtis Park. This café has been on my “to try” list for years and I finally had just the right opportunity to walk over on a recent Saturday for lunch. Liz Conant in Sac Foodies.

Twelve Rounds Brewing Company - The kitchen is also a work in progress. Murphy partnered with the owners of The Red Rabbit to run the food program, which will focus on small plates, mostly charcuterie. That won’t happen until sometime next year. In the meantime, customers can order food from nearby Evan’s Kitchen and Hot City Pizza, and food trucks make regular appearances as well. Marybeth Bizjak in Sac Mag.

Willpower killer: Fallin' Off d'Wagon, Hook & Ladder Manufacturing Co. - Every week, it seems, I vow to cut back on cocktails and yet every night there I am again, ready to drink the day's stresses away. Hook & Ladder has the perfect remedy for this dilemma, the aptly named Fallin' Off d'Wagon ($9). It's a simple concoction—just bourbon and an apple-ginger shrub—with a full flavor profile. Rachel Leibrock in Sac News & Review.

Can new owners break curse that has killed three similar restaurants in their space? - Sacramento Pizza Co. is filling a restaurant space where at least three other pizza shops have failed. One of its owners knows what you're thinking. "You can call us kind of crazy," said Anay Patel, co-owner and general manager of Sacramento Pizza Co. at 2700 E. Bidwell St. in Folsom. After months of preparation, the business begins its soft opening on Sunday. Sonya Sorich in Sac Biz Journal.

Beer Run: Pangaea’s beer dinner speaks of Sacramento’s surging scene - I just experienced one of the best beer events I have ever attended in Sacramento. I’m referring to the $120 per person beer-pairing dinner at Pangaea Bier Cafe in collaboration with Russian River Brewing of Santa Rosa. Here was a cozy neighborhood pub in Curtis Park partnering with a craft brewery widely considered one of the best in the world. It was a fundraiser for breast cancer awareness, featuring Russian River’s acclaimed Framboise For A Cure, a tart and fruity barrel-aged sour that is sold only in October. It has become an annual tradition and a great community endeavor in Santa Rosa, with all proceeds from this limited-release beer going to Sutter Breast Care Services of Santa Rosa. Blair Anthony Robertson in the Sac Bee.

VIDEO: Davis Extends Bar Moratorium For A Full Year After Deadly Nightclub Stabbing - City officials did grant one new business application after the owners of Blondie's set to open here appealed. This after the owners agreed to a large number of strict conditions. Kelly Ryan on CBS 13.