Dining News: What Southwest Air's In Flight Magazine Says You Shoud Do in Sacramento 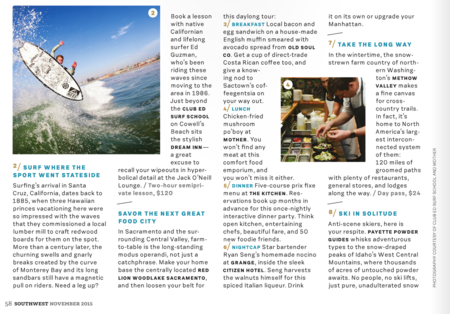 As usual, when out of towners make recommendations, there are some hits and some misses. Author Alison Miller has more hits than misses, though when she's wrong, she's really wrong.

First, what the reporter gets right, in what she calls the Next Great Food City:

However, she gets one thing hugely wrong.

Lodging: "Make your home base at the centrally located Red Lion Woodlake Sacramento..."

Not sure what it's centrally located to unless she wants to be in the Costco-Arden Fair Mall-REI triangle.

But it's always good to see Sacramento get some good ink in national publications.

AUDIO: Best Of Sacramento Party And The March Of Dimes - One of the biggest events in the Capital City is more than just a party this year, it’s a 15th Anniversary Party and a celebration of more than $4.5 million donated to the March of Dimes. Nov. 12 is the annual Best of Sacramento Party, hosted by Sacramento Magazine. Sacramento Magazine Publisher, Joe Chiodo and March of Dimes Volunteer Jessica Bracy talk about the event's impact on Insight. On Capitol Public Radio.

New housing taking shape at downtown Sacramento landmark - As for the ground floor of the 105-year-old Ransohoff Building, Fathy said the partners are in talks with several users interested in taking over the 8,200-square-foot space vacated by Pyramid Alehouse in March 2013. Some of the potential users have expressed interest in keeping the beer-making equipment that Pyramid left behind. Bob Shallit in the Sac Bee.

VIDEO: Rita’s Frozen Custard - Rita's is known for their gelati, custard, cream ice and Italian ice so Nha is in Folsom checking out all the tasty flavors. Nha Nguyen on Good Day Sac.

AUDIO: The Wienery is Thriving as Customers Rebel Against WHO's Processed Meat Findings - There was a lot of fuss last week when the World Health Organization came out with a report saying bacon, hot dogs and other processed meats can cause cancer. Bacon and hot dog lovers rebelled and said they were not giving up their meat! KFBK talked to customers at The Wienery in East Sacramento earlier in the week, and then on Friday they came in studio to talk about their hot dogs. Owner Hector Meza and his wife, Caroline about The Wienery, which has spent the last 45 years specializing in what you call old fashioned steamed hot dogs. Kitty O'Neal on KFBK.