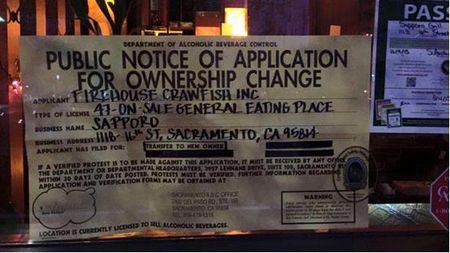 Sapporo Grill has been sold and will become a Firehouse Crawfish, according to a notice required by the state's Department of Alcoholic Beverage Control.

The restaurant specializes in a seafood boil where diners select a seafood, a flavor (original, fusion, lemon pepper, garlic roasted, butter, etc.) and level of spiciness from mild like a rookie to call the fire department. Customers are encouraged to wear a big and eat the food with their hands, though utinsils are also available.

This is how the restaurant describes itself on its Web site:

Firehouse Crawfish is a Sacramento family owned business, we take great pride in using only the finest and freshest ingredients.
We have been happily serving our neighbors since August of 2011.

Our restaurant specializes in crawfish along with other fresh seafood. If you're not in the mood for crawfish, we have a wide variety of seafood with something for everyone. We offer lots of delicious flavors and seasoning options in a fun, casual and friendly atmosphere.

According to the hostess who answered the phone when I called on Tuesday evening, Sapporo Grill is expected to stay open through mid-January.

Sapporo Grill, which first opened in 2009, can be found at 1118 16th St. and can be found online at sapporogrill.com.

TBD Fest co-founder sued, accused of breach of contract - Clay Nutting, co-founder of TBD Fest and partner in LowBrau/Block Butcher Bar, has been named in a lawsuit over nonpayment of a $200,000 loan. The breach of contract and fraud lawsuit was filed Dec. 9 in Sacramento Superior Court on behalf of Katrina Arnaud, a Sacramento-based certified public accountant who says she took out a mortgage on her house to provide half of the loan she gave to Nutting, an organizer of the three-day concert that incorporates art, food and fashion. Chris Macias in the Sac Bee.

Gluten-free bakery Pushkin’s expanding in midtown Sacramento - Pushkin’s, the popular midtown gluten-free bakery, is expanding its operations, taking over the ground floor of a new mixed-use building at 1813 Capitol Ave. Co-owner Danny Turner said Wednesday he and his wife, Olga, will move their fast-growing business into the new, 3,000-square-foot location in April and offer breakfast and lunch as well as baked goods and coffee. Bob Shallit in the Sac Bee.

Behind the Apron with Mary: Local Foodie Gift Guide - Believe it or not, Christmas is less than 10 days away! In an effort to make your gift shopping a little easier, I have created a small local gift guide for the foodies in your life. Foodies can be tough to shop for as they likely already have a stocked kitchen. If you want to give something a little more personal than a gift card to the Paragary’s or Empress Tavern, this guide is here to help (although there is no shame in the gift card game). Remember to shop small, and no one is looking if you end up keeping any of these gifts for yourself! Mary McCune on Girls on the Grid.

Feast Q&A: The Porch’s patrons won’t be home for Christmas - But a little digging reveals other options for dining out Friday, Dec. 25, in Sacramento. Among establishments serving meals are the Hyatt Regency hotel, which is putting out a giant brunch buffet ($64.95 adults; $32.95 children; 916-443-1234) from 10 a.m.-3 p.m.; East Sacramento’s Hoppy Brewing Co., offering a limited menu from 2-9 p.m., and midtown’s Southern restaurant The Porch, open from 1-8 p.m. The Porch had been in business only a few weeks when it served its first Christmas Day meal, in 2011. We spoke to co-owners John Lopez and Jerry Mitchell about what is becoming a holiday tradition. Carla Meyer in the Sac Bee.

Why Bobby Coyote opposes proposed Davis tax on ‘Big Soda’ - Bobby Coyote, owner of Davis-based Dos Coyotes Border Cafe, says he is sympathetic to arguments concerning health problems caused by sugar. But he opposes the soda tax out of the fear that it would create a logistical challenge at his restaurants. Dos Coyotes offers fountain soda dispensers and free refills, Coyote said. He said he doesn’t know how his staff would track consumption of the sweetened beverages. Allen Young in Sac Biz Journal.

Two area restaurants prepare to close - After nearly 30 years of business, Vince's Ristorante at 8901 Elk Grove-Florin Road will have its final day of business on Dec. 20. In a phone interview, officials with the restaurant said the closure is due to retirement. Vince's covers about 5,000 square feet. Sonya Sorich in Sac Biz Journal.

VIDEO: Smoke Alarm Prime Rib with Yorkshire Pudding - Betsy Hite from The New Old Sloughhouse Inn is in the studio cooking up her popular Smoke Alarm Prime Rib with Yorkshire Pudding. The New Old Sloughhouse is taking reservations for Christmas eve and New Year's eve dinners. They will have both a Prime Rib and ham special for both those dates, as well as the regular menu. Paul Robins on FOX 40.

VIDEO: How to Make the ‘Yule Log’ - Mae is in the kitchen with Carol Clevenger from Freeport Bakery learning how to decorate the a yule log -- a popular seller at the bakery. On FOX 40.

AUDIO: Corti Brothers Provide Unique Gifts and Food for the Holidays - It is a Sacramento institution on Folsom Boulevard. Corti Brothers began in 1947 with a mission to expand the culinary experiences of their Sacramento neighbors. Corti Brothers offer delicacies and wines from diverse cuisines that are not easily available elsewhere in Northern California. The Cortis also wanted to employ people who were just as interested in their products as they were. It is a place where you can find many unique items for Christmas gift giving, or for yourself. Darrell Corti joined us in studio. Kitty O'Neal on KFBK.