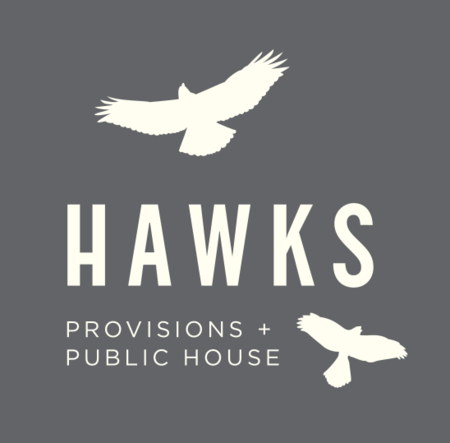 For the first week or two, the restaurant will only be open for dinner service. When they get their sea legs, they'll expand to add lunch service.

Here's how the Sac Bee described the restaurant back in January:

The fine-dining destination Hawks in Granite Bay will lose the white tablecloths when two casual, sister restaurants debut in adjacent buildings sharing a patio. The smaller space will specialize in pre-made grab ’n’ go breakfast (an emphasis on baked goods), lunch and take-home dinner, with a “well-edited” menu of sandwiches and salads. Note: It won’t be a deli. The larger sit-down gastropub will have a full bar and stained-concrete floors, along with Hawks’ same dedication to quality and farm-to-fork philosophy.

Hawks Public House was first announced in 2013. It's good to see that it finally opened. I look forward to giving the place a try.

Hawks Public House is located at 1525 Alhambra Blvd. and can be found online (eventually) at http://hawksprovisionsandpublichouse.com/.

Beer Run: A craft brew language primer - Our breweries have won significant awards, the top-tier brewmasters have separated themselves from the pack, the overall quality of the beer is high and the range of styles in Sacramento is broader than ever. With such excellent brew flowing around town, what follows is an informal primer to get you up to speed and help you feel at home at your favorite brewery or beer-centric pub. Blair Anthony Robertson in the Sac Bee.

Holiday cheer - Enjoy the holiday season in luxury-mode at Formoli's Bistro, which is offering a swanky deal this month in the name of “Celebrating Home for the Holidays.” Because Sacramento is rad, and we can feel the seasonal magic right here. With Formoli's holiday light package, you'll get picked up by a limo, escorted to a four-course dinner, then driven through the Fabulous Forties neighborhood to admire the twinkling, lit-up displays. Janelle Bitker in Sac News & Review.

Tacos forever - The newest is the reincarnation of Cafe Soleil, formerly in Cesar Chavez Plaza. While Cafe Soleil served American food with some Mexican dishes, Soleil Mexican American Cuisine (2790 Stockton Boulevard) serves Mexican food with some American dishes. That means breakfast burritos, huevos rancheros, street tacos, quesadillas, tostadas and enchiladas—plus some sandwiches, like turkey and tri-tip, and salads, including a chicken Caesar. The bright-orange kiosk most recently housed Sacto Chicken Co., which served Caribbean fried chicken until it closed in February. Prior to that, it was an orange-freeze stand. Janelle Bitker in Sac News & Review.

RIP Vampire Penguin in Davis - Vampire Penguin, the shaved snow dessert house at 130 G St., Suite C, has closed. A sign on the door refers prospective customers to its locations in Sacramento and Elk Grove. It opened in January. Wendy Weitzel in the Davis Enterprise.

Vegetarian restaurant coming to Folsom -- 'It's the future,' owner says - After patiently witnessing the many meat-centered businesses announced this year, vegetarians finally have a chance to cheer. Peach, a new vegetarian cafe, is expected to open in mid-January at 807 Sutter St. in Folsom's Historic District. It will replace The Black Rooster, a coffee shop and cafe that closed late last month after three years. Sonya Sorich in Sac Biz Journal.

VIDEO: Holiday Baking and Decorating — Happy Birthday Darren!! - Susie Cakes stopped by FOX40 to show us how fun it can be to decorate baked goodies with the kids this holiday season. They also helped us wish our Meteorologist Darren Peck a very Happy Birthday! Bethany Crouch on FOX 40.