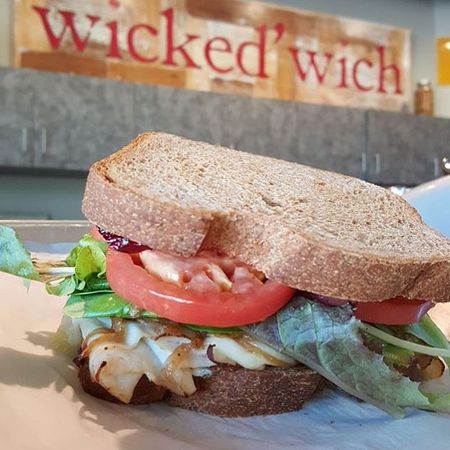 Community Center Café Changes for the New Year
The owners of Wicked ‘Wich located inside the Community Center are closing current café operations as of November 23. The owners are looking at a new menu and format, and anticipate re-opening by January 19, when Los Rios College Spring Semester starts and the students return from break. Information on the new menu and format will be shared as it is received.

I reached out to Matt Chong of Team Broderick for more info, but he did not return an e-mail earlier in the week.

Team Broderick, formally known as Working Class Heroes, has been busy this year. They're currently working on working Saddle Rock, replacing Capital Dime at 1801 L Street. In recent months, they've opened a second Broderick Roadhouse at 18th & L and Localis at 21st and S. I have faith that they'll make good use of the West Sac space come January.

As a side note, chef Matt Cannedy left Wicked 'Wich in November and is now the Executive Sous Chef at Esquire Grill. That position became open when Chef Jason Azevedo was promoted to become Chef de Cuisine at Hock Farm.

Temple, Old Soul land on Coffee Review best of the year list - Coffee Review has chosen its top 30 coffees of 2015, and four Sacramento-roasted batches made the list. Temple Coffee and Tea led the way at No. 6 with its Panama Don Pepe Estate Geisha Single-Origin Espresso. It was released back in October and received a 96-point rating. Janelle Bitker in Sac News & Review.

Bad news for Mimi's Cafe fans - Mimi's Cafe is shuttering one of its Sacramento-area locations. The restaurant at 3511 N. Freeway Blvd. in Natomas will have its final day of business on Dec. 20, according to a spokeswoman for the company. The location opened in 2006. Sonya Sorich in Sac Biz Journal.

Happy Hour Hound: Easy on I - If you spend enough time at neighborhood bar Easy on I, it will quickly start to become a place “where everybody knows your name.” Owners Mark and Carol Hoyt know all the regulars, always welcome new patrons and are always caught laughing behind their bar. It’s obvious that Mark and Carol have a love for what they do, which is running one of the best watering holes on I Street. They make the bar and grill, on the corner of 18th and I, seem more like your local hang out spot. Easy on I is a casual, low-key bar and grill that is perfect for a Friday night or Wednesday afternoon. It’s full of everything you want at your local bar: good beers, comfortable atmosphere, awesome food and friendly people. It’s the kind of bar that you can grab a drink, a bite to eat, and meet someone new sitting on the bar stool next to you. Amy Serna in Submerge Mag.

Linden teen wins $10,000 on Food Network’s ‘Chopped Junior’ - The Food Network threw everything from orange push-ups to a vegetable sushi roll at 14-year-old Linden resident Elisabeth Watkins, but she kept her cool and came out a winner on a recent episode of “Chopped Junior.” Cathie Anderson in the Sac Bee.

AUDIO: Fox & Goose Offers Old English Food for Christmas - For those of you wanting a taste of Old England for Christmas, or any time of year, there is Fox & Goose Public House on R Street. The British establishment has been offering Grub and Pub since 1975. Jessa Berkey and Peter Monson from Fox & Goose joined us in studio for our Friday Food segment. Kitty O'Neal on KFBK.

VIDEO: Crispy Cuban Rolls at the Cheesecake Factory - With the holiday party season upon us, it's time to share the perfect appetizer recipe for your guests that are not only delicious but easy to make at home! Cody Stark on Good Day Sac.